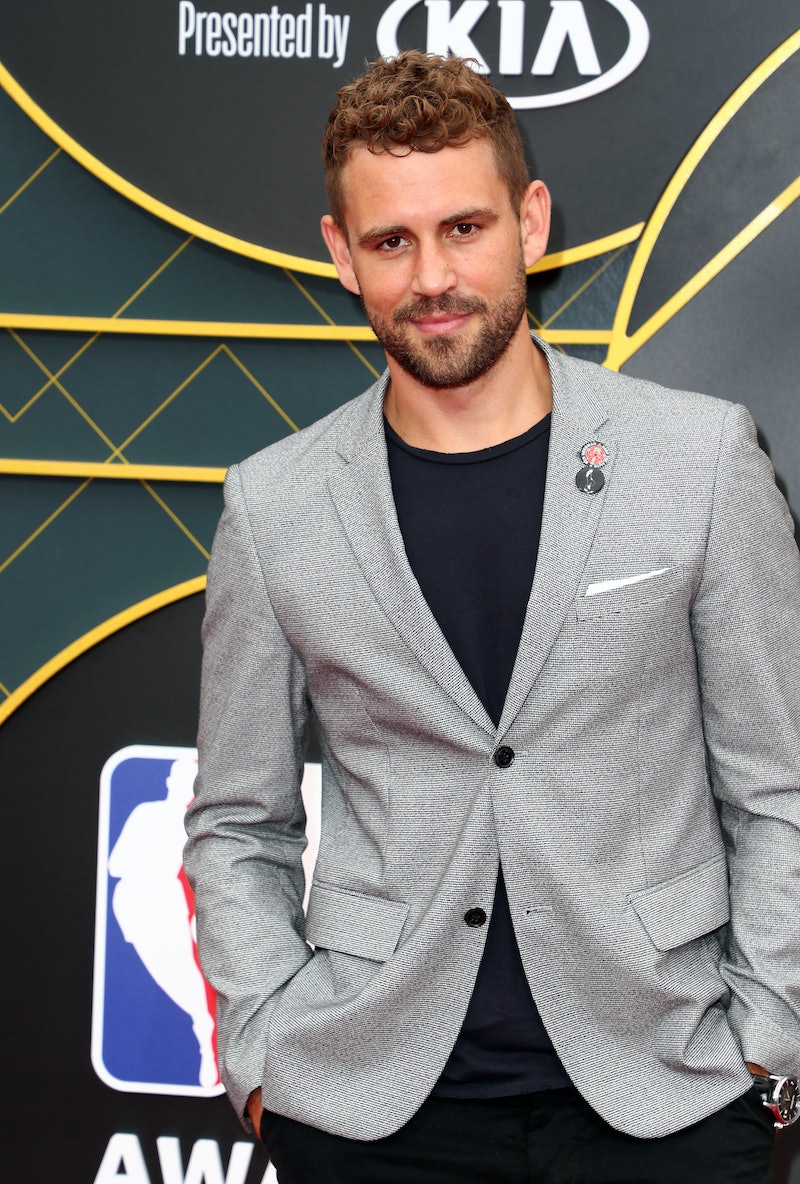 Ashley Iaconetti and Jared Haibon's Aug. 11 wedding brought out your favorite Bachelor alums in droves. And one of those former contestants in particular, franchise mainstay Nick Viall, really got the most out of the wedding experience. Nick caught the bouquet at Jared and Ashley I.'s wedding, proving that the former Bachelor may just be the next person to find everlasting love.

Thankfully, many of the guests at Ashley and Jared's nuptials chronicled all of the fun on Instagram, including the one and only Nick. In addition to posting numerous snaps on his account, the former Bachelor lead also took to his Instagram Story to share some of the sillier moments from the festivities (including a fun-natured, love-filled back-and-forth with fellow Bachelor Ben Higgins). One of those moments tied back to the classic throwing of the bouquet, which, as Nick related to his fans, he actually "caught."

Yep, the reality star jokingly showcased that he had caught the bride's bouquet, proudly showing off his catch in the snap. It's certainly no red rose, but maybe it could be a sign that there's love in Nick's future. After looking for love on The Bachelorette (twice), Bachelor in Paradise, and The Bachelor, does it really come as a surprise to see that the contestant has sought out the bouquet, aka the classic good luck charm, on his quest to find love once again?

In addition to fittingly "catching" the bouquet, Nick also got his party on with the rest of his Bachelor family. In particular, he hung out with Dean Unglert, who, like Nick, has appeared on multiple Bachelor franchises (his first appearance being on Rachel Lindsay's season of The Bachelorette). On his Instagram Story, the host of the Viall Files posted a selfie with Dean and another former Bachelorette contestant, Chris "Cupcake" Strandburg.

On Dean's Instagram Story, he posted a clip from user Bachelor Nation Scoop, in which he and Nick could be seen getting down on the dance floor. He captioned the video with, "couldn't have asked for a better dance partner."

Of course, in addition to posting photos of himself at the wedding, both with his bros and the bouquet, Nick also posted pics of the couple of the hour, Ashley and Jared. Well, kind of. On Aug. 12, the day after the big event, the Bachelor took to Instagram to congratulate his two friends on getting hitched with a pretty hilarious photo from their special day.

In the photo, Nick, looking dapper in his suit might I add, could be seen posing front and center with Ashley and Jared posing in the background, off focus. He captioned the post with a cheeky, "My Best Friends Are Married! What an amazing day where all the focus was totally on them."

Thanks to the Bachelor alums' many social media posts from the occasion, it was clear that the reality TV fam had a blast celebrating Ashley and Jared's special day. And while the bride and groom undoubtedly had the very best time during their wedding, it's safe to say that Nick, bouquet-catcher and Bachelor extraordinaire, had the greatest time at the festivities, too.