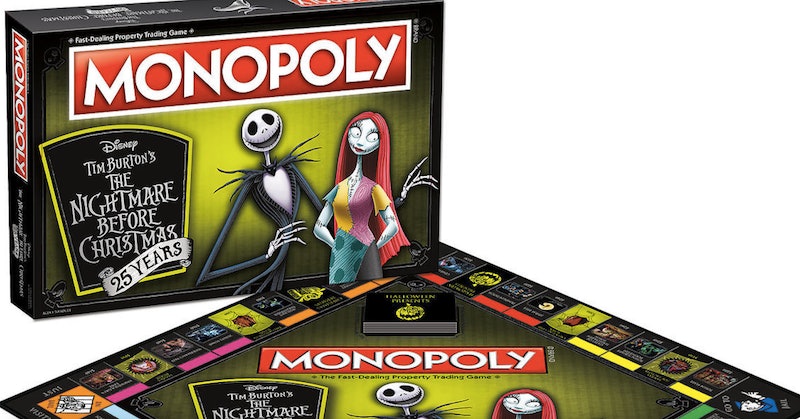 What's this? What's this? It's Nightmare Before Christmas games for anyone who is obsessed with the movie 25 years after its release — and who loves a game night. Even though The Nightmare Before Christmas came out way back in 1993, there is plenty of merch related to the movie hitting shelves, some of it specifically in celebration of the anniversary. And since the film came out on October 29, 1993, the anniversary and the new items are just in time for Halloween.

Three games have been released in honor of The Nightmare Before Christmas' 25th year: Yahtzee, Operation, and Monopoly. There is also a Nightmare Before Christmas Clue game on the market, as well as playing cards (and many, many other non-game items), but they aren't special 25th anniversary editions. Read on for details on the games that have been released or to purchase them for yourself.

The Yahtzee game includes dice and a score pad covered with pictures of the characters — including Sally, Oogie Boogie, Zombie Duck, and Evil Teddy — and a dice cup shaped like Jack Skellington's head.

This brightly colored Monopoly game features money with Jack's face on all the bills and game pieces in the shape of Sally, Oogie Boogie, Evil Teddy, Zombie Duck, Jack, and the Mayor's Hearse. The locations in the game have also been changed to reflect locations from the movie, like Dr. Finkelstein's lab and Jack's tower.

It's time to operate on Oogie Boogie and he needs bats, bugs, bones and more strange items removed. The game also includes Oogie Boogie voiceovers from the movie.

These aren't in specific honor of the 25th anniversary, but Shop Disney also sells Nightmare Before Christmas playing cards that feature Jack as the king, Sally as the queen, and Zero the dog as the jack.

Move over Ms. Scarlett, because Sally is taking over. This Nightmare Before Christmas version of Clue replaces the faces and locations of the original game with characters (ex. Jack and the Mayor) and locales from the movie (ex. Oogie's lair and Christmas Town).