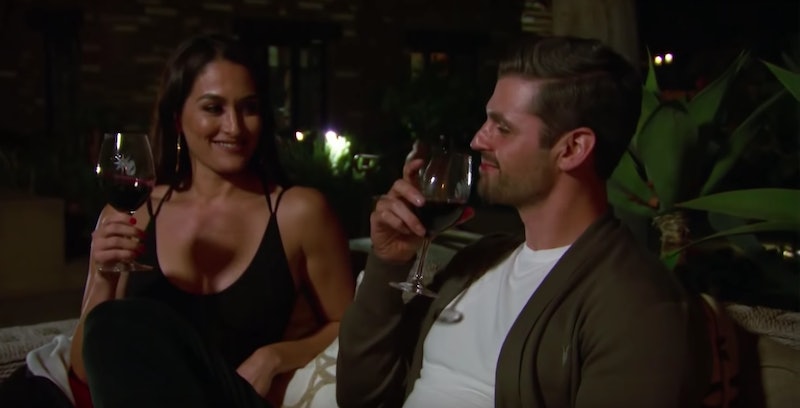 It's been a few months since they climbed into a gondola and split a bottle of Belle Radici, but Nikki Bella and Peter Kraus want a second date. Well, well, well, it sounds like the gods of reality TV matchmaking were onto something with that Total Bellas and The Bachelorette crossover. Again, their first and only hangout happened a while ago, and sure, it sounds like they've all but let things fizzle out, but according to Nikki, the two have talked about getting together for another date. Cue the Daniel Bryan YES! chant.

When speaking with Hollywood Life at the 20th Annual Image Awards last Friday, the Total Divas star said she and the former The Bachelorette contestant would like to get together for a second date. She explained,

This second date dream may never pan out, but hey, at least we got to see Kraus woo Nikki with a bottle of vino from her own wine line. I don't know about you, but I am always happy to watch two incredibly endearing reality stars hang out.

On the Sunday, Feb. 24 episode of Total Bellas, Nikki went on her first official date since her split from John Cena. A few days before the episode aired, Nikki and her twin sister, Brie Bella, appeared on Busy Tonight and talked all about her evening out with Kraus. "That was like my first like, just, like first date in what, over six to seven years,” Nikki began. “It was so awkward and I totally got drunk.”

The date itself wasn’t awkward; Nikki just wasn’t prepared to go on her first post-breakup date in front of a bunch of cameras. As she told host Busy Philipps,

“I think [going on a first date on camera] is what embarrassed me a lot. Here I’m having this first date, and all of a sudden, I look to my left and it’s like, two camera crews. And I’m like, ‘Oh, my god, this is so weird.’ I didn’t even want to flirt because it just was so awkward.”

Brie chimed in to say her twin sister did flirt but called it “really bad” and said that she “needs help on dating.” Nikki reiterated that it has been a minute since she was last single, adding that Brie, who has been married to Daniel Bryan since 2014, would also probably be rusty on a first date— especially if that date was being filmed for their reality show. On the flip side, Kraus was the runner-up on Rachel Lindsay’s season of The Bachelorette, so it’s probably safe to assume he didn’t feel like a fish out of water when it was time to go on a blind date on a reality show.

While their gondola adventure on Total Bellas may be both the beginning and end of the road for their romantic relationship, it seems like Nikki and Kraus genuinely enjoyed each other's company. Another round of the YES! chant, please.