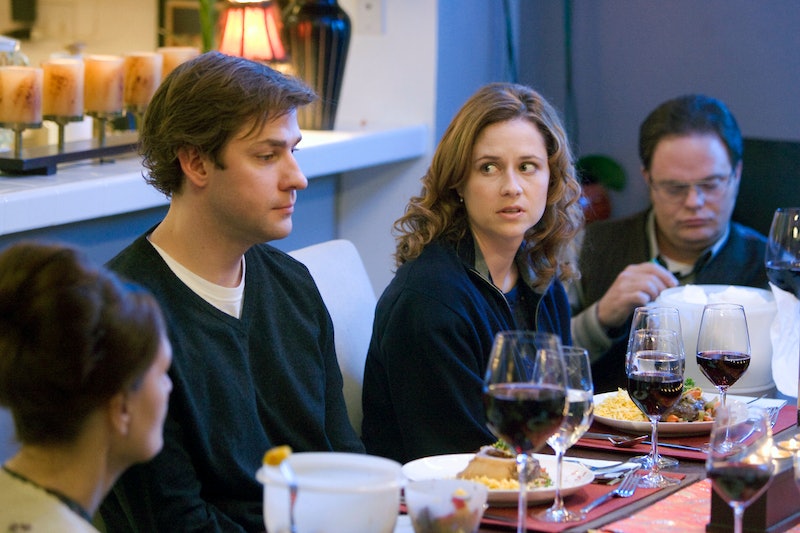 Sure, fans know what The Office looks and sounds like, but do they know what it smells like? Thanks to COZI TV, they soon will. Next month, the network is airing a special scratch and sniff episode of The Office. And seriously, everyone's going to want to get a whiff of this. (That's what she said.)

On August 26 at 10 pm et, COZI TV will air The Office in Smell-A-Vision hosted by Jan Levinson herself, Melora Hardin, so fans can get a sense of all the unique smells the show has to offer. Specifically, they'll be airing the legendary Season 4 episode, "The Dinner Party," according to a press release obtained by Bustle. This means fans will finally know what Jan's candles smell like. It might even convince them to do what Jim couldn't and get in on the ground floor of Serenity by Jan. Breathe in and you can almost smell the serenity now.

So, how does this all work? Well, COZI TV is giving away thousands of scratch-and-sniff cards to those who want to smell the osso buco Jan is braising for three hours, only to have Michael dip it in his glass of red wine. Luckily, that meat wine is also one of the other odors fans will get to scratch and then sniff.

There are a few ways for fans to get their hands on these scratch-and-sniff cards for the upcoming event. Those in New York City attending the off-Broadway show, The Office: A Musical Parody can get one. Also, those heading to San Diego's Comic-Con later this month. All are available while supplies last.

For those who aren't attending either of those events, don't worry, the network's also giving them out online. All fans have to do is request a card at the COZI TV page on Facebook or at COZITV.com, and they'll get them to you via the mail. But, sign-up soon so that you don't miss out on this odorous TV event.

Also, good to note, that if you miss the first go-round, COZI TV plans to re-air it on Labor Day (Sept. 2). This second airing will also help kick off their next Office event, "A Hardin Day's Night" on Sept. 22, which will celebrate some of Jan's best moments over the years. Obviously, one of those is everything she's doing in "The Dinner Party," in which Jan and Michael host the soirée from hell that ends with a Dundee through Michael's plasma TV.

In Rolling Stone's oral history of the "greatest Office episode ever," Hardin explained that she and Jenna Fischer (aka Pam Beesly) spent most of their time laughing through takes. "Every time they turned on the camera, either [Fischer] or me would just be absolutely in fits of laughter," she told the magazine. "It probably took the longest of any of the other scenes, because we had to literally take a break and walk away to stop laughing. And I don’t even know what we were laughing about."

Certainly, fans have some idea what might have been making them crack up. Soon, they'll also be able to smell what they might have been smelling on that night where Hunter's song really did make everything alright.

More like this
Everything To Know About 'Scream 6'
By Jack Irvin and Jake Viswanath
'Stranger Things' Season 4 Volume 2 Trailer Teases New Episodes Coming July 1
By Grace Wehniainen and Gabrielle Bondi
The 'Ms. Marvel' Review Bombing Controversy, Explained
By Radhika Menon
Fans Think Beyoncé’s “Break My Soul” Is Calling For A New Great Resignation
By Sam Ramsden
Get Even More From Bustle — Sign Up For The Newsletter