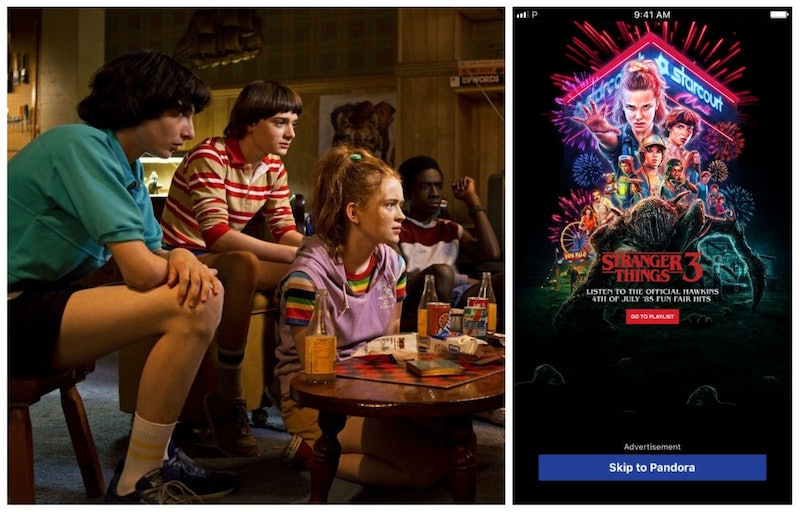 Stranger Things Season 3 is just around the corner — but if you absolutely can’t wait for it, good news: Pandora just dropped a Stranger Things playlist that should help keep you occupied in the meantime. Called “Stranger Things Summer Of ’85,” the playlist is available to stream on Pandora starting on July 3 — which means it’ll probably make a pretty fantastic backyard barbecue playlist if you’ve got one of those going on sometime this week, too. Survivor, Dire Straits, Foreigner… the gang’s all here. They’re full of hairspray. And they're ready to rock.

“Stranger Things Summer Of ‘85” is described as a mixtape, but it plays like a radio station — station 85.5 WHWK “The Beat,” to be precise. It even includes a wisecracking DJ going by the name KC Hawk making classic, between-song interstitials. Listen carefully, though; these interstitials are more than just entertaining. They set the scene for the season: Shout-outs to the Starcourt Mall underline Hawkins’ newest shopping destination as a key location for the season; there’s talk of a fair launching at the Hawkins Fairground on July 4th (i.e. the day Season 3 is set to drop), with attractions like the Gravitron, a Ferris wheel, and midway games all ready to entertain the crowds; and, uh… well, let’s just say that there may also be a distortion or two from time to time. Who knows what that radio tower might pick up, given its proximity to the Upside-Down, am I right?

And the songs? This isn’t just a random collection of ‘80s tunes. Note that the mixtape’s name is specifically “Stranger Things Summer Of ’85”: That name tells you exactly what to expect from the collection of tunes. Each song was a major hit of 1985, and each would have been on the airwaves that summer — the exact season and year in which the third season of Stranger Things takes place. Tears For Fears’ “Shout,” for example? That one hit the number one spot on the Billboard Hot 100 on Aug. 3, 1985 and stayed there for several weeks. Heart’s “What About Love,” meanwhile, was originally released on June 1, 1985 and peaked at number 10 on the Billboard Hot 100 on Aug. 24. Both of those tunes — and tons more with the same air of era-appropriateness — can be found on the mixtape.

Tie-in soundtracks being released for popular TV shows are by no means a new thing, but more recently, it’s become de rigueur for these kinds of shows to harness that power in via music streaming services. HBO, for example, curated Spotify playlists for all of the major Game Of Thrones Houses in honor of that show’s final season, which just finished airing in May. But this Stranger Things collaboration between Netflix and Pandora really takes it to the next level: Tons of thought went into the curation of this mix (I still can’t get over the fact that it’s historically accurate), making listening to it a surprisingly immersive experience. And I, for one, am absolutely Here For It.

The Stranger Things mixtape on Pandora drops on July 3. To access it, launch the app, then tap the welcome graphic’s “GO TO 1985” button to time travel to the mid-‘80s — er, to go to the “Stranger Things Summer Of ‘85” mix. From there, you’ll be able to rock out to the best of 1985’s hits. You can also just head to this link to play the mixtape in Pandora's web player.

(Speaking of time travel, gun fact: Back To The Future, which was originally released during the summer of 1985. Back in March of 2018, when Season 3 was just about to enter production, it came out that Back To The Future would be one of the season’s pop cultural touchstones, not unlike how Ghostbusters had previously been incorporated into the second season. Is the time travel implication of the “GO TO 1985” button coincidence? Who knows, but I wouldn’t be surprised if it was absolutely intentional.)

Stranger Things’ third season premieres on Netflix on July 4. Who’s ready to head back to Hawkins? (I am, I am!)