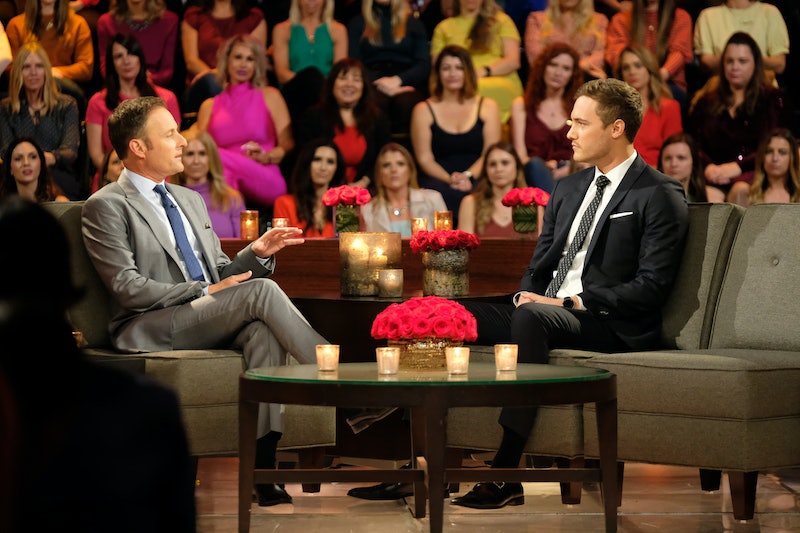 If you were shocked by how Peter Weber's (aka Pilot Pete) season of The Bachelor played out, you shouldn't be — astrologically speaking, that is. Just to recap: In a wild rollercoaster-ride of a finale, Weber got dumped by Madison Prewett and engaged to Hannah Ann Sluss. He then ended said engagement to pursue an off-screen relationship with Prewett. While this sort of messy drama is very typical for The Bachelor franchise, it also makes sense given Peter Weber's astrological compatibility with Madison Prewett & Hannah Ann Sluss.

Weber was born on Aug. 4, which makes him a fiery Leo. Leos are known for being energetic, charming, and self-confident. They love being adored and admired and know how to leave a lasting impression on pretty much everyone they meet. Since Leo rules the fifth house of passion, romance, play, and theater, they have a tendency to be a bit overdramatic at times, enjoying all the chaos that comes along with falling in love.

According to Mary Cole, professional astrologer and tarot card reader, Weber's actions throughout the season pretty much align with his sun sign. "Given the circumstances that Peter was put in on The Bachelor, his chart might explain why he only kept women around who ‘showed him’ their hearts or expressed to him how much they cared," Cole tells Bustle. Leos are ruled by the sun and can have a bit of an ego at times. So, it would reason that Weber might go for women who are a bit more open about their feelings for him.

Leos also tend to care about how they come off to others. According to Cole, they like being seen as good people, which may be what pushed Weber to propose to Sluss, despite his deeper feelings for Prewett. "In true Leo fashion, he didn’t want to disappoint anyone, and leaned into his external charm and immediate praise from his family, rather than relying on his internal honesty to make a decision," Cole says

Speaking of Sluss, her birthday is April 25, making her a Taurus. The bull tends to be patient, gentle, stable, sensual, and deeply emotional. They have pretty high standards when it comes to love, they're very loyal, and expect that same kind of devotion in return. While Taurus doesn't usually get mad, they'll stand up for themselves if provoked, which is exactly what Sluss did when she told Weber off.

Sluss and Weber were drawn to each other early on, but always faced astrological adversity. Their elements aren't really compatible (fire and earth don't mix), and they're both fixed signs, which means they can both be a little stubborn. According to Cole, both Taurus and Leo are powerful and dominant, meaning there's a lot of room for them to butt heads. While Venus-ruled Taurus will always put the partnership first, Leo will prioritize their own needs.

If you're wondering whether their marriage would have lasted, Cole says that's unlikely. Like all fire signs, Leos tend to chase after their desires. If Weber ever felt like something was missing in his relationship with Sluss, he might have left her to pursue something (or someone...) else.

Enter: Madison Prewett. Weber and Prewett are both fire signs, and when you mix fire with fire, you get something explosive. Prewett's birthday is March 26, making her an Aries. Like Leo, Aries is very passionate and full of life. They're more practical than emotional, but also fiercely independent. Aries tend to stand their ground when faced with a challenge, which is why Prewett had no problem sticking to her beliefs throughout, despite clashing with Weber (and his mother, Barb).

"Madison's pragmatic nature and ability to hold her own might upset the family, but it'll tame Peter," Cole says. "Most other signs are unable to match Leo’s flame in a way that keeps it under control. Peter will always be able to soften and calm Madison down when she's brewing on the inside, and Madison will always be able to guide Peter’s bursting personality in the right direction."

Since Leos tend to care most about what other people think, Weber most likely struggled with how to please both his family and Prewett. But based solely on sun sign compatibility alone, he and Prewett have better odds of lasting than he would have with Sluss. That being said, Bachelor nation may be headed for another big bang.