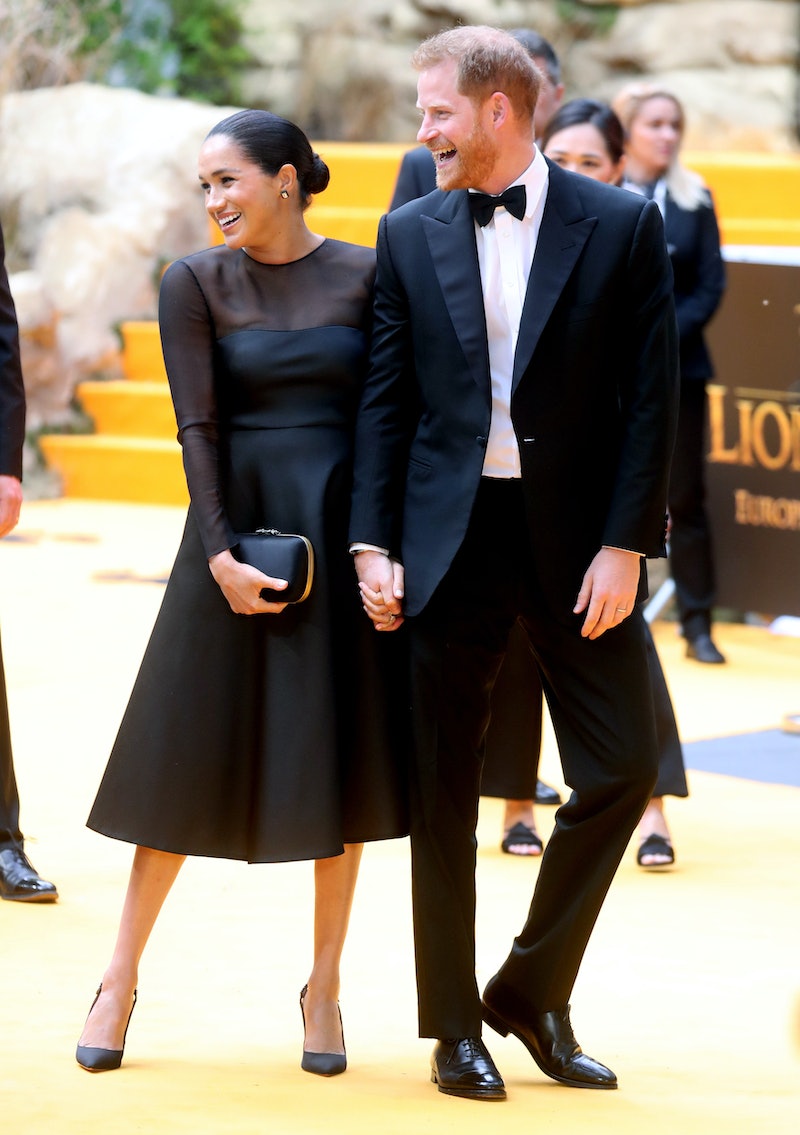 What better first movie premiere to attend as a duchess than one with a royal title? The Duke and Duchess of Sussex Prince Harry and Meghan Markle attended The Lion King premiere at a European launch event on July 14. The event, held in London's West End, was Markle's first red carpet occasion as royalty, and it's also where she got to meet Queen Beyoncé.

The buzz around the live-action remake's star-studded cast has been non-stop ever since a cast list surfaced over a year ago, and now that the world premiere is right around the corner, the stars themselves are stepping out to shake some hands and promote their work. This event in particular was not only promoting the movie, but it jointly echoed Harry and Meghan's conservation efforts for African wildlife, and was appropriately timed ahead of their African tour that's planned to take place in October. According to Us Weekly, they will reportedly visit four countries: Malawi, Angola, Botswana, and South Africa. Their newborn son Archie, who will be five-months-old at the time of the trip, will join them.

In the movie, The Pride Lands of The Lion King are never given an exclusive country of origin, but they celebrate the continent's wildlife and culture, which is appreciated by many, including the royals and the film's cast. Ahead of the film's screening, Meghan and Prince Harry were even introduced to Beyoncé, who voices lioness Nala, as well as her husband, JAY-Z.

The moment Beyoncé and Meghan hugged, a new galaxy run by royal women could have very well spontaneously manifested in outer space. It was a royal meeting that fans have long anticipated. And they both seemed excited for it, too. They embraced like long-time friends.

Back in February when Markle was still pregnant, Beyoncé made it a point to publicly show support for her. Having three young children and a busy career of her own, she understands the intensity of the motherhood title. "In honor of Black History Month, we bow down to one of our Melanated Monas," she wrote on Instagram. "Congrats on your pregnancy! We wish you so much joy."

And of course, before being introduced to Bey and the rest of the cast, Meghan and Prince Harry greeted fans as they headed inside. According to People, Meghan wore a black, midi-length Jason Woo dress with sheer long sleeves and black, pointed-toe Aquazzura shoes. She accessorized with a black Gucci clutch. Beyoncé wore a golden-yellow gown with a high slit that almost perfectly matched the night's golden set. She too, gripped a round clutch on the opposite side of her hug with the duchess.

Royal reviews of the film have yet to go public, but the couple is surely satisfied with its related Protect the Pride efforts. According to Disney.com, the company has already donated $1.5 million to the Lion Recovery Fund in the movie's honor to help save Africa's deteriorating lion population, and its partners will continue to donate. Certain limited edition merchandise and celebratory events will also benefit the campaign.

Knowing that the live-action Lion King is not only supporting a worthy cause, but that it also united Meghan and Queen Bey is reason enough to love the movie already.