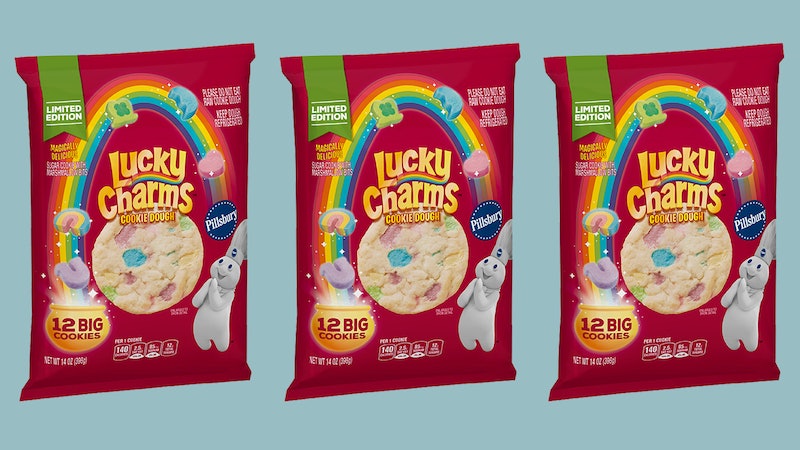 Attention cookie fiends, cereal heads, and lovers of all things nostalgic: gird your sweet tooths — sweet teeth? Sweets tooth? I digress, but Pillsbury has ready-to-bake Lucky Charms cookies and they are the dessert trifecta. If you felt something, that was just every person’s inner child doing a collective happy dance.

Courtesy of Pillsbury, each package of Ready to Bake! Lucky Charms Cookies is exactly what it sounds like: pre-made and pre-formed cookie dough inspired by your favorite breakfast cereal. Each sugar cookie comes complete with marshmallow bits inspired by Lucky Charms cereal, including pieces of hearts, horseshoes, blue moons, clovers, and rainbows. (Stars, red ballons, pots of gold, and the recently added unicorn marshmallows could not be reached for comment at this time.)

Sold in packages in 12, the new Lucky Charms cookies are currently available at select retailers including Hy-Vee and Walmart. Per an emailed press release, they’ll be rolling out nationally starting in January. You can buy two packs for $5, but you’ll want to act quickly because they are limited edition. Unfortunately, such nostalgic goodness cannot last forever. It would be too powerful and the cookie aisle would crumble entirely. You can check on Pillsbury’s website to see where the Lucky Charms cookies are being sold near you.

If you haven’t gotten back on the cereal train, choo-choo, baby. Cereal is back, despite nasty rumors that millennials have killed it. (We’d never betray our Holy Trinity: Cap’n Crunch, Toucan Sam, and Tony the Tiger.) If you were never on the cereal train to begin with, now is the time to hop on.

In November, Kellogg’s brought back Eggo waffle cereal, an early-aughts favorite the internet was begging for. While I never tried the OG Eggo cereal, I can confirm that the reboot is delicious. It’s sweet without being too sickly. It maintains a good crunch while soaking in milk. It looks like little, baby Eggos, for god’s sake! Name a more perfect cereal, I will wait.

Eggos aren’t the only food getting the cereal treatment. Just last month, Post and Hostess announced the launch of Twinkies cereal as part of their cereal-snack collaboration. While each piece of Twinkies cereal is not filled like its cream-filled predecessor, it does boast the golden cake and cream flavor the snack is known for.

Still unimpressed by this cereal and snack innovation? Perhaps you will be charmed by this Pop-Tarts cereal. Do you long to eat teeny, tiny Pop-Tarts in milk and with a spoon? Of course, you do. You’re only human, after all. In August 2018, Kellogg’s brought Pop-Tarts cereal back with two flavors: Frosted Strawberry and Frosted Brown Sugar Cinnamon. While they don’t look exactly like a “Honey, I Shrunk The Pop-Tarts” version of the snack, they do have itty-bitty sprinkle-adjacent toppings.

Underwhelmed even still? Feast your eyes on this Pillsbury Cinnamon Roll cereal. Each pillow-y square piece features a crunchy, cinnamon-y outside and creme-filling on the inside. Filled cereal! Cinnamon rolls you can eat in one bite! Your avocado toast could never.

In addition to these snack-inspired cereals, be on the lookout for the cereal-inspired snack, Pillsbury’s Lucky Charms cookies. They are the magically delicious dessert your nostalgia seeks.

More like this
Andie From 'How To Lose A Guy In 10 Days' Is A Total Gemini
By Nina Kahn
Dunkin’s Valentine’s Day Lineup Includes A Drink That Tastes Like Dessert
By Alexis Morillo
15 Black-Owned Liquor & Wine Brands To Add To Your Bar Cart
By Alexis Morillo
12 Aphrodisiac Desserts To Spice Up Your Valentine’s Day
By Kaitlyn Wylde
Get Even More From Bustle — Sign Up For The Newsletter
From hair trends to relationship advice, our daily newsletter has everything you need to sound like a person who’s on TikTok, even if you aren’t.