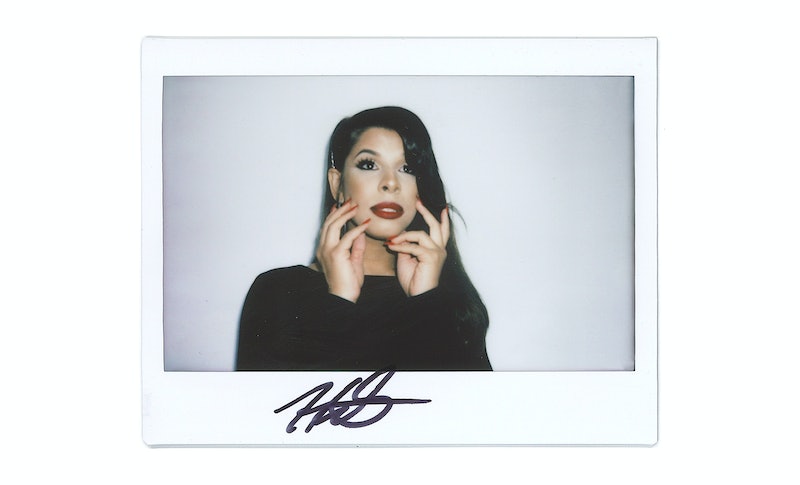 When celebrities hang out with Bustle writers, we want to give them the chance to leave their mark. Literally. So we hand them a pen, a piece of paper, a few questions, and ask them to get creative. This time, Pose star Hailie Sahar is leaving her mark in the Bustle Booth.

In an ensemble cast like Pose, every character eventually gets their moment to shine. Luckily, as Season 2 comes to a close, it's Hailie Sahar's Lulu that's starting to open up to fans. "She's the character that you constantly have to watch because she is one that is being dissected slowly and little by little," Sahar says. "There's so many complexities to Lulu."

Now that Lulu is a single mother in charge of House Ferocity, the stakes are higher and viewers will get to see her come into her own. "Lulu is a very young character and when I was a house mother in Los Angeles, I was only 18," Sahar says. "The challenges that I faced at the time were my peers bucking my authority or not taking me seriously, but still having to juggle my personal life and then still keeping in mind I have people that are looking up to me and following me. And so with Lulu, that's what's happening."

Sadly, this shift in responsibility for Lulu on Pose came at the cost of losing her best friend and co-mother Candy (Angelica Ross) who was murdered in Episode 4. Sahar was devastated to lose her onscreen partner Ross, but she knew the importance of depicting the violence and trauma that still impacts the trans community in 2019. In fact, just days before Candy's death episode, a trans woman named Layleen Polanco, a member of House of Xtravaganza, was found dead in her cell on Rikers Island. Although Candy is fictional and Polanco's death was under somewhat different circumstances, there's a thread that connects their experience as trans women of color — one that Sahar is all too aware of.

She says, "[Violence against the trans community is] still happening today. That's someone's child. And people are being murdered, countless numbers of bodies, being murdered, and most of them going unspoken for... most of them, hate crimes. And it has to stop, so I know that that's a story that we had to tap on."

Sahar continues, "And I also understand that it had to be a character that people loved because that's the only way people will feel remotely close to what it feels like. And that's just a character. Imagine what it feels like for a real person, losing their real child or sister or brother."

Candy's death left Lulu "on her own," but she's not alone since she reconnected with her House Abundance sister Blanca (Mj Rodriguez). After antagonizing Blanca in Season 1, Sahar is excited that audiences get a glimpse of her relationship with Rodriguez. "Mj is so dear to my heart in real life," she says. "That's really my real sister."

Blanca may have inspired her, but Lulu's now the one stepping up for herself and her family. "All the weight's on her and she's gonna pull through for her daughters," Sahar says. "You're going to see more of her real personality, not just the superficial glamour of things ... don't get me wrong, I'm definitely a glamour girl. But you're gonna see more of the human side of Lulu."

While Pose fans will have to wait to learn more about how Lulu runs her own house, they can find out more about Sahar right now in her Bustle Booth below.