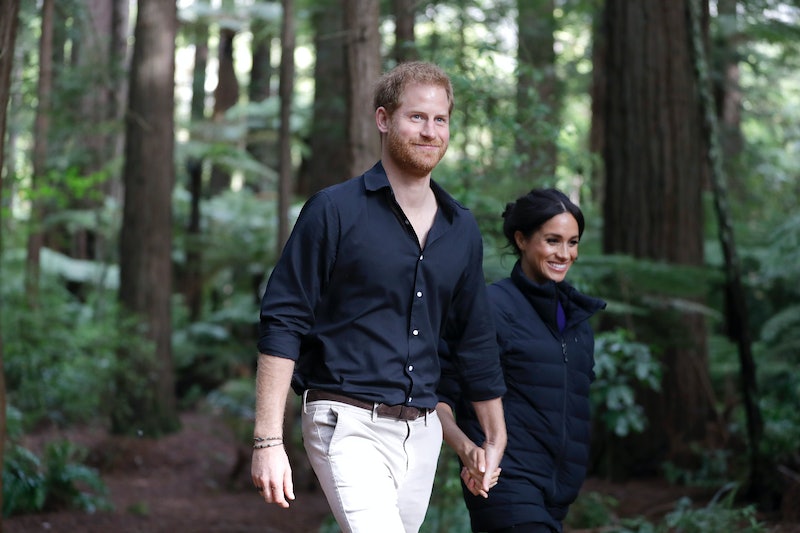 As soon as the pregnancy was announced, speculation as to what the new royal baby might be named was rife. Meghan and Harry are the millennials' royals after all, and since they don't mind breaking traditions, there's every chance they'll pick something a little unusual. I, for one, am really hoping they don't just opt for the usual suspect — your Williams, Edwards, Elizabeths, and so on. But there might be a more accurate way to predict, since Prince Harry and Meghan Markle named some baby chicks.

Hazza and Mazza have got up to quite a lot on their South Pacific tour. There was that time Maz got caught up in a lil security scare in Fiji, as well as all of those inspiring speeches. Then, they did a spot of whale watching, and the cuteness only continued, as they then named two chicks who had just hatched during their stop in New Zealand, Yahoo reports. The naming reportedly took place while they paid a visit to a breeding program for New Zealand's national (and quite possibly, cutest) bird — the kiwi. But did the chicks' names give any indication as to what the two might be calling their own nipper?

Well, if you consider "sneeze of life" a fitting name for a new royal, then yes, absolutely. The pair reportedly named one of the chicks 'Tihei', which means "sneeze of life" in the indigenous Te Reo Maori language, while the other chick got the slightly better end of the deal as they named it 'Koha', which means "gift". It may well be the most adorable way to have ended their seemingly endless South Pacific tour, as Haz and Maz visited the breeding program on their final day down under, Reuters reports.

As also reported, Harry impressed the crowds with his speech in Rotorua, as he delivered it in the traditional Te Reo language and ended it with a Maori proverb. It reportedly got a strong round of applause from the locals, who praised Harry for his strong pronunciation. Nice one, Haz.

According to the Shropshire Star, Meghan grimaced when one of the experts at the breeding programme revealed to her that laying a kiwi egg was the equivalent of having a "30lb baby". Hardly surprising because that does not sound pleasant at all. As New Zealand's Now To Love reported, the program's executive director, Michelle Impey said that although "There's a lot of preparation in hosting the royals," the global coverage they'll have brought to the cause will have made it "worth it".

I personally am feeling grateful for having these baby kiwis brought into my life. But best of all, I've now learned that kiwis have belly buttons, which is something the couple reportedly also got giddy about. "They also appeared delighted to see the kiwi's whiskers and nostrils," Now To Love writes. Whiskers AND nostrils?! Someone please hold me down from flying to New Zealand and bringing home Gift and Sneeze Of Life for myself.