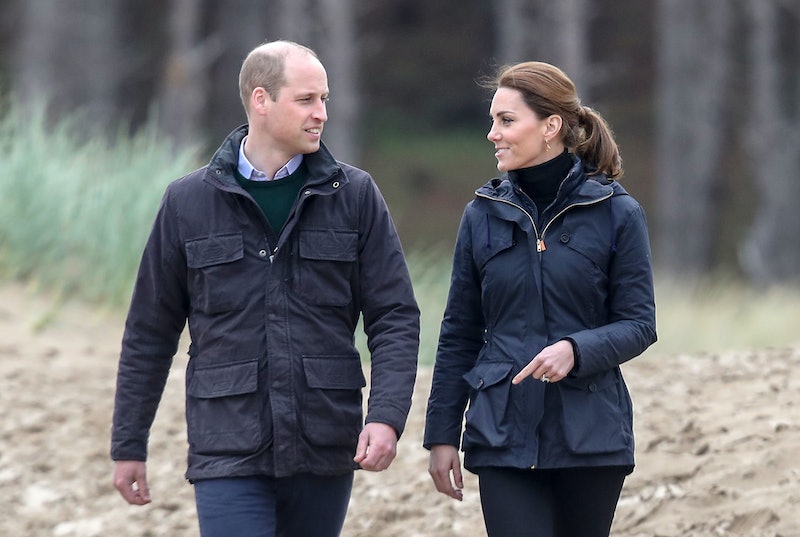 It's bound to be an autumn of adventure for the royal family. On the heels of Meghan Markle and Prince Harry's royal tour of South Africa announcement, it's been confirmed by Kensington Palace that Prince William and Kate Middleton will travel to Pakistan in the fall. People reported the news, which was announced via the couple's Instagram on Saturday, June 29.

"The Duke and Duchess of Cambridge will undertake an official visit to Pakistan this autumn, at the request of the Foreign and Commonwealth Office," the caption on Kate and William's official Instagram began. "Further details will be advised in due course." (We'll officially be using this fancy phrase from now on.)

The caption went on to reference Queen Elizabeth's visits to the South Asian country in 1961 and 1997. It also mentions that Prince Charles of Wales and Camilla, Duchess of Cornwall visited Pakistan in 2006. Photos from those visits were also included in the post. The second picture in the series shows the queen attending a State Banquet at the president's house in Karachi in 1961. Next, Queen Elizabeth can be seen meeting athletes on the Pakistan cricket team in 1997. Lastly, royal watchers can see Charles and Camilla at the Badshahi Mosque in Lahore, 2006.

Prince William and Kate's trip to Pakistan comes mere weeks after Prince Harry and Meghan Markle's South African trip was announced. It will be the couple's first major, overseas tour since the birth of their first son Archie Harrison in May. It's unclear whether William and Kate's three children — Prince George, 5, Princess Charlotte, 4, and Prince Louis, 1 — will be joining their mother and father on the international visit. Though, given Louis' sassy look at Trooping the Colour, his presence would no doubt lead to some amazing photo ops.

This will be the first visit to Pakistan for the Duke and Duchess of Cambridge, although People notes that they did make a trip to the neighboring nation of India in 2016. While details continue to emerge about Will and Kate's future fall trek, fans can analyze the journey to be had by The Sussexes. Three days ago, the couple confirmed the news via Instagram. The caption read, in part:

"The Foreign and Commonwealth Office have requested a visit to South Africa as well as The Duke carrying out visits to Malawi and Angola. His Royal Highness will also do a short working visit to Botswana on route to the other countries. The Duke and Duchess are really looking forward to meeting so many of you on the ground and continuing to raise awareness of the high impact work local communities are doing across the commonwealth and beyond. This will be their first official tour as a family!"

Previously, the royal family has consistently been on the move. Since marrying, Harry and Meghan have traveled to New Zealand, Australia, and Fiji, all while Meghan was expecting Archie.

While questions over specifics remain, fans can look forward to watching the fall trip from Kate and Will, as well as the one from Meghan and Harry, unfold. Knowing the royals, photos from their visits are bound to be iconic.

More like this
15 Photos Of 'The Last Of Us' Star Pedro Pascal That Cement His Zaddy Status
By Radhika Menon
Who Is Pete Davidson Dating? He & Chase Sui Wonders Got Caught Kissing
By Jake Viswanath
'Bachelorette' Vet Clare Crawley Unveiled 2 Special Wedding Day Accessories
By Stephanie Topacio Long
Cruz Beckham Teased New Music With An Adorable Nod To Mom Victoria Beckham
By Stephanie Topacio Long
Get Even More From Bustle — Sign Up For The Newsletter
From hair trends to relationship advice, our daily newsletter has everything you need to sound like a person who’s on TikTok, even if you aren’t.