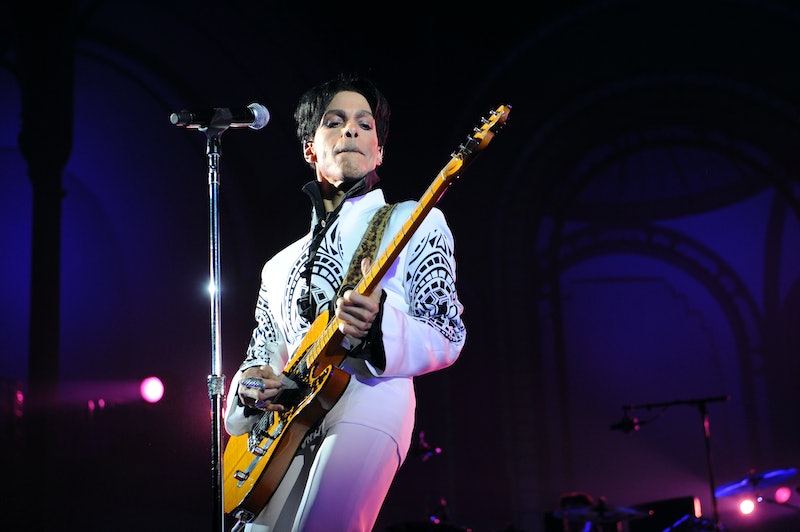 In a year when it already feels like everything has crossed over into the Bizzaro World, the news that Prince's favorite color might not have been purple shouldn't come as a shock, but it still totally does. Honestly, this is just one blow too many. The iconic musician is so closely associated with the color, it's hard not to think of Prince when you spot a purple shade. The Pantone Color Institute recently named a shade of the color Love Symbol #2 in Prince's honor. Surely, the man behind "Purple Rain" couldn't devote himself to any other hue, right? One of Prince's sisters, Tyka Nelson, seems pretty convinced that her brother was an orange devotee at heart.

With the My Name is Prince exhibition set to open this October in London, Tyka recently revealed to the Evening Standard why she's so happy Prince's orange Cloud guitar from his Super Bowl performance is being included in the exhibition. She told the paper,

"The stand out piece for me is his orange Cloud guitar. It is strange because people always associate the colour purple with Prince, but his favourite colour was actually orange."

And just like that, the internet's collective worldview collapsed a little bit more. People were shook, and understandably so. Yes, Prince wore a lot of orange during his concerts, but he also rocked some sweet purple duds, had a purple guitar, and wrote an anthem that made the royal hue even cooler than it already was. Orange is great and all, but it's not synonymous with Prince.

But wait, there's another plot twist coming. Prince's other sister, Sharon Nelson, issued a statement to the Associated Press on Thursday stating, "Contrary to what has been said, purple was and is Prince’s color." She went on to say her brother "was fond of many colors in the rainbow," but purple held a special place in his heart because it made him feel royal. Sharon's words should be comforting, but if anything, they've only left fans more confused than before.

Is it orange or purple? Sadly, there's no way to know for sure now that the legendary singer has passed away. Purple is his indisputable brand, but that doesn't mean Prince didn't have a fondness for orange as well. While it's a lovely color, orange doesn't exactly inspire classic rock anthems, so it would make since that he stuck with the more royal shade when he built his stage persona.

While the mystery of Prince's true favorite color is a lot to absorb, some fans are taking it in stride. It turns out when you've associated an artist with a color your entire life, there really is no going back.

The general consensus is that Prince will always be the Purple One, even if he may have been secretly devoted to orange. And who says you can’t have more than one favorite color? A person as creative as Prince was never going to adhere to societal conventions.

No matter what his favorite color was, Prince's true legacy is his unparalleled body of work and the lasting devotion of his fans. Whether he loved purple or orange or both, one thing everyone can agree on is that the world will always love Prince.