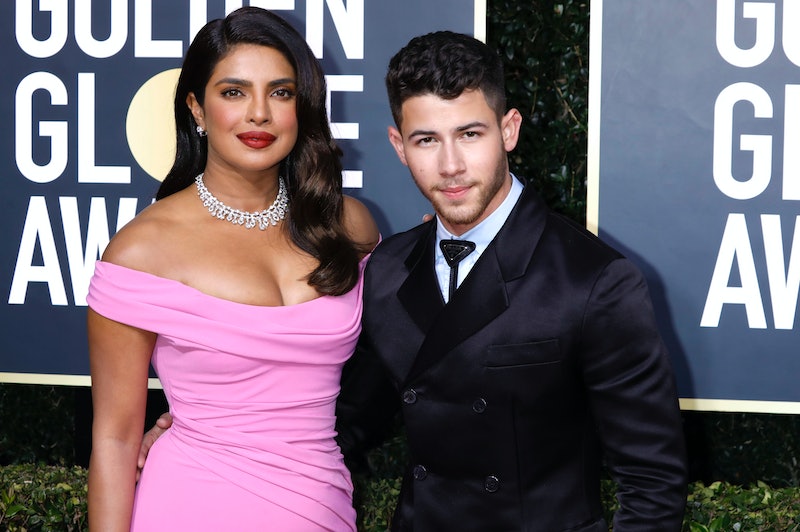 Two years before they became one of the hottest couples in Hollywood, Nick and Priyanka were just two friends enjoying a baseball game. On Monday, May 25, Nick Jonas and Priyanka Chopra celebrated the second anniversary of their first date by sharing throwback photos from the very early days of their romance on social media. The couple — who tied the knot in two elaborate, Indian ceremonies in December 2018 — were friends for about a year before they connected romantically during Memorial Day weekend in 2018.

"2 years ago today we took our very first picture together," Chopra wrote on Instagram, along with a selfie the pair took at a Los Angeles Dodgers game. "Every day since then you have brought me endless joy and happiness. I love you @nickjonas Thank you for making our life together so incredible. Here’s to many more date nights..."

On his own social media accounts, Jonas celebrated the milestone as well, with a photo from another one of the couple's dates. "This beautiful woman and I went on our first date two years ago today," Jonas wrote on Instagram, alongside a snap of him and Chopra posing in cowboy hats. "It has been the best two years of my life, and to think I am lucky enough to get to spend the rest of my life with her is such an incredible blessing. I love you babe. Happy two years."

While Chopra and Jonas celebrate May 2018 as the beginning of their romance, the Quantico star told Vogue that they actually connected over Twitter in September 2016, after a mutual friend encouraged Jonas to reach out. "I’m hearing from a few mutual friends that we should meet," Jonas' wrote in a DM. In response, Chopra asked the singer to text her instead, because "my team can read this."

They continued texting for months, but didn't meet in person until the Vanity Fair Oscar party in 2017. "And I put my drink down, get on one knee — this is in front of a bunch of people — and I say, 'You’re real. Where have you been all my life?' Like, loud," Jonas recalled of his first meeting with his now-wife. It was basically love at first sight for Jonas, who reportedly even told his mother that he would marry Chopra after just their third date.

Chopra also knew that she had found "the one" relatively early on in their relationship as well; in their December 2018 Vogue interview, she recalled feeling a shift when Jonas complimented her career during a date in L.A. "[He said,] 'I love the way you look at the world. I love the drive you have,'" Chopra recalled. "As a girl, I’ve never had a guy tell me, 'I like your ambition.' It’s always been the opposite."

Since their wedding, Chopra and Jonas have often cited their mutual admiration and support of each other's careers as the thing that makes their marriage work. "The thing that really connected both of us is our love for family and faith and the importance of being connected to those that are always going to be there for you," Jonas told The Today Show in 2018. Two years after their first date, it seems like that connection is stronger than ever for these two.

More like this
Priyanka Chopra & Nick Jonas’ Matching Tattoos Have A Romantic Meaning
By Radhika Menon
Priyanka Chopra Jonas Opens Up About “High Stakes” Birth Of Daughter Malti
By Radhika Menon
5 Wild Theories About Miley Cyrus’ “Flowers” Music Video
By Jake Viswanath
Keke Palmer Shares The Sex Of Her & Darius Jackson's Baby
By Jake Viswanath
Get Even More From Bustle — Sign Up For The Newsletter
From hair trends to relationship advice, our daily newsletter has everything you need to sound like a person who’s on TikTok, even if you aren’t.