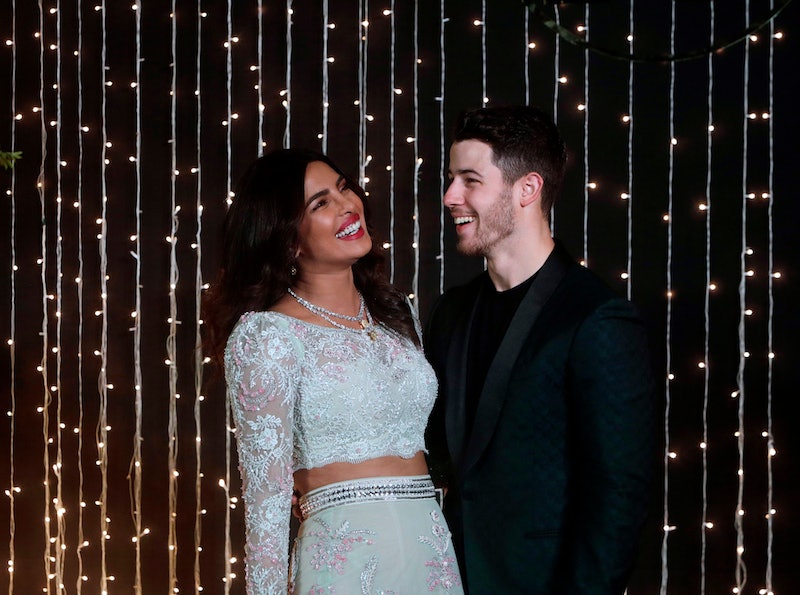 Priyanka Chopra and Nick Jonas are head over heels for each other now, but it wasn't always that way. During an appearance on The Ellen DeGeneres Show on Wednesday, Chopra admitted she wasn't a huge Jonas Brothers fan before she met her now-husband.

It sounds like she wasn't the only one who didn't know a ton about the other's past work either. Chopra explained to DeGeneres that she and Jonas "didn't know much about each other" at first, so they made a sort of game out of showing one another their older work, to learn more about their respective journeys to fame.

"Nick and I both didn't know much about each other, so we did a show-and-tell after we started dating where we showed each other our work from when we were younger — the embarrassing stuff, the horrible things" the actor told DeGeneres. "It was great. That's how we got to know each other's careers."

DeGeneres then asked Chopra how the two did meet, if it wasn't through mutual fandom. She recounted how Jonas DM-ed her on Twitter, writing, "I've heard we should connect." From there, she told him to just text her directly. And before fans knew it, Jonas and Chopra were Instagram official and attending family weddings together, before planning their own elaborate wedding celebrations.

As far as the wedding went, Chopra also talked to DeGeneres about how having 200 guests was actually on the small side for a traditional Indian wedding. But it sounds like they wanted to keep things relatively small to focus on the friends and family who were most important to them.

Based on the photos the two of them have shared on Instagram, it's clear how much they value having each other's families in their lives. Chopra recently shared a photo of her family in North Carolina. They were holding another wedding reception in the state, since it's where Kevin Jonas Sr. owns a Southern restaurant. The inclusion of both their families at the event shows how much they care about all of their relatives. Plus, Chopra's mom spent Christmas with the extended Jonas family, too.

Fandom has definitely worked for other celebrity couples, like Chris Pratt and Katherine Schwarzenegger, who said she was a Pratt fan in a 2017 interview. But there's something sweet about the fact that Chopra and Jonas didn't know a ton about each other before they were together. It underlines the fact that they were enticed by each other's personalities first and foremost, which is cute in its own way.

Jonas and Chopra are both mega-famous stars, but it sounds like that's not what drew them to each other. They really do seem like they're meant to be. And if the beginning of their relationship included some laughs about their past work, well, that's even more fun.