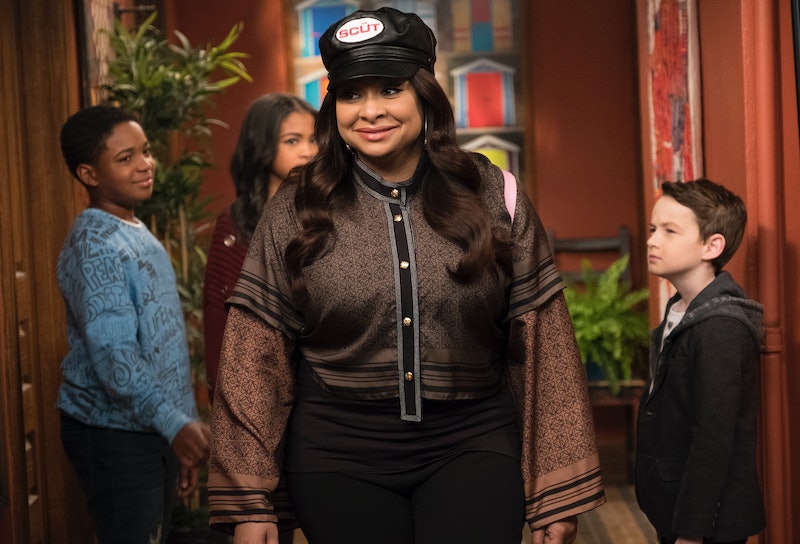 Things just keeping getting better for the Fab Five and their fans. Queer Eye's Karamo Brown is joining Raven's Home and he couldn't be more excited to make his TV acting debut on Raven-Symoné's Disney Channel series. Seriously, just check out his Instagram.

On Wednesday (June 5), Brown made his casting announcement with a photo of his Raven's Home Season 3 script on Instagram. "Who me... just over here getting my ‘Denzel’ on! Lol," Brown captioned the shot. "So excited to share I got cast on @ravenshomeofficial. More details to come but beyond thrilled to be acting alongside this Uber talented cast!"

The post was in honor of his first day on set ("Wish me luck!" he wrote to his followers) and clearly, the Queer Eye culture expert wasn't looking to get fired. He made sure to blur out the most important details of the episode that are typed on the front page of his script. This includes pertinent information like who wrote the episode and where it falls in the new season, which premieres June 17. But, his photo did reveal that Raven-Symoné will direct the episode.

While Brown promised to share more details about his Season 3 role soon, right now, it's unclear if this is a one time cameo or a recurring role on the the series, which is a That's So Raven spinoff. On the new show, the all grown-up Raven Baxter still has her psychic abilities, but now she's a single mom of tween twins Nia (Navia Robinson) and Booker (Issac Ryan Brown), the latter of whom seems to have inherited his mom's gift. With help from her bestie Chelsea (Anneliese van der Pol), Raven is trying to help her kids get through middle school.

Whoever Brown's playing on Raven's Home, it's clear his Queer Eye cast mates are excited for him. Both Antoni Porowski and Tan France congratulated Brown on Instagram. "This is so cool, congrats angel!!" France wrote. "You won’t need any luck you’re truly amazing."

Of course, this isn't the first time a Queer Eye guy has made the jump from reality TV to scripted. Last year, France made a cameo on Crazy Ex-Girlfriend. "YOU GUYS! Yesterday, I did something I would have never dreamt possible," he wrote back in August. "I filmed a scripted scene!"

Even when they're not filming Queer Eye, these guys keep themselves busy. Jonathan Van Ness just designed an eyewear line for Pride that was named in honor of his favorite ice skater Michelle Kwan. Porowski opened a new restaurant in New York City. And Brown just wrote a memoir that revealed the time Van Ness tried to wax his ears. No surprise, it didn't go well.

Don't worry, though, these guys aren't too busy to help other people discover their best selves, ear hair and all. Queer Eye is returning for Season 4 with new heroes that Bobby Berk hopes will be even more inclusive. Not to mention, Queer Eye: We're In Japan!, a four-episode mini-series that the Fab Five filmed abroad earlier this year, is also set to premiere sometime soon. Hopefully, all this won't interfere with Karamo's busy acting schedule.

More like this
The First Trailer For 'That '90s Show' Includes So Many Nods To The Original Series
By Jack Irvin, Alyssa Lapid and Grace Wehniainen
The 'Kenan & Kel' Reunion On 'SNL' Took A Dramatic Turn, Thanks To Keke Palmer
By Brad Witter
'Bridgerton' S3 Teases Exciting Social Season For Penelope Featherington
By Bustle
The ‘Emily In Paris’ Season 3 Trailer Teases Major Career & Love Crossroads For Emily
By Bustle Staff
Get Even More From Bustle — Sign Up For The Newsletter