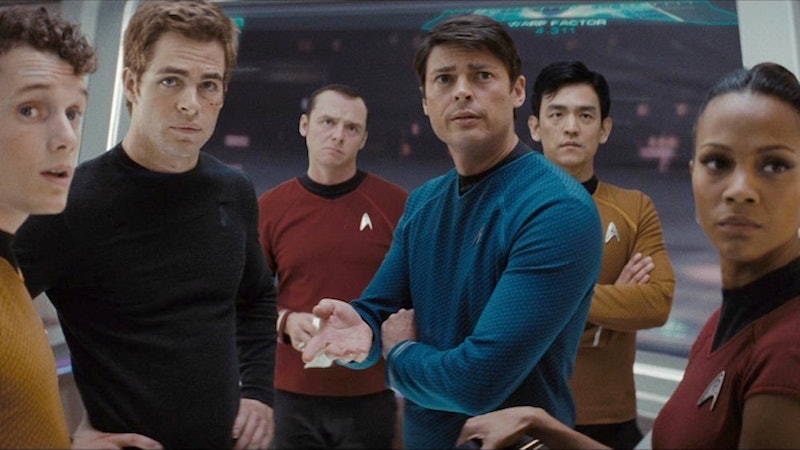 Ever wonder what they call a quarter pounder with cheese in space? Well, Star Trek fans might soon get an answer to that very question. Quentin Tarantino's Star Trek movie will be "Pulp Fiction in space," according to the director, which means yes, Star Trek 4 is going to be R-rated. But, hopefully, also means it'll feature a dance number with Chris Pine's Captain Kirk.

In a new interview with Deadline, Tarantino admitted that he's looking to bring his own style to the Star Trek franchise, and he told producer J.J. Abrams as much when he pitched him the project. So yes, if Tarantino does direct this movie (the official details aren't done just yet), this is going to be a Star Trek movie with a Tarantino twist — something he is very adamant about. In this interview, he even went so far as to call out Simon Pegg, who plays Montgomery Scott in this new Star Trek movie franchise, for saying this film, with a script written by The Revenant‘s Mark L. Smith, isn't going to be "Pulp Fiction in space."

"Yes, it is!" Tarantino told Deadline, laughing. "If I do it, that’s exactly what it’ll be. It’ll be Pulp Fiction in space. That Pulp Fiction-y aspect, when I read the script, I felt, I have never read a science fiction movie that has this sh*t in it, ever. There’s no science fiction movie that has this in it." In fact, that's why Abrams wanted to make it because "it’s, at the very least, unique in that regard," Tarantino said. He added, "There is a gangster element to what we’re doing with the Star Trek thing that works out pretty good."

The director, whose new film Once Upon A Time In Hollywood hits theaters July 26, is a big Star Trek fan, and he told Deadline it's all because of the original Captain Kirk, William Shatner. "I think it’s one of the greatest performances in the history of episodic television, of a series lead, and rightly so," he says, "because very few series leads have ever gotten the opportunity to play all the different wild, crazy things."

This is also why he likes Pine's portrayal of Captain Kirk in the films. "He’s playing the William Shatner version of Kirk and he’s doing a fantastic job at it," Tarantino said. "I mean perfect, frankly. And [Zachary] Quinto is perfect as Spock. Those two guys, they f*cking got it." And in this upcoming movie, those character may even get to drop a few F-bombs themselves.

Speaking of changing the rating of the franchise, Tarantino said Abrams was down with making an R-rated Star Trek because that's just what he does. "I just don’t think it’s that big of a deal but if I’m going to do it, then I’m going to do it my way," he said.

It might also be the last movie Tarantino ever makes. For years, the director has said he was going to stop directing after 10 films and that's what Star Trek would be, if he directs it. "I think when it comes to theatrical movies, I’ve come to the end of the road," Tarantino recently told GQ Australia. "I see myself writing film books and starting to write theatre, so I’ll still be creative. I just think I’ve given all I have to give to movies.”

So, for his possible last film, Tarantino is going to infinity and beyond, and it's likely his fan will be more than happy to follow him there.

More like this
Anne Hathaway Shared A "Thrilling" 'Princess Diaries 3' Update
By Darshita Goyal
'The Queen’s Gambit' Season 2 Tweet Wasn’t From Anya Taylor-Joy
By Mary Kate McGrath, Jack Irvin and Grace Wehniainen
Netflix Shut Down 'Bridgerton' S3 Rumours About A “Very Dark” Storyline
By Bustle
'Friends' Star Maggie Wheeler Offers Support To Matthew Perry After Reading His Memoir
By Alyssa Lapid
Get Even More From Bustle — Sign Up For The Newsletter
From hair trends to relationship advice, our daily newsletter has everything you need to sound like a person who’s on TikTok, even if you aren’t.