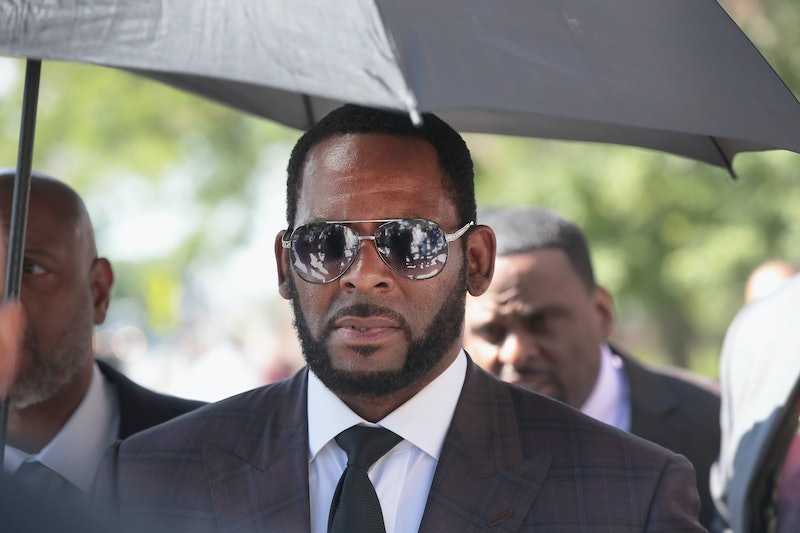 Following years of sexual abuse allegations and prior arrests, NBC New York reported on Friday, July 12 that R. Kelly was arrested on federal sex charges on Thursday night. The arrest took place in Chicago, and the singer is reportedly facing a federal grand jury indictment of 13 counts.

Kelly's attorney Steve Greenberg released a statement on Twitter, confirming the arrest, and stating that a bail hearing has been set for next week. "He and his lawyers look forward to his day in court, to the truth coming out and to his vindication from what has been an unprecedented assault by others or their own personal gain," Greenberg wrote in his statement, shared early July 12. "Most importantly he looks forward to being able to continue to making wonderful music and perform for his legions of fans that believe in him."

CNN also reported that a source from the U.S. Attorney's Office from the Eastern District of New York claimed that an additional five-count indictment against Kelly will be released on Friday. This source confirmed that an appearance by Kelly in federal court in Brooklyn is forthcoming. The publication reported that the New York Police Department and Homeland Security were involved in Kelly's Chicago arrest. The Eastern District of New York confirmed to Bustle that the office would be issuing a press release later in the day.

Kelly has already faced the court system in Chicago multiple times in 2019. He was charged with 10 counts of aggravated criminal sexual abuse in February following the release of the Lifetime docuseries Surviving R. Kelly the month prior. CNN reported that these charges involved four women, three of whom had been minors when the alleged abuse occurred between the years of 1998 to 2010. Bond was set at $1 million. Kelly pleaded not guilty and was released on bail.

Kelly was jailed in Illinois again when he was arrested for not paying child support in early March, but was released a few days later. By the end of May, 11 more sexual abuse charges were filed against Kelly again by the Cook County State Attorney's office. But these recent federal charges are giving people hope that Kelly will be convicted this time around with Surviving R. Kelly executive producer dream hampton tweeting, "This is the one. It's a wrap. Finally."

Long before Lifetime released the series that documented the experiences of some of the women who claim to have been abused by Kelly, the singer had been accused of sexual abuse. In the early 2000s, he was charged with multiple counts of child pornography, but he was acquitted of all charges in 2008. He also reportedly married fellow singer Aaliyah in 1994 when she was just 15 years old — he was 27 at the time.

Throughout it all, Kelly has maintained his innocence. "Mr. Kelly has declared his innocence from day one," Kelly's representative Darrell Johnson told NBC New York after Thursday's indictment. "I've seen nothing, and I do mean nothing, that would lead to any type of guilt."

The New York Times reported that Kelly is scheduled for an arraignment in federal court in Chicago on Friday. The publication also confirmed that Kelly will be brought to New York for additional charges at a later time.

More like this
Austin Butler Recalls Lisa Marie Presley Showing Him Elvis’ Bedroom
By Jake Viswanath
The Jonas Brothers' New Album Has A Very Meta Name
By Alyssa Lapid
Jameela Jamil Defends Sam Smith After Trolls Body-Shamed Them
By Jake Viswanath
Katy Perry Regrets Not Working With Billie Eilish On “Ocean Eyes”
By Alyssa Lapid
Get Even More From Bustle — Sign Up For The Newsletter
From hair trends to relationship advice, our daily newsletter has everything you need to sound like a person who’s on TikTok, even if you aren’t.