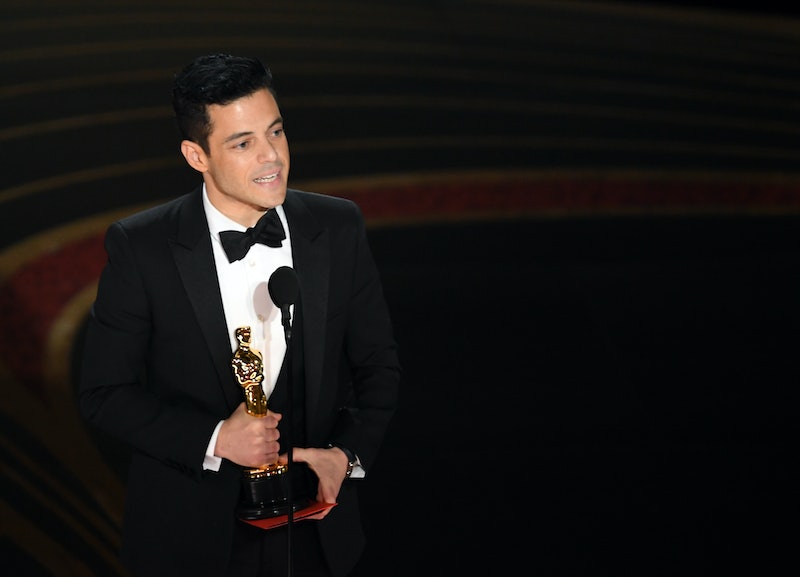 He might not have really been in Queen, but he's officially Hollywood royalty now. Rami Malek won Best Actor at the 2019 Oscars and used his powerful acceptance speech to honor his parents, who immigrated from Egypt. The actor began his speech by shouting out his mother, who was in attendance alongside Malek's brother, Sami. "I love you, lady," he gushed.

Later in his speech, Malek reflected on what he would tell his younger self about what life had in store for him, saying, "That kid was struggling with his identity ... I think to anyone struggling... we made a film about a gay man, an immigrant, who lived his life just unapologetically himself. The fact that I'm celebrating him and this story with you tonight is proof that we're longing for stories like this."

Connecting his journey to his parents', Malek continued, "I am the son of immigrants from Egypt. I am a first generation American, and part of my story is being written right now and I could not be more grateful." Wrapping up his speech, Malek's voice cracked as he noted that "this moment is something that I will treasure for the rest of my life."

In addition to praising his mother, Malek used his acceptance speech to honor another important woman in his life: girlfriend and Bohemian Rhapsody costar Lucy Boynton. "You are the heart of this film, you are beyond immensely talented and you have captured my heart," he said, while a tearful Boynton looked on.

One person who was not mentioned in Malek's speech, however, was Bryan Singer, who is the credited director for Bohemian Rhapsody. In the middle of filming, Singer left the biopic, and the film was completed by Dexter Fletcher, though his name remains attached. Singer has been accused of sexual misconduct with minors, which has cast a shadow over Bohemian Rhapsody's award season. (In a statement to Bustle, a representative for Singer categorically denied the allegations.)

While Malek didn't address the accusations against Singer on Oscar night, he has previously commented on the situation, telling the Los Angeles Times back in January that, "As far as I knew, I was considered before Bryan was even attached. So I had my head down preparing for this for about a year ahead of time, and I never really looked up."

The actor also added that he was "unaware" of the allegations of sexual misconduct against the director, saying, "I didn’t know much about Bryan. I think that the allegations and things were, believe it or not, honestly something I was not aware of, and that is what it is. Who knows what happens with that … but I think somehow we found a way to persevere through everything that was thrown our way."

Earlier this month, Malek opened up about what he called an "unpleasant" experience working with Singer, telling The Guardian that, "For anyone who is seeking any solace in all of this. Bryan Singer was fired. Bryan Singer was fired – I don't think that was something anyone saw coming but I think that had to happen and it did." He also added, "my situation with Bryan, it was not pleasant, not at all. And that’s about what I can say about it at this point."

It's hard to blame Malek for not wanting to dwell on the negative experiences that he had while making Bohemian Rhapsody, especially during such an exciting moment in his career. And even though the film has earned a bit of backlash for Singer's attachment, Malek's Best Actor victory is still something to be celebrated, especially for the immigrant community in America.