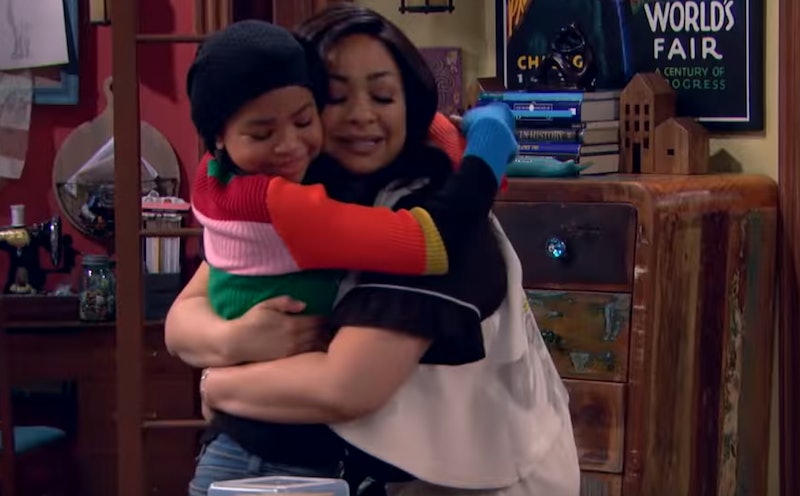 Not all high school romances have a fairy tale ending, and Disney's That's So Raven spinoff Raven's Home is set to explore what happens when your first love story doesn't go as planned. In an interview with MTV, actor Raven-Symoné reveals that although Raven and Devon are no longer together, the couple have a mature co-parenting relationship. The last time fans saw these two together, they were teenagers who were making a long-distance relationship work, but in the Raven's Home premiere, they will be reintroduced as the divorced parents of twins, Booker and Nia. It's a departure from the nuclear family situation portrayed on another Disney Channel followup of a beloved show, Girl Meets World, and it's an important one for Raven's Home to make.

Although the national divorce rate is declining, according to a National Heath Statistics Report, it's still important for children to see different types of families presented on their screens. In the case of Raven's Home, Raven and her childhood best friend, Chelsea, will be raising their children together in one home. That doesn't mean Devon will be absent from his children's lives though. In fact, Booker and Nia's father will be a present role model and parent, who will have a positive relationship with his ex-wife.

The twins and Raven are adjusting to a new home life, but it's one that Devon will still be a huge part of.

Showing young children that even though divorce is scary, it doesn't mean your parents won't be there for you, is an important message. It's also going to be nice for some kids to see their family dynamic reflected on TV — especially since many shows aimed at younger demographics still primarily feature two-parent homes.

As for the adult fans who will be tuning in to see Raven as an adult, it might be a little heartbreaking to realize one of your favorite TV couples is no longer together, but their new reality will make the show so much more interesting. The truth is, not everyone can be Cory and Topanga. Devon and Raven's relationship path is realistic, and seeing how they handle being single parents will add a fun dynamic to the series. It sounds like these two have matured in a big way, even though they sound like they'll still be kids at heart themselves.

While it would have been nice for Devon and Raven to have a traditional happy ending, it's important for series aimed at kids to show audiences there's more than one way to live happily ever after.