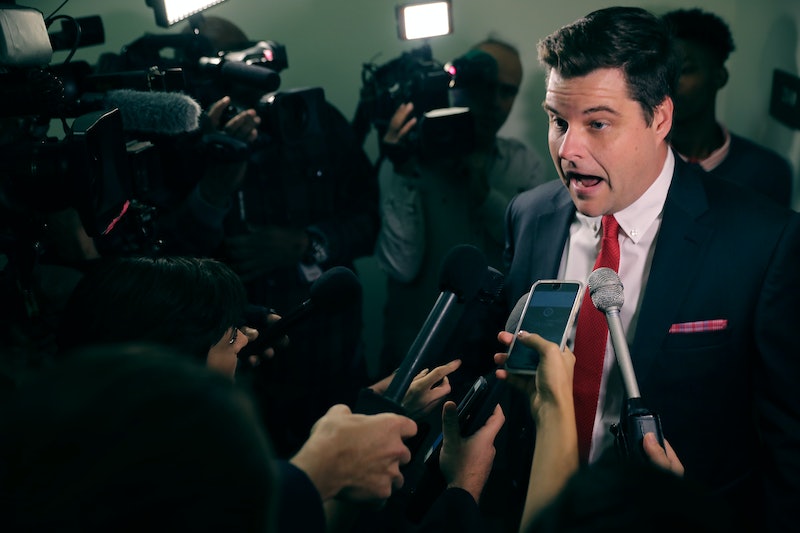 A Republican congressman from Florida has expressed his opposition to protecting LGBTQ rights before, and his views have only gotten more confusing. At a Tuesday hearing on the Equality Act, Rep. Matt Gaetz argued against transgender rights and raised eyebrows all over the place.

"I strongly support the rights of transgender individuals," Gaetz said during the hearing. "I will not denigrate or deny their existence or their struggles, but I am concerned about the potential of bad actors who would exploit the provisions of this law for their own gain."

He was referring to the Equality Act, which would ban discrimination against LGBTQ people across the country. The congressman continued to argue against implementing the law and revealed a deep misunderstanding of what it means to be transgender.

"Consider this possibility — if President Trump were to say, I am now the first female president? Who would celebrate that?" Gaetz said. "Would those who support the legislation think that's a good thing, or would they be dismayed? Bad actors have already weaponized some ostensible equality laws for their own benefit."

Gaetz's apparently thinks the Equality Act would open the door for people who are not transgender to declare themselves transgender for personal gain. What, exactly, he thinks they would gain aside from human rights remains to be seen.

Gaetz has already taken several opportunities to express his opposition to transgender rights. When Trump tweeted out a ban on transgender troops serving in the military, Gaetz responded by tweeting, "This was the right thing to do!" And before Trump declared his national emergency over the situation at the border, Gaetz said that he wasn't entirely supportive of this aggressive use of presidential power — and his rationale had to do with transgender rights.

“I don’t want the next national emergency to be that some Democrat president says we have to build transgender bathrooms in every elementary school in America,” he told The Wall Street Journal.

Gaetz's views on LGBTQ rights are all the more baffling because he acknowledges that being gay or transgender isn't a choice.

“I’m on the pro-science side of the Republican Party,” Gaetz told The New York Times last month. “I mean, like, marijuana can help people live better lives as medicine, the earth is warming and nobody chooses to be gay.”

Gaetz believes that "transgender people exist," as he said in the Equality Act hearing, and that people don't choose to be transgender. He doesn't believe that their equal rights should be enshrined in the law, though, because of the possibility that someone — like Trump — could pretend to be transgender for some sort of personal gain.

Regardless of how he justifies the position, Gaetz's views on transgender rights align him squarely with the Trump administration. In addition to the military ban — which the Supreme Court recently allowed to go into effect — the administration effectively defined transgender and non-binary identities out of existence with an October 2018 memo. Proponents of the Equality Act believe this makes the proposed law more important than ever — with or without Gaetz's support.