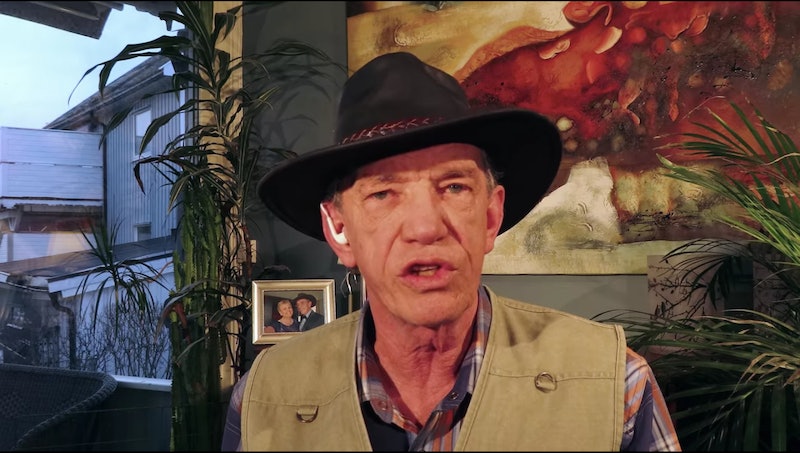 Just a few weeks after the hit docuseries premiered, Netflix dropped an after-show episode of Tiger King, and it's full of new revelations about the series' eccentric characters. During the episode, Rick Kirkham said Joe Exotic is terrified of big cats, and claimed the series didn't go far enough to show how the convicted felon fooled the public.

Kirkham, a journalist and producer who lived on the tiger reserve, told Joel McHale, who hosted the special episode, about some of the alleged deception that occurred on the tiger trader's Oklahoma reserve. "The one thing that wasn't pointed out in the docuseries that's really important to know is that Joe was terrified of big cats," Kirkham said. "He was scared to death of lions and tigers."

The former-producer went on to claim that in the pictures used to promote the show, where Joe Exotic poses with two tigers, neither cat posed a danger to the star. "In the shots you see in there, the white one is blind, and the other one is on tranquilizers," he said. Kirkham added that the title of the show isn't exactly fitting. "It's idiotic to think how he's become famous as the 'Tiger King' when he's so afraid of big cats," he told McHale

Joe Exotic, whose real name is Joseph Maldonado-Passage, was convicted of hiring someone to murder Big Cat Rescue founder Carole Baskin, and is currently serving 22 years in prison. Kirkham filmed on Joe Exotic's Oklahoma reserve for years before the footage burned in a fire. The Tiger King and I revealed several new and disturbing claims from Kirkham, who further outlined the extent of Joe Exotic's animal abuse and alleged that the eccentric once asked him to kill Baskin, "as a joke."

McHale asked the former journalist if he had any regrets about his role in G.W. Zoo. "I regret ever meeting Joe Exotic," he said. "I went in because I saw there was an opportunity for a wonderful show about big animals." He continued that the experience was ultimately traumatic, noting, "I still have nightmares. Since this docuseries, I’ve had more nightmares about having lived on that park.”

Tiger King, which became a ratings sensation for Netflix, details the unbelievable tale of Joe Exotic and his rivalry with Baskin. For fans, it's no surprise that the after-show interviews brought even more dramatic revelations about the eccentric personalities from the series to light.