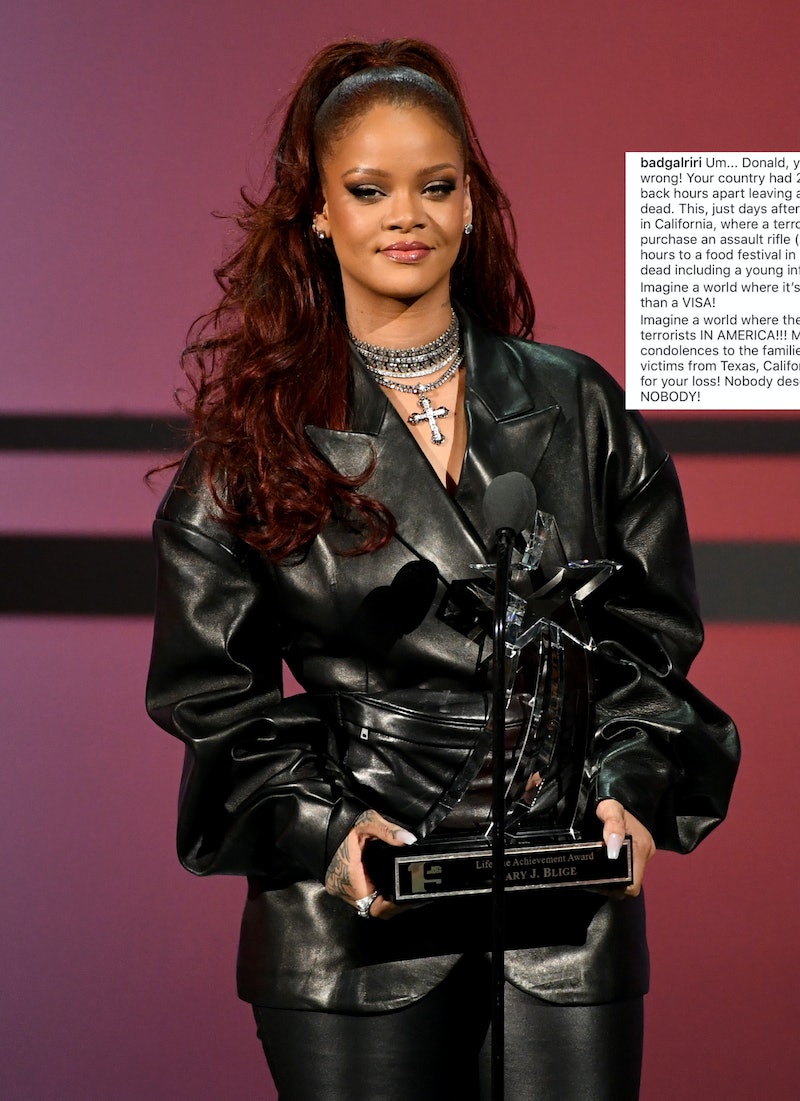 As the world is still reeling from this weekend's mass shootings in Ohio and Texas, one celebrity is taking a strong stand against the President. On Sunday night, Rihanna responded to Donald Trump's tweet about the shootings in a post on Instagram, taking the opportunity to call for gun control, as many others have done in the wake of these attacks.

As The New York Times reported, on Saturday, Aug. 3, a gunman's attack on an El Paso Walmart store left 20 people dead and 26 injured. Less than 24 hours later, another shooting in Dayton left 10 people dead, including the shooter, and 27 injured. Following the shooting in El Paso, Trump tweeted:

Today’s shooting in El Paso, Texas, was not only tragic, it was an act of cowardice. I know that I stand with everyone in this Country to condemn today’s hateful act. There are no reasons or excuses that will ever justify killing innocent people.... Melania and I send our heartfelt thoughts and prayers to the great people of Texas.

But many people weren't satisfied with his response to the attacks. In the hours and days following the shootings, Twitter was flooded with people demanding stricter gun laws to help prevent shootings like these from happening in the future, rather than simply offering "thoughts and prayers." And many people read the President's tweets as lacking in the face of these demands for change.

Rihanna reposted Trump's tweet on Instagram, sharing her thoughts with her followers. The singer made clear that she sees these shootings as "terrorism," noting, "Um... Donald, you spelt 'terrorism' wrong! Your country had 2 terrorist attacks back to back, hours apart leaving almost 30 innocent people dead." She then referenced the Gilroy Garlic Festival shooting, which left four people dead, including the gunman, on July 28. She wrote,

This, just days after yet another terrorist attack in California, where a terrorist was able to LEGALLY purchase an assault rifle (AK-47) in Vegas, then drive hours to a food festival in Cali leaving 6 more people dead including a young infant baby boy!

Rihanna then went on to comment about American gun laws, noting how easy it is to get a gun in America, and extended her condolences to the people who have been affected by these attacks. She continued:

Imagine a world where it’s easier to get an AK-47 than a VISA! Imagine a world where they build a wall to keep terrorists IN AMERICA!!! My prayers and deepest condolences to the families and loved ones of all the victims and the communities affected and traumatized, from Texas, California, and Ohio! I’m so sorry for your loss! Nobody deserves to die like this! NOBODY!

This isn't the first time that Rihanna has called out Trump publicly. In November, she tweeted about Trump using her music at his "tragic rallies" and served him a cease-and-desist letter days later asking him to stop.

The Dayton shooting marked the 251st mass shooting of 2019, according to the nonprofit Gun Violence Archive, as reported by CBS News. Hopefully, people like Rihanna speaking out can only help to bring the change necessary to ensure that mass shootings become few and far between.

More like this
Rihanna Skipped The Met Gala For Good Reason — But She Still Stole The Show
By Alyssa Lapid
Rihanna Wore Crochet Bra Tops In A$AP Rocky's New Music Video
By Dominique Norman and Kelsey Stiegman
Playing A Scrub Nurse On 'Grey’s Anatomy' Made BokHee An Instagram Royalty
By Brad Witter
Celebrities & President Biden Are Enraged By The Leaked Roe v. Wade Decision
By Alyssa Lapid
Get Even More From Bustle — Sign Up For The Newsletter