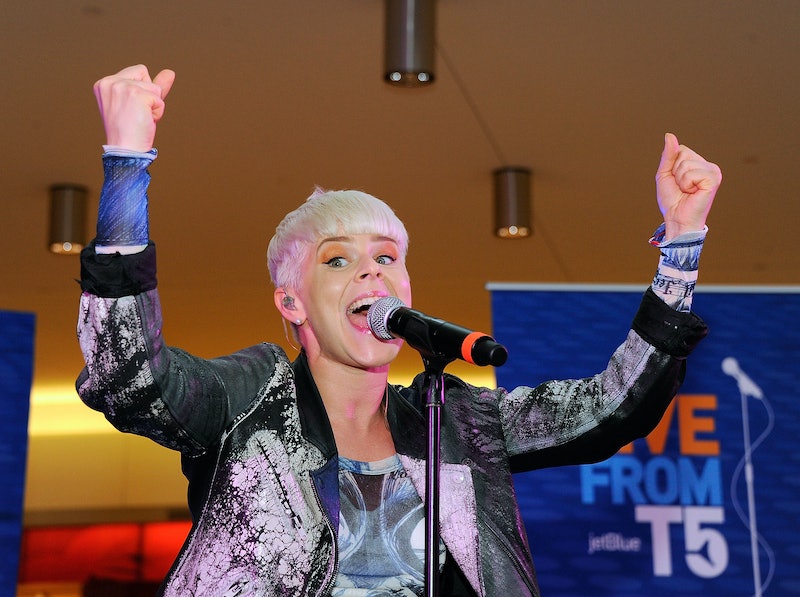 Even after Robyn's concert in New York ended on March 8, the party seemed to be just beginning. Robyn responded to the viral clip of fans singing her song on a subway platform after her show at Madison Square Garden, and it's guaranteed to make anyone who wasn't lucky enough to be there feel plenty of FOMO.

The Swedish EDM artist performed a sold-out show on Friday as part of her highly-anticipated Honey tour, and even though fans got to sing and dance along to their favorite songs during the concert, they didn't seem to have enough of Robyn. After the show, several Twitter users began posting videos of the crowd of fans waiting on the subway platform at Penn Station, belting out "Dancing On My Own" and dancing along to the fan-favorite track.

Shortly after the video clips went viral, the singer herself responded to the impromptu dance party on Instagram, where she wrote that she was "overwhelmed" by the love and joy that was shown in the clip. "Someone just posted this video and I can’t believe the love in this subway station," Robyn wrote, alongside a video of the causal after-concert party. "Thank you New York ♥"

The fans' excitement is the result of more than just not wanting that post-concert feeling to fade; Robyn released Honey, her first album in eight years back in October, after all but disappearing from the spotlight in the wake of the massive success of Body Talk. After teasing the album's title track at the end of an episode of Girls in March 2017, the singer released her first new track in almost a decade when she dropped the dance breakup anthem, "Missing U" in August.

Though she took a break from releasing music and performing for some time, Robyn has made her love for her fans a major part of her comeback, even releasing a short film along with "Missing U" that showed her listening to voicemails from her fans and making a surprise appearance at a Robyn-themed dance party. "I've got really, really good people who love my music," the singer said in the film.

"I haven't made an album in eight years, so I haven't seen my fans for a long time, either," Robyn continued, before explaining why she needed to stop making music for a while. "I felt like I really had to do some exploration to figure out what I wanted to write about again. I learned new things about myself."

And, she noted, there was a double meaning behind the title of her comeback single, saying in the film that "'Missing U' is a song about this trippy thing that happens when people disappear. It's like they become more clear and you see them everywhere. And it's also a little bit of a message to my fans, that I've missed them. So, I think connecting back to them is important."

In addition to talking about how much it means that her fans are still dedicated to her music after all this time, Robyn has also been open about how the process of writing Honey helped enhance her healing process after a difficult eight years that involved "intensive" therapy, a painful breakup, and the death of a close friend.

"You just become way lighter and, in a way, stronger,” Robyn told The Cut in a November interview about the process of making her sixth album. "I would say that’s the other way of saying strong, maybe — it makes you free. ‘Strong’ is the word. It’s nice to use the word strong … A self-generated energy that I could tap into on my own terms and whenever I wanted, which was a totally new thing for me."

Based on the exuberant dance party that took place after her show on Friday night, it's clear that Robyn isn't the only person who feels much freer after listening to her music.