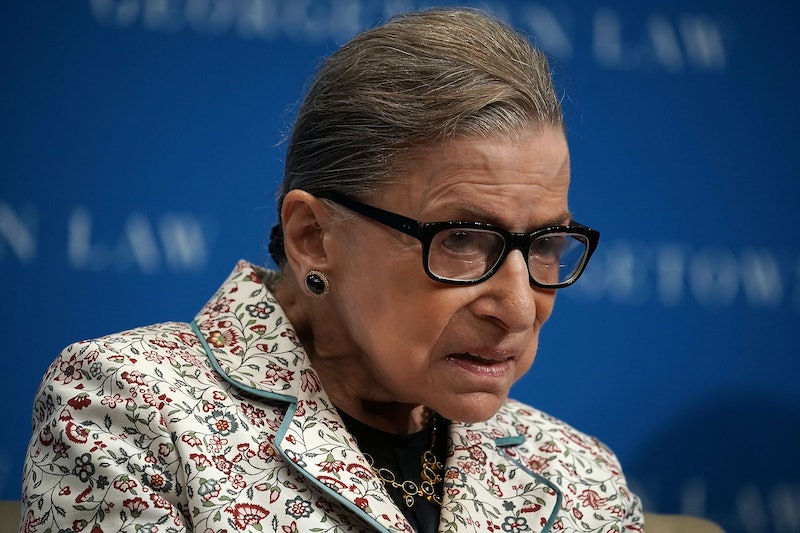 The most "notorious" Supreme Court justice is on the mend following treatment for lung cancer. Ruth Bader Ginsburg left the hospital on Tuesday and is now recovering at home, a Supreme Court spokesperson, Kathy Arberg, told reporters in an email, according to CNN.

On Friday, Ginsburg underwent surgery at Memorial Sloan Kettering Cancer Center in New York City to remove two cancerous growths on her left lung. The malignant nodules were discovered when Ginsburg was hospitalized last month after falling in her office and fracturing three ribs. The surgery was an apparent success, as Arberg said "there was no evidence of any remaining disease” following treatment, according to The New York Times.

The hardy justice had been working throughout her most recent hospital stay. Shortly before undergoing surgery, she reportedly cast the deciding vote that blocked the Trump administration from enforcing a policy that would bar immigrants who entered the United States outside the official border crossings from seeking asylum.

Votes like that have earned the liberal justice a loyal following, and her supporters, who fondly refer to her as the "Notorious RBG," offered up their own lungs to Ginsburg when news of her cancer surgery broke. During her previous hospitalization, they were offering up their own ribs.

But Ginsburg's long history of powering through illness and injury should calm her supporters' nerves. The 85-year-old had two previous experiences with colorectal and pancreatic cancer, in 1999 and 2009, respectively. Dr. Raja Flores, Mount Sinai Health System's Chair of Thoracic Surgery, previously told Bustle that the nodules found on Ginberg's lungs could have been linked to these past bouts with cancer.

Ginsburg also fractured a couple ribs six years before her recent fall, in 2012, and had a stent implanted in her heart in 2014. The justice maintained her work schedule through all of that. In a 2013 interview with The New York Times, she said she would remain on the court "as long as I can do the job full steam," while acknowledging that health is a concern at her age.

But despite her years, Ginsburg is committed to a workout routine that would leave most younger people gasping for breath and reaching for an ice pack — so committed that she once left a dinner with former President Barack Obama at the White House to hit the gym, according to her trainer. Ginsburg started working with personal trainer Bryant Johnson after she finished treatment for colorectal cancer, and she now runs through her challenging exercises twice a week, according to NBC News. Her routine involves enough planks and push-ups to make late-night host Stephen Colbert cramp up. If you want to see how your fitness level stacks up against Ginsburg's, you can try it out for yourself with Johnson's book, "The RBG Workout: How She Stays Strong… and You Can Too!"

While it's unclear when Ginsburg will be given the green light to return to the gym, there's no doubt she'll continue to chip away at her workload while she recovers at home. Justices will return for official business on Jan. 4, according to CNN, and the Supreme Court is due back in session on Jan. 7.