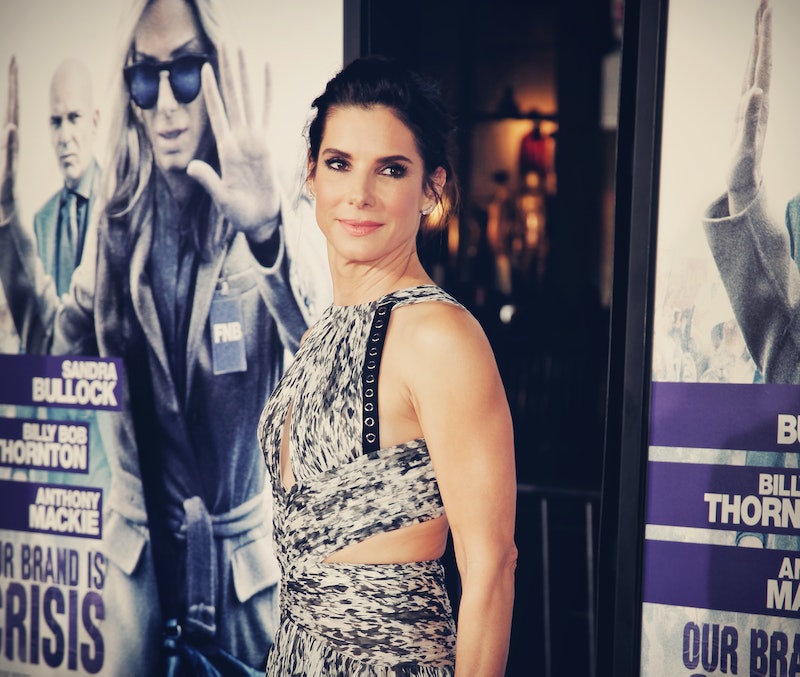 Internet trolls readying themselves to attack Ocean's 8 just for existing might want to rethink their strategy. Sandra Bullock is warning haters that the cast of Ocean's 8 is ready to fight back, and fight back hard. The all-female spinoff of the Ocean's 11 franchise hits theaters in Summer 2018, and while fans are yet to uncover so much as a teaser trailer for the film, the Internet is already rumbling. While it might seem a little "doomsday prepper" of Bullock to say so, it's the unsettling, rage-filled response to the 2016 reboot of Ghostbusters with all women that has everyone on edge. Why ignore the trolls, when the other option is band together to fight them off?

With so little information to go on, the Ocean's 8 trolls have miraculously stayed quiet thus far. Even so, Bullock and the crew are prepared. As the actor told Entertainment Weekly, "I’ll tell you, we’ve got some feisty women that will fight right back,” against any misogynist, racist backlash against the film. Bullock continued, "There should be a rule, you’re not allowed to say anything nasty until after it comes out. Obviously that’s never going to happen.” Maybe not, but it's invigorating to hear the Ocean's 8 gang are readying themselves to kick some troll butt just the same.

When writer-director Paul Feig announced he was rebooting Ghostbusters, the worst parts of the Internet chose to riot. Even though the 1984 film had a sequel, an animated spinoff, and an unmade third film, the concept of remaking the original with women in the lead roles was suddenly too much for the film's devotees. Not all of them, of course — just the worst ones. People who opposed the concept of a women-led Ghostbusters film attacked the stars at every opportunity, organized to tank the film's reviews, and even drove comedian Leslie Jones off of Twitter for a time. It was disgusting and abhorrent. Sadly, it was also relentless. Though the backlash begun immediately after production was announced, it's now a year and a half since the film's release and folks are still talking about it. Now, a crew of badass actors have to announce that they're prepared to take on the hate they're likely to receive, simply for having the gall to star in an offshoot of a beloved dude-heavy property. Fortunately, though, they won't have to do it alone.

It's true that all this troll-fightning preparation might be unnecessary. A cursory glance at "Ocean's 8" mentions on Twitter reveal that 98% of the mentions are glowing. People can't wait to see a diverse group of talented women get to do something other than all get drunk together or die in a cave. Fans are ready to help fight for the representation they've asked for, and are eager to defend the immensely talented cast before the critics begin to speak. The cast happens to include Sandra Bullock, Cate Blanchett, Sarah Paulson, Mindy Kaling, Rihanna and more; Were they to take a cruise together, the core eight could bring their respective awards to use as the ship's anchor if anything went awry. Bullock knows what you might have to say about the movie, but she knows the Ocean's 8 cast is ready to push back with fans by their sides.

Here's the thing: Ocean's 8 is already an important film, and it's crucial that Hollywood not allow the terrible response to the Ghostbusters reboot harm it. When was the last time a big-budget franchise invested in a group of eight women, most of whom are over 30 (hi, Rihanna), and had the male cast members not matter at all?

The tide is turning in Hollywood, with gross dudes being forced out of powerful positions. It's also a turbulent time for the world in general. That's just part of why Ocean's 8 is necessary; Its success will prove everything that women actors and fans have been clamoring for forever. So, go ahead, trolls, and find something to complain about! Take issue with how Sandra Bullock was cast as Debbie Ocean, Danny Ocean's sister. The cast of Ocean's 8 would like to have a word with you as soon as you're finished—if you can make it past their legions of fans first.