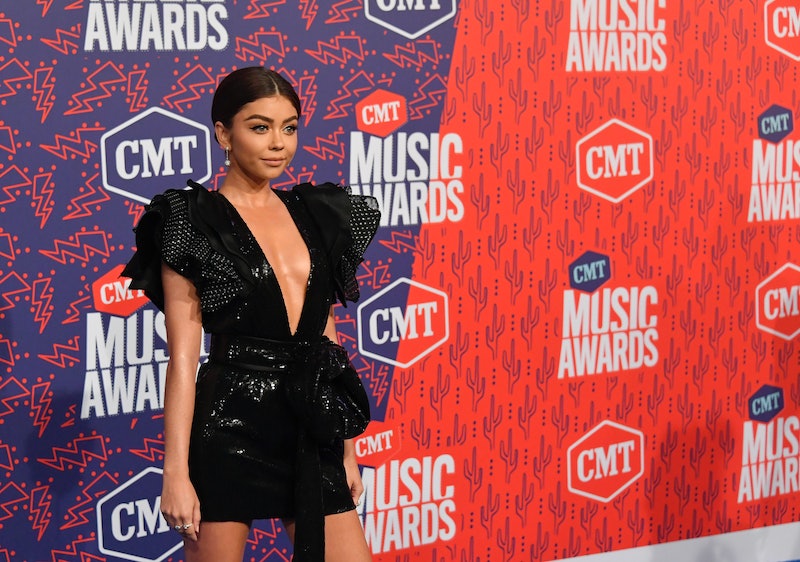 Haley Dunphy has some hot tips for a Bachelor Nation favorite and a "real world" celebrity that have been making headlines this summer. In a recent interview with Entertainment Tonight, affianced couple Wells Adams and Sarah Hyland talked about Tyler Cameron and Gigi Hadid's rumored situation, offering up some very Bachelor Nation-friendly tips to the maybe-couple. Hyland and Wells sure seem to know a thing or two about how to make the post-Bachelorette relationship thing work: The Modern Family actor and the Bachelor Nation veteran have been together for around two years. So, if the Bachelorette Season 15 alum and the supermodel really are in a relationship, just like all those paparazzi photos suggest? It probably would not hurt if they decided to look to the reigning Hollywood star/Bachelor Nation star crossover couple for advice.

Hyland said the pacing of the post-Bachelor Nation relationship can feel quick at first, joking that it seemed like Wells got out of "relationship boot camp" before they started dating. She told ET that "everything seemed to move really fast" when she and Wells initially connected because “[being on The Bachelor/ette] makes you open up faster, makes you more vulnerable to where you get to the really heavy s**t." She continued,

"Whereas normally that would take you, like, six months to get into. And then once you get to that point you’re like, 'Oh f**k. This isn’t working anymore and it’s a waste of six months.' So my advice [is] trust the process. Isn’t that what they say on The Bachelor?”

Wells joked that it will be "a journey," which, as Sean Lowe told Glamour in 2015, is the word producers apparently ask contestants to use instead of "process." Hyland kept the bit going by encouraging them to "trust the process of the journey."

And then, Wells put a bow on it: "The most dramatic dating you've ever had!" You've done Chris Harrison proud.

Tyler C. and Hadid have not confirmed they are dating, but they sure do seem to be enjoying each other’s company. Days after Hannah Brown's After the Final Rose episode taped, they reportedly met up in New York City for a night out on the town, and they have been photographed together no less than a bajillion times since. TMZ even obtained photos of Tyler C. at Hadid’s grandmother’s funeral in the Netherlands, which doesn't not seem like a big step, but what do I know?

If Hadid and Tyler C. do decide to pursue a long-term relationship, there is one couple who is not only familiar with the whole "a Bachelorette alum hits it off with a non-Bachelor Nation celebrity" thing, but really seems to know how to make it work. Hyland and Wells started dating in 2017 some months after the latter acted as bartender on the fourth season of Bachelor in Paradise. On July 16, 2019, the pair revealed they got engaged.