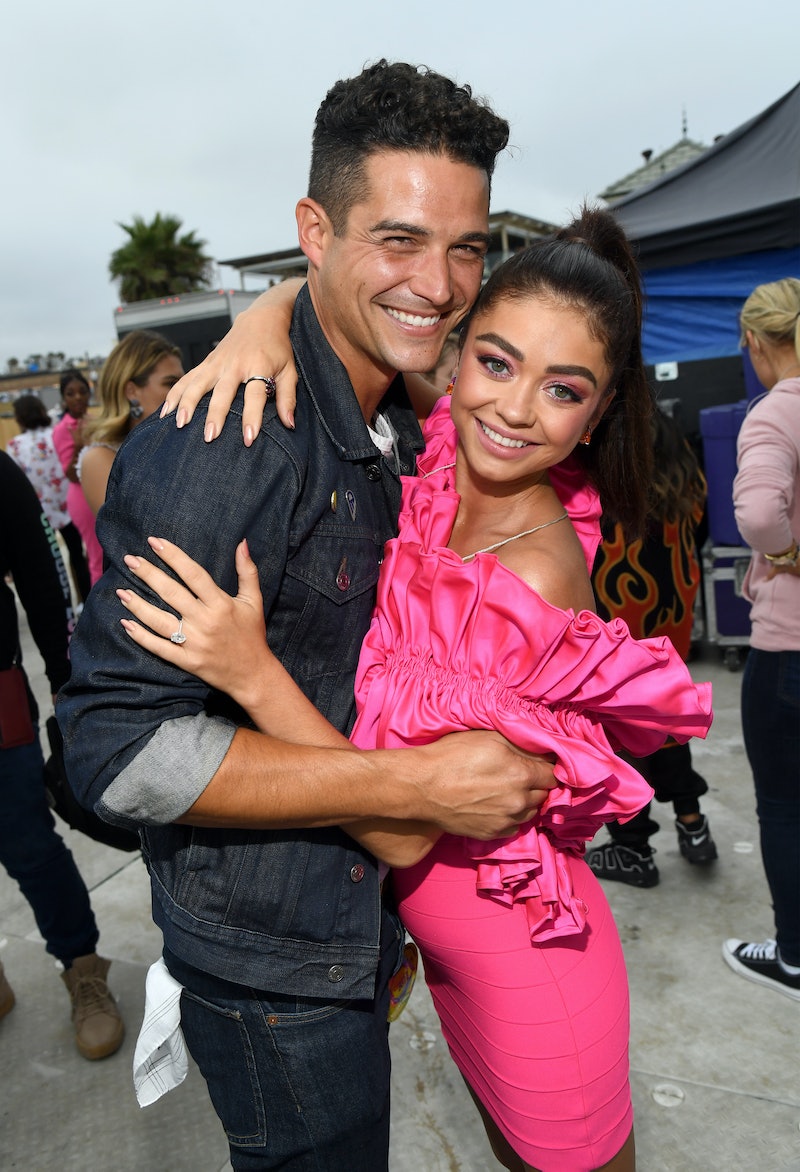 Why bother waiting until Halloween to dress up when there's plenty of time right now and hours of Tiger King to watch for inspiration? That seemed to be the thought process for one famous couple, as Sarah Hyland and Wells Adams made Tiger King costumes and held a social media photo shoot parodying two of the documentary's most famous characters.

On Saturday, April 11, Hyland shared a series of photos on Instagram of herself dressed as Joe Maldonado-Passage (better known as Joe Exotic) in an animal-print shirt and drawn-on beard, while her fiancé rocked a blonde wig and flower headband as his longtime rival, Carole Baskin. "That bi*ch Carole Baskin killed her husband," Hyland captioned the post, a reference to Maldonado-Passage's repeated accusations that Baskin was involved with the 1997 disappearance of her second husband, Don Lewis.

The couple also referenced Lewis' disappearance in the second and third photos as well, in which Adams looks shiftily at Hyland and holds a can of sardines. In the series, Baskin refutes claims that someone put "perfume" on Maldonado-Passage's shoes in order to get his tigers to attack him, explaining that it would make more sense to use "sardine oil or something they want to eat." (Baskin has maintained that she had nothing to do with Lewis' death.)

Hyland and Adams are actually not the first celebrities to showcase their love of Tiger King via a homemade costume; on March 27, Jared Leto hosted a virtual viewing party on Twitter to watch the outrageous documentary series with him. The Oscar winner even dressed up for the occasion, posting photos of himself wearing a Maldonado-Passage-inspired ensemble of a blue and gold shirt, bright red pants, and a cowboy hat. And just like Hyland, Leto also held on to a stuffed lion for the photos, to represent the former zookeeper's tigers.

Since its premiere on March 20, Tiger King has become a phenomenon thanks to its outrageous story about Maldonado-Passage's years-long feud with Baskin, which ultimately resulted in his arrest for allegedly hiring someone to kill the Big Cat Rescue founder. (Maldonado-Passage is currently serving a 22-year prison sentence for murder-for-hire and various animal rights violations.) However, in addition to that story, Tiger King also chronicles everything from the former zookeeper's 2016 presidential campaign and subsequent gubernatorial campaign to his simultaneous marriage to Travis Maldonado and John Finlay.

The response to the documentary has been so overwhelming that on April 12, Netflix will air a bonus episode of Tiger King hosted by Joel McHale, titled Tiger King & I. "I talk to a lot of people involved in the project — Jeff and Lauren Lowe, Saff, Erik Cowie, John Reinke, and Rick Kirkham — to see what's happened in their lives since the release of the program," the comedian said in a video for Netflix, in which he, too, was dressed in a Tiger King-inspired outfit. "It's eye-opening and hopefully, funny."

No doubt, plenty of viewers will be wearing their own outlandish ensembles when they tune in to see even more Tiger King on April 12.

More like this
Hannah Ann Got Engaged 3 Years After 'The Bachelor' & The Proposal Was Dreamy
By Grace Wehniainen
Zach Reveals The Chaotic 30 Minutes That Were Cut From ‘The Bachelor’ Premiere
By Grace Wehniainen
Brittany Snow Files For Divorce From Tyler Stanaland After 'Selling The OC' Drama
By Grace Wehniainen and Radhika Menon
'Bling Empire: New York’ Star Tina Leung Has A Superhero Alter-Ego
By Alyssa Lapid
Get Even More From Bustle — Sign Up For The Newsletter
From hair trends to relationship advice, our daily newsletter has everything you need to sound like a person who’s on TikTok, even if you aren’t.