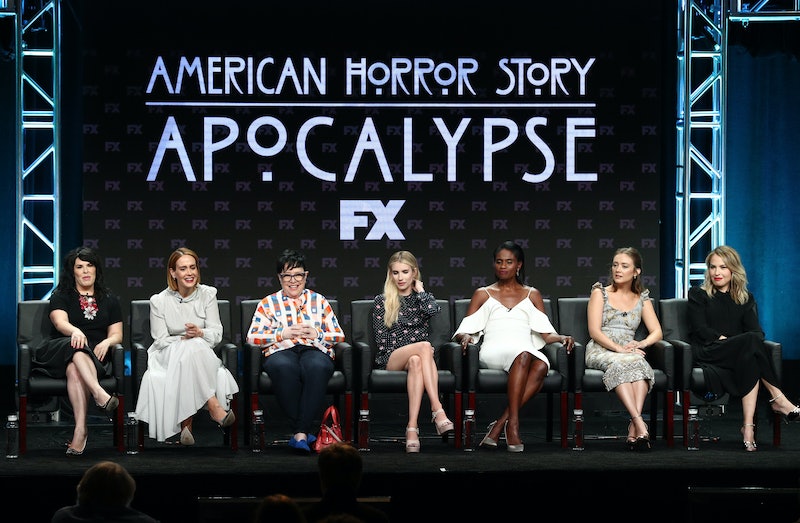 Worlds ended — and collided — in American Horror Story 's latest installment. In fact, AHS: Apocalypse referenced other seasons probably more than any other chapter of the anthology series to date. "There’s definitely a rhyme or a reason and a connectedness to all of these seasons," co-creator Ryan Murphy told Entertainment Weekly in 2014. "Part of the fun of the show is the Rubik’s cube design of it, but, yes, there are purposeful connections, character connections, and similarities and things that connect that we’ll continue to connect moving forward."

Added the Emmy winner, "Hopefully by the end of the run, be it 10 years or 15 years, people will be able to stand back and be able to say, “Oh that was connected to x.”

Now that Apocalypse has officially ended, here is the latest batch of puzzle pieces Murphy scared up for fans this fall.

Obviously, it was never a secret that Apocalypse would be a crossover between Murder House and Coven. The mashup of two of AHS' most popular seasons naturally brought the return of many fan-favorite characters from both Seasons 1 and 3, too. But before viewers got to see any of them, they were first introduced to Michael Langdon who, at the time, many didn't know they'd (kinda) met before.

While it wasn't explicitly stated from the get-go, "Langdon" (played by Cody Fern), fans eventually found out, was the demonic offspring that resulted from Tate Langdon (Evan Peters) raping Vivien Harmon (Connie Britton) in Murder House. There was no shame in having missed that detail, however, since viewers had only briefly seen the now-grown Antichrist as a newborn in the Season 1 finale. Fern, who admitted even he didn't know until two days before filming that his character's story began in Murder House, immediately knew it was a big deal.

"It’s such an iconic role," he recently told Vulture. "Instantly I was aware of the pressure because people have been waiting for him since Season 1."

Although the next reference also could have been a biblical nod to hell-raising Michael, Apocalypse also foreshadowed the impending return of the Coven witches by quickly introducing snakes to the narrative. (Admittedly, there was an episode called "Forbidden Fruit.") Slithering serpents were so much a part of Season 3 that the official Coven promo poster even featured a snake slithering between three mouths simultaneously.

The bewitching trifecta of Coven's Cordelia (Sarah Paulson), Madison (Emma Roberts), and Myrtle (Frances Conroy) did make a grand — and, quite honestly, fabulous — Outpost 3 entrance (to the tune of The Rolling Stones "She's a Rainbow") at the end of Apocalypse's third episode. They, of course, came to resurrect and save their three sisters: Mallory (Billie Lourd), Coco (Leslie Grossman), and Dinah (Adina Porter). This, of course, allowed fans to revisit Miss Robichaux's Academy for Exceptional Young Ladies from Coven via flashbacks. (And who can forget Stevie Nicks' reemergence to perform "Gypsy"?)

While fans knew Murder House and Coven would both be a major part of Apocalypse, they were given an additional surprise when a third AHS season was thrown into the mix. Cordelia traveled to Hotel's titular Hotel Cortez to rescue her student Queenie (Gabourey Sidibe), who was killed and subsequently bound in spirit to the Cortez, in Season 5. Upon arrival, she finds Queenie playing a (never ending) game of cards with another Hotel character: the ghost of James March (Peters). Michael also pays a visit to the hotel, thus melding all three seasons in one episode.

Then came the moment fans had been waiting for: the Oct. 17 "Return to Murder House" episode which brought the triumphant returns of the Harmons (Connie Britton, Dylan McDermott), as well as Constance Langdon (Jessica Lange, who hadn't appeared on the anthology series since the 2015 Season 4 finale of Freak Show). Peters and actor Taissa Farmiga also reprised their Season 1 roles, but fans, of course, had already seen them as different Apocalypse characters already.

In the same episode, Murder House's Billie Dean Howard (one of Paulson's several Season 8 roles) gave a sneaky reference that fans may have missed, further tying together the two seasons. The medium tells Madison that she knew some Montgomerys who had previously lived in Murder House. She was referring, of course, to the murderous Season 1 characters played by Lily Rabe and Matt Ross. Were they Madison's ancestors? AHS doesn't typically include Easter eggs like that arbitrarily.

Let's not forget the importance of the soundtrack either. Patience and Prudence's'50s/'60s song, "Tonight You Belong to Me," acts as sort of a portending entrance theme for Langdon in Apocalypse. Fans with finely tuned ears (or maybe just stellar memories) will likely recall that this isn't the first time AHS has included the song throughout the series though. The old-timey tune played at both the beginning and very end of the Murder House season.

Finally, Coven fans got to see the return of several characters who weren't part of this season's main action. Nan (Jamie Brewer), Papa Legba (Lance Reddick), and Madame Delphine LaLaurie (Kathy Bates, who also played multiple characters) all made cameos. And, yes, even Angela Bassett got her wish to once again bring life (albeit briefly) to her voodoo priestess Marie Laveau.

While AHS continues to add elements from past seasons, there are surely only more treats to come in future seasons.