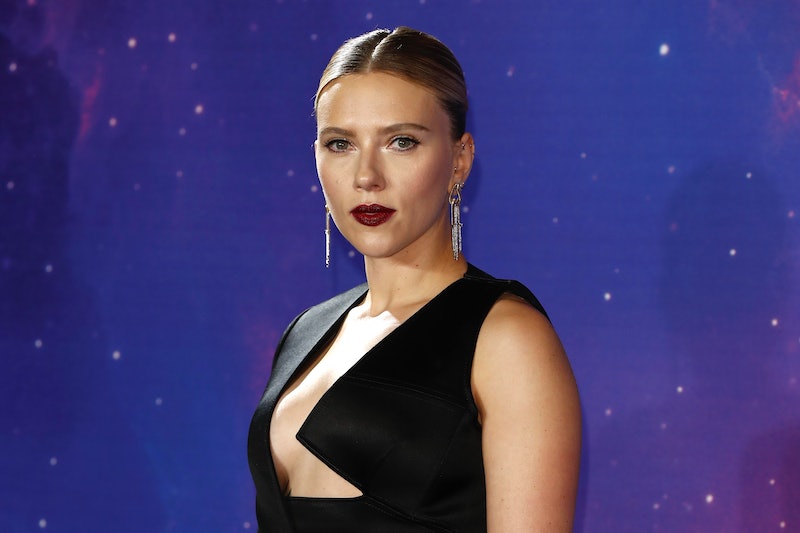 Ever since some of Marvel's most iconic female heroes teamed up to help defeat Thanos during Avengers: Endgame, fans have been hoping for an all-female superhero film to join the Marvel Cinematic Universe, and now, they have another big name on their side. During a recent interview with Entertainment Tonight, Scarlett Johansson said she supports an all-female Marvel movie, regardless of whether or not Black Widow would star in it.

"I completely, fully support an all-female Marvel movie," Johansson told the outlet at the Elle Women in Hollywood Awards on Oct. 14. "I think it could be some cool A-Force thing where you had an opportunity to see all those amazing superheroines all together again." A-Force, the comics series Johansson referenced, features a team made up of some of the biggest and best female heroes in the Marvel comics universe and led by She-Hulk. "It was such a hit when that moment happened in Endgame."

However, Johansson did acknowledge that she might have to settle for just "buying a ticket" to that film, as she's unsure whether or not Black Widow's death in Endgame is permanent. "I don't know what the fate of my character [is], how that all plays in," the actor said, before later joking, "we need a time machine."

This is not the first time that Johansson has shared her desire to see an all-female Marvel movie; in an interview with Variety, the Marriage Story star described the potential team-up as "explosive and unstoppable." Acknowledging that she might not be able to take part in the all-female film because of the events of Endgame, Johansson said, "That group of actresses is so incredibly powerful and when they come together, it’s explosive and unstoppable. So yes, I’m pushing for that. I think audiences want it and I’m definitely one of them."

Her Endgame costar, Brie Larson, helped take things a step further when she told Variety that she and several of the other female stars had approached Marvel Studios president Kevin Feige about making their dream movie a reality. "I will say that a lot of the female cast members from Marvel walked up to Kevin and we were like, 'We are in this together, we want to do this,'" the Oscar winner said. Larson also asked fans to continue lobbying for an all-female movie, telling the outlet that, "if enough people out in the world talk about how much they want it, maybe it'll happen."

In a 2017 interview with CBR.com, Tessa Thompson recalled the meeting in question, explaining that Feige was quite receptive to the idea. Thompson said that she, Johansson, Brie Larson (Captain Marvel), Pom Kementieff (Mantis), Zoe Saldana (Gamora), and Karen Gillan (Nebula), walked right up to Feige one day and pitched the idea. "We thought, 'No, we should just have a whole movie where we know every day we’re going to arrive and get to work together.' So we just ran right up to Kevin Feige and started talking about it," the Thor actor recalled. Feige later shared his own interest in an all-female Marvel movie in a 2018 interview with Vulture.

With so much of Phase 4 and 5 of the MCU still being kept under wraps, it seems like the perfect time to start talking about making the female Avengers movie a reality.

More like this
Anne Hathaway Shared A "Thrilling" 'Princess Diaries 3' Update
By Darshita Goyal
The 'Scream 6' Trailer Shows Off Hayden Panettiere's Return & Ghostface In NYC
By Jack Irvin and Jake Viswanath
Rupert Grint Just Shared A *Major* Update About Ron Weasley’s Future
By El Hunt
'Friends' Star Maggie Wheeler Offers Support To Matthew Perry After Reading His Memoir
By Alyssa Lapid
Get Even More From Bustle — Sign Up For The Newsletter
From hair trends to relationship advice, our daily newsletter has everything you need to sound like a person who’s on TikTok, even if you aren’t.