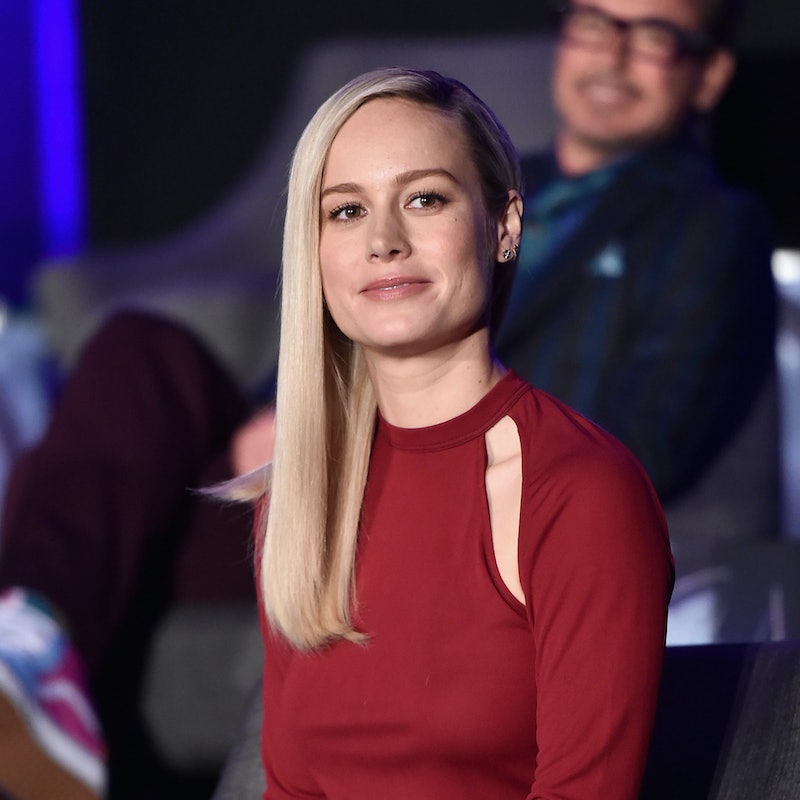 During an interview at her Variety Power of Women cover shoot, Brie Larson continued the campaign for an all-female Marvel movie. The actor, who plays Captain Marvel, revealed that she and some other of the MCU's superhero women even assembled to express their interest to Marvel Studios president Kevin Feige. "I will say that a lot of the female cast members from Marvel walked up to Kevin and we were like, 'We are in this together, we want to do this,'" she explained to Variety in an article published on Wednesday, Oct. 9.

Although Larson noted she has "no idea" what the future holds, she added that the women are "really passionate" about the potential female-centered film. She also made an indirect appeal to fans, saying "if enough people out in the world talk about how much they want it, maybe it'll happen."

In one standout scene from 2019's Avengers: Endgame, Larson's Captain Marvel took on Thanos (Josh Brolin) by joining forces with fellow characters, including: Shuri (Letitia Wright), Mantis (Pom Klementieff), Rescue (Gwyneth Paltrow), Scarlet Witch (Elizabeth Olsen) and Valkyrie (Tessa Thompson). It seems that the powerful moment may have been one of the times Marvel fans got the idea for a possible future MCU crossover. Before Endgame was even released, a 2018 online petition for an all-female Marvel movie had garnered more than 10,700 signatures.

Larson recalled the "great day" the women filmed that scene to Variety, noting the bond they all formed over keeping their work together a secret. Adding that the felt like they "were part of this like coven," she also called the increase in the industry's female ensemble films "this new breath of fresh air for us."

In 2017, Thompson stated in an interview with Comic Book Resources that she and some of the other female actors in the MCU pitched the idea to Feige in 2017. The same year, Danai Gurira, who plays Okoye, told Ellen DeGeneres "it's time we start seeing the perspective of the story come exclusively from women." Then, in 2018, Evangeline Lilly (The Wasp) confirmed to ComicBook.com that there was "talk of an all-ladies MCU movie amongst the MCU ladies." Like Larson, she mentioned that the women would "love to do that" and that they should all "put as much pressure as possible on Kevin [Feige] to make that happen."

It seems that Feige may already be into the idea. He recalled in a 2018 interview with Vulture that, after watching audiences respond to Lupita Nyong'o (Nakia), Wright, and Gurira's action scenes in 2018's Black Panther, he thought "of course you can make a whole movie about that." Feige further explained to Vulture that "it is all about figuring out when and how." (In 2018, Black Panther director Ryan Coogler also teased he'd be on board for a possible spin-off centered on the film's female characters.)

There may not be any firm plans for an all-women Marvel movie just yet, but the studio has a slate filled with upcoming projects that put women in the spotlight. Scarlett Johansson's solo Black Widow film is scheduled to hit theaters in 2020, in addition to Angelina Jolie starring in The Eternals and Natalie Portman playing female Thor in Thor: Love and Thunder. While official release dates have yet to be announced, the forthcoming Disney+ streaming service will include a Ms. Marvel series, with the title character also slated to begin appearing in the MCU, per MTV News. Other forthcoming women-led Disney+ releases also include WandaVision and She-Hulk.

As noted by several of the women of the MCU, the power to make an all-female movie now lies in Marvel's hands.