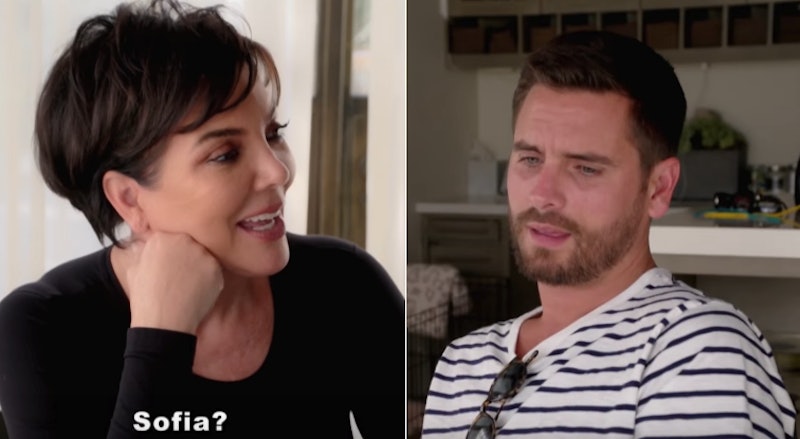 Scott Disick and Sofia Richie have been reportedly dating for months now, but the relationship was never openly talked about by Disick or Richie until now. On Sunday's episode of Keeping Up With the Kardashians (executive producer: Farnaz Farjam), though, Kris Jenner asks Disick if he's dating Sofia Richie — and she asks what the age difference is between the two of them, too.

Disick and Richie were first seen together in Cannes last spring. In May, Richie tweeted, "Just so everyone can get their panties out of their asses, Scott and I are just homies #relax," but it looks like they've become closer since their time together in France. The pair made their relationship Instagram official in September, and they were seen attending Art Basel events in Miami together in December. Still, fans probaly didn't expect to see Kris Jenner ask Disick about the relationship so directly.

In the clip E! shared Friday, Jenner starts the conversation by casually asking Disick if he's dating. When he says that he is, Jenner starts gradually asking more specific questions. "Are you dating one person?" she asks him. Then she asks him if they're "going steady," to which a visibly uncomfortable Disick responds, "I guess that's what the kids are calling it."

At that point, Jenner asks if the person he's dating is Sofia. "I mean, I guess you know who it is," Disick answers.

The conversation doesn't end there, though. Jenner goes all in, inquiring about the age difference between the two of them. "Wait, so how old is she?" Jenner asks. "Because I really don't know. Is she Kylie's age? 20?"

"Nineteen," Disick responds. Jenner then asks if Disick is 32, and he informs her that he's actually 34.

The next part of the conversation is even more surprising, though. Jenner doesn't cast any judgment toward Disick's relationship — instead, she reminds him there was also a significant age gap between her and the late Robert Kardashian. "I was 17, and Robert was 12 years older," she tells Disick.

"You were underage. She's not," Disick responds.

Still, it's clear that Disick would rather not be having this conversation with his children's grandmother.

For the record, Richie's father, Lionel Richie, has also weighed in on the relationship. Back in October, Lionel told Us Weekly that he was "scared to death" about the news.

Still, Disick makes a good point in his conversation with Jenner. Both he and Richie are adults, which means they're allowed to make their own decisions about relationships, including ones with a 15-year age difference.

Disick has been more distant from the Kardashian-Jenners lately, and this clip shows there may still be some tension between him and the family. Plus, this isn't the only awkward moment involving Disick from the upcoming episode. In a clip E! released earlier this week, Disick revealed that he didn't know Kim Kardashian and Kanye West were having a third child until just a couple months before Chicago West's birth.

We'll have to wait until Sunday to see the full KUWTK (executive producer: Kris Jenner) episode and how the storylines involving Disick play out. If any of the other Kardashian-Jenners talk to him about his relationship with Richie, though, I'm guessing they won't be as calm as Jenner was about the situation. After all, Kendall Jenner left a shady comment about the relationship on a fan Instagram account. The comment reads "awww scott and his kids" on a photo of Disick and Richie in a car with Disick's actual kids. So, if the other ladies have similar conversations with him, it will be very interesting to see how they feel about his new relationship.