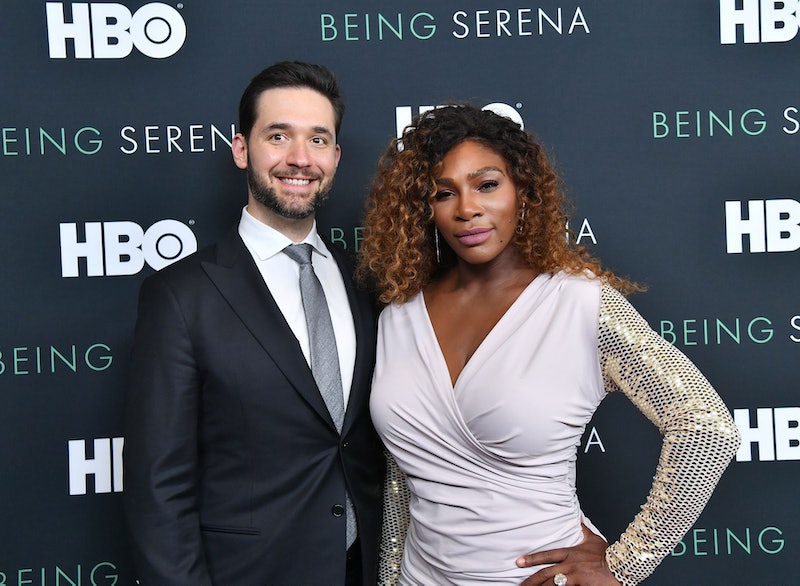 If social distancing has taken a toll on you lately, one tennis legend wants to make it clear that you're not alone. In a since-deleted post on TikTok, Serena Williams revealed that social distancing has given her anxiety and is leaving her feeling "on edge" after spending weeks at home. According to The Guardian, the tennis legend wanted to share the toll that self-isolation has been taking on her on social media, in case other people watching are going through something similar.

"I wanted to take a minute and talk about my experience with corona. It started out with me feeling like: 'Oh it can’t really affect me,'" Williams said, while filming in her bathroom wearing a series of different wigs and skirts. In fact, when the Indian Wells tournament was cancelled in early March, due to concerns about the spread of COVID-19, Williams was excited about spending more time at home with her husband, Alexis Ohanian, and daughter, Olympia.

"And then one cancellation led to another and then led to another and led to all this anxiety that I’m feeling," she explained. "Now I’ve been social distancing for actually a really long time, for probably two weeks now, and every little thing makes me crazy," Williams continued, adding that she feels "on edge" all the time due to her concerns about the coronavirus.

Williams said she realized that her anxiety was taking a serious toll on her when she got angry at her 2-year-old daughter for coughing and sneezing around her. "She coughed, I got angry and gave her a side-eye," the tennis great admitted, before confessing that once she realized she was reacting with anger, "I got sad."

"I was like: 'Is she OK? Is there something wrong with my daughter? Is there anything I can do?'" Williams said, before wrapping up her post by sharing that, "I just don’t know what to do, so instead of being relaxed I’m really under a ton of stress."

Unfortunately, Williams' tennis season is on hold for the foreseeable future, as the ATP and the WTA announced on March 18 that the current "tennis season has been shut down and all rankings frozen" until June 7, according to The Guardian.

Since giving birth to daughter Olympia in 2017, Williams has been incredibly open about the harder parts of motherhood with her fans and followers. In August 2018, the tennis star revealed on Instagram that sometimes, even she doesn't feel like she's being "the best mom" she can be. "Last week was not easy for me. Not only was I accepting some tough personal stuff, but I just was in a funk. Mostly, I felt like I was not a good mom," she wrote.

Williams explained in her post that she likes to share her vulnerable moments with her followers because "talking things through ... let me know that my feelings are totally normal. It’s totally normal to feel like I’m not doing enough for my baby." Though she has spent every day with Olympia since her birth in September 2017, Williams confessed in her post that like all mothers, "I’m not around as much as I would like to be."

In that Instagram post, Williams wrote that she wanted her fans to know that "if you are having a rough day or week--it’s ok--I am, too!!!" and her Tik Tok post about the difficulties of social distancing is another way for her to connect with fans who might feel the same way.

More like this
The 2023 Super Bowl Commercials Feature A 'Breaking Bad' Reunion & Missy Elliott
By Alyssa Lapid
David Beckham’s Controversial Qatar Deal Skyrocketed His Net Worth
By Catharina Cheung
'Breaking Bad' Duo Walt & Jesse Are Back — In This Super Bowl Commercial
By Jake Viswanath
Who Is Allison Williams Dating After Her Divorce? She’s Engaged With A Child
By Jake Viswanath
Get Even More From Bustle — Sign Up For The Newsletter
From hair trends to relationship advice, our daily newsletter has everything you need to sound like a person who’s on TikTok, even if you aren’t.