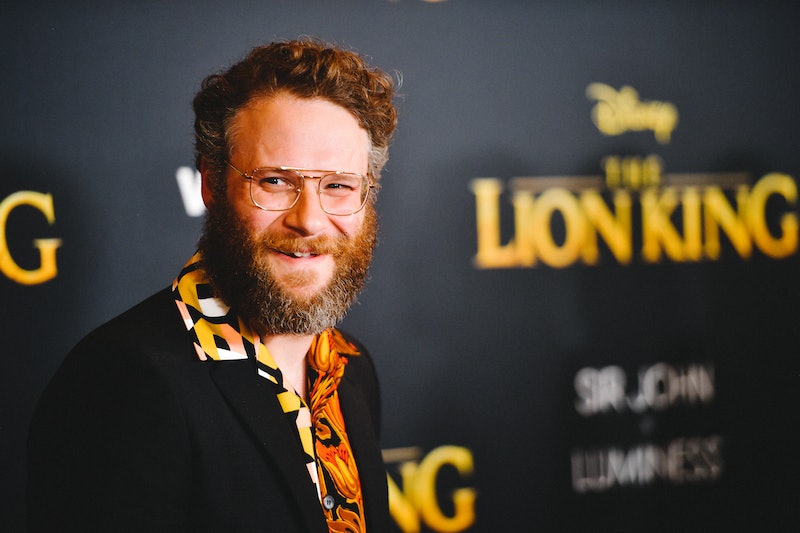 Ever wonder what it must be like to be in the presence of greatness? Like, global greatness. Like, a star who is so widely revered, so endlessly talented, so incredibly iconic in a way that's hard for us mere mortals to comprehend. Well, Seth Rogen opened up about working with Beyoncé on The Lion King during a recent appearance on Jimmy Kimmel Live, and he definitely wasn't immune to feeling star-struck in her company.

So, the new Lion King movie is jam-packed with big-name stars. In addition to Rogen (who voices Pumbaa), Donald Glover plays Simba, James Earl Jones reprised his role as Mufasa, and John Oliver took on Zazu, just to name a few. As big as all of those celebrities are on their own, though, it's hard to compare to the legend that is Beyoncé.

Beyoncé voices Nala in the Disney remake, and Rogen recently explained to Jimmy Kimmel what it was like to be associated with someone of that stature. Spoiler alert: It was just as wild as you might think.

In referencing the film's premiere in Hollywood on July 9, Kimmel noted that Beyoncé was in attendance. "Everyone was losing their mind," Rogen revealed. "I've never seen this happen before in that Jon [Favreau], the director, introduced the cast before the screening ... Beyoncé was called out and the audience stood up and went crazy. I was like, 'She's getting a standing ovation for just existing.'"

He then went on to explain that it seemed as if "her mere presence was a reason to stand and go crazy, and I totally got it." The actor admitted, "I was like, 'Yeah, we should be celebrating. We made it. We're all in a room with Beyoncé. That's what you want.'" Yep, that's the dream right there.

"Did you speak to her at all?" Kimmel asked. "I did," Rogen replied. "I saw her backstage and she came up to me, and — I wasn't going to go up to her, mostly for fear. Last time I tried to approach her ... her security knocked me so hard, that I spilled my drink all over myself. So, I was wary of going near her because I look like someone who you would want to keep away from Beyoncé in general," he joked.

Earlier this month, Rogen and Billy Eichner (who plays Timon) spoke to Variety about what it was like to sing "Can You Feel The Love Tonight?" with both Beyoncé and Donald Glover (aka Childish Gambino, who won four Grammys this year for "This Is America"). "It’s about time," Eichner kidded. "This is the culmination for them of so many years of hard work trying to get to our level. It’s really gratifying that we’ve been able to give them this opportunity."

Rogen then added, "Yeah, I feel good for them. They deserve this break. I can’t imagine how thrilling it must be for them."

All jokes aside, remaking a beloved movie like The Lion King must have been a pretty special experience for everyone involved. It was an instant classic when it originally debuted in theaters in 1994, and now — thanks, in part, to stars like Rogen and Beyoncé — the remake will likely live on in the hearts of an entirely new generation.