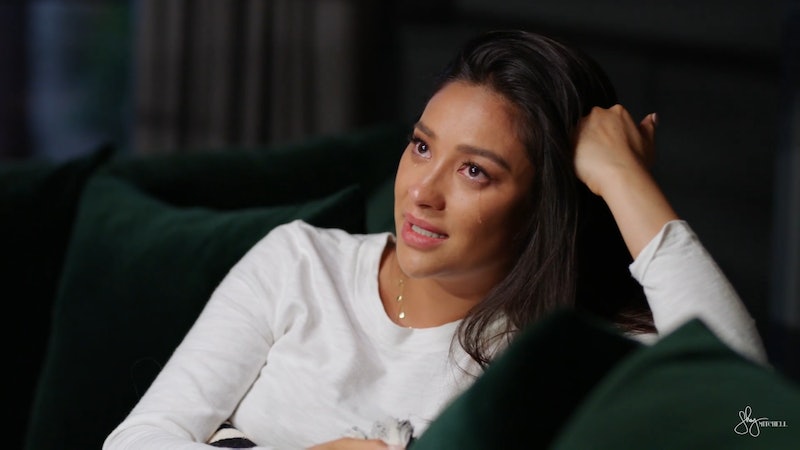 Now pregnant with her rainbow baby, Shay Mitchell bravely opened up about a 2018 miscarriage during the July 17 debut of her new YouTube series Almost Ready. In the episode, titled "Keeping a Secret," the former Pretty Little Liars star tearfully explained that she chose to wait to announce she's currently expecting a daughter with boyfriend Matte Babel "because of the first time."

As Mitchell elaborated in the video:

"I was pregnant last year, Matt and I hadn't been planning, it happened and we were really excited about it. I was like 14 weeks, at that point, I had no idea the percentage of miscarriages. When it happened I was just, completely blindsided by it."

On Jan. 1, Mitchell, who's now about 6 months pregnant, revealed in an Instagram Story that she'd had a miscarriage the previous year. Along with a photo of an ultrasound and a broken heart emoji, she wrote that 2018 was an "amazing year" but "didn't come without some hardships."

During Almost Ready — which will document her navigating the ups and downs of pregnancy — Mitchell noted that she still has the ultrasound photos from her first pregnancy on her phone, as well as footage of her doctor visits.

"It's weird because I haven't looked at them, obviously," she emotionally noted in the episode. "But, it's not like I forgot about that happening, so of course I'm like super happy, but I still feel for that one that I lost."

Continued Mitchell, “I know other women and other friends of mine who’ve gone through a way harder journey. It’s just really tough because you feel broken, as a woman, and that’s not a great feeling.”

The actor's willingness to be so candid now is in line with her openness all along. While sharing the news of her miscarriage, Mitchell explained her decision to share something so deeply personal.

"We all have to deal with various struggles and challenges in life. And sometimes it's easier to only showcase the good times on social media, which is what leads many people to criticize it for its lack of authenticity," she wrote at the time. "The support and affection that so many of you show me lifts me up during even my darkest days, one of which happened last year after I miscarried and lost the child of my hopes and dreams."

As was the case then, Mitchell still has Babel — whom she gushed will be a "great dad" in the Almost Ready premiere — by her side for support. Even so, in Mitchell's Power Rangers-themed gender reveal video, which she uploaded on July 4, Babel admitted he isn't sure he's ready for fatherhood. He's certainly grateful to have Mitchell by his side while he gets there, though.

"Watching the both of you grow over the past 6 months has been the most beautiful thing in the world," he captioned a black and white Instagram photo of Mitchell's bare baby bump on June 29. "The strength, vulnerability and grace you’ve had during this pregnancy has left me in awe, you’re going to be an incredible mom...We’re lucky to have you, love you."

Despite their previous loss, Mitchell and Babel seem to be well prepared to for first-time parenthood. Their willingness to show both the good and the bad will surely also help those who can relate to their journey as well.