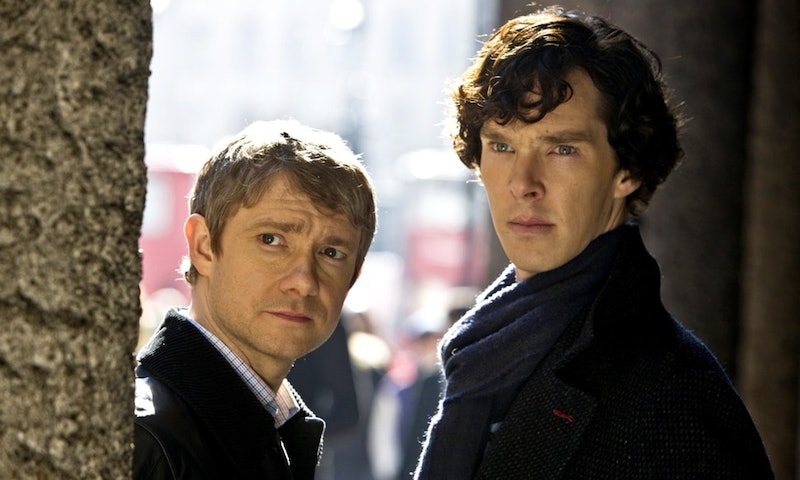 The name Sherlock Holmes is all but synonymous with logic. Sherlock isn't gullible. Through every iteration of the Holmes mysteries, every reboot and retelling and fanfiction story, the world's most famous fictional detective has approached his cases with his patented, holier-than-thou deductive reasoning (or inductive reasoning, if you're going to be a stickler about it).

So Sherlock is famously good at spotting forgeries and finding the truth. But his creator... not so much.

Sir Arthur Conan Doyle was the author of the original Sherlock Holmes series. He was also very into fairies. And ghosts. And pretty much all things supernatural.

Now, in Doyle's defense, he wasn't a total fool. The guy was an ex-med student and his justice advocacy work helped to create the Court of Criminal Appeal. It's just that he also thought his kids' nanny was psychic. He dabbled in séances — especially after the deaths of his first wife, his son, his brother, his two brothers-in-law, and his two nephews, Doyle became (somewhat understandably) committed to communicating with the Great Beyond.

He was a Freemason on and off, and a member of the infamous Ghost Club, alongside Charles Dickens. He presented lectures on spiritualism, and wrote essays for popular paranormal magazines. And he thought he discovered conclusive proof that fairies existed.

Sir Arthur Conan Doyle tried to look at all of his spiritualist beliefs through the lens of "science," but he also liked to ignore evidence when it didn't fit with his worldview. He was good friends with the famous escape artist Harry Houdini, for example. Houdini himself was dedicated to debunking fake mediums, and was pretty public about the fact that his escapes were trickery and skill, not real magic. Despite this, Doyle insisted that Houdini possessed psychic gifts, and that his magic shows were for real.

Their friendship went downhill after Doyle and his wife tried to contact Houdini's deceased mother for him, and presented him with fifteen pages of writing "from his mom." Unfortunately, the writing was in English, a language that Mother Houdini didn't speak, and made no mention of the fact that the séance was happening on her birthday. When Houdini gently tried to point this out to Doyle, the mystery author insisted that it was still Houdini's dead mother, and that ghosts didn't care about birthdays.

The other biggest failure of Doyle's own deductive reasoning was the incident with the Cottingley Fairies. While researching fairies for an article he was writing (because of course he was), Doyle came across a series of photos taken by two young cousins, Elsie Wright and Frances Griffiths. The girls lived in Cottingley, England, and they had apparently snapped photographic evidence of fairies hanging out near their yard.

Elsie's dad was an amateur photographer, and they borrowed his camera for the infamous fairy photos. He dismissed the photos as cardboard cut outs, but his wife fully believed that they were legit fairies, and brought the photos to her local Theosophical Society meeting.

From there, word reached Doyle, and he totally flipped. He had the photos checked out by photography experts, who said that the photos didn't seem doctored, unless the doctoring was very good. To Doyle, this meant that the photos must be for real, because two simple girls from Cottingley could never pull off a scheme that good. Or, as he put it, “I argued that we had certainly traced the pictures to two children of the artisan [working] class, and that such tricks would be entirely beyond them.” (Yikes.)

He then decided to verify the photos for himself, but he was also planning a trip to Australia, so he decided to send Edward Gardner, a dude who ardently believed in fairies and spent the whole trip asking Elsie and Frances questions about how rad the fairies were. The girls even took more fairy photos at his request (although they insisted that the fairies wouldn't come out if adults were around).

This was enough for Doyle to publish two separate articles proclaiming this proof of fairies. The second article was titled “The Evidence for Fairies by A. Conan Doyle, With New Fairy Photographs,” and included a photo Elsie and Frances had taken of a bird's nest with no additional magic to it (the girls just thought it was a cool bird's nest). He later expanded those articles into a book, The Coming of the Fairies.

Doyle's fairy beliefs were met with... mixed responses. There was a lot of mockery, and some cruel cartoons drawn of him. Nevertheless, he insisted that, “There is nothing scientifically impossible, so far as I can see, in some people seeing things that are invisible to others.” He dreamed of a world in which humans and fairies and ghostly apparitions could all kick it together in harmony.

In the grand tradition of young women trying to save a grown man's feelings, Elsie and Frances waited until long after Doyle's death to admit that they'd faked the fairy photos with some sweet fanart of their favorite fairy books and a pre-Snapchat novelty filter (i.e., cardboard cut outs).

Sherlock might be the king of logic and reasoning. But Doyle, with his passion for ghosts and his desperation to believe, was pretty easily bested by two children and some drawings of fairies. So feel free to tell and re-tell stories of the cold, rational hero Sherlock Holmes — but let's not confuse him with his fanciful, fairy-loving creator.

More like this
These 25 International Horror Movies On Netflix Prove Fear Is A Universal Language
By Bustle Editors
10 New Must-Read Books Out This Week
By K.W. Colyard
'Firefly Lane' Season 2 Will Be The Show's Last — But There's A Twist
By K.W. Colyard and Grace Wehniainen
In Elizabeth Strout’s Novels, The World Changes But People Stay The Same
By Morgan Leigh Davies
Get Even More From Bustle — Sign Up For The Newsletter