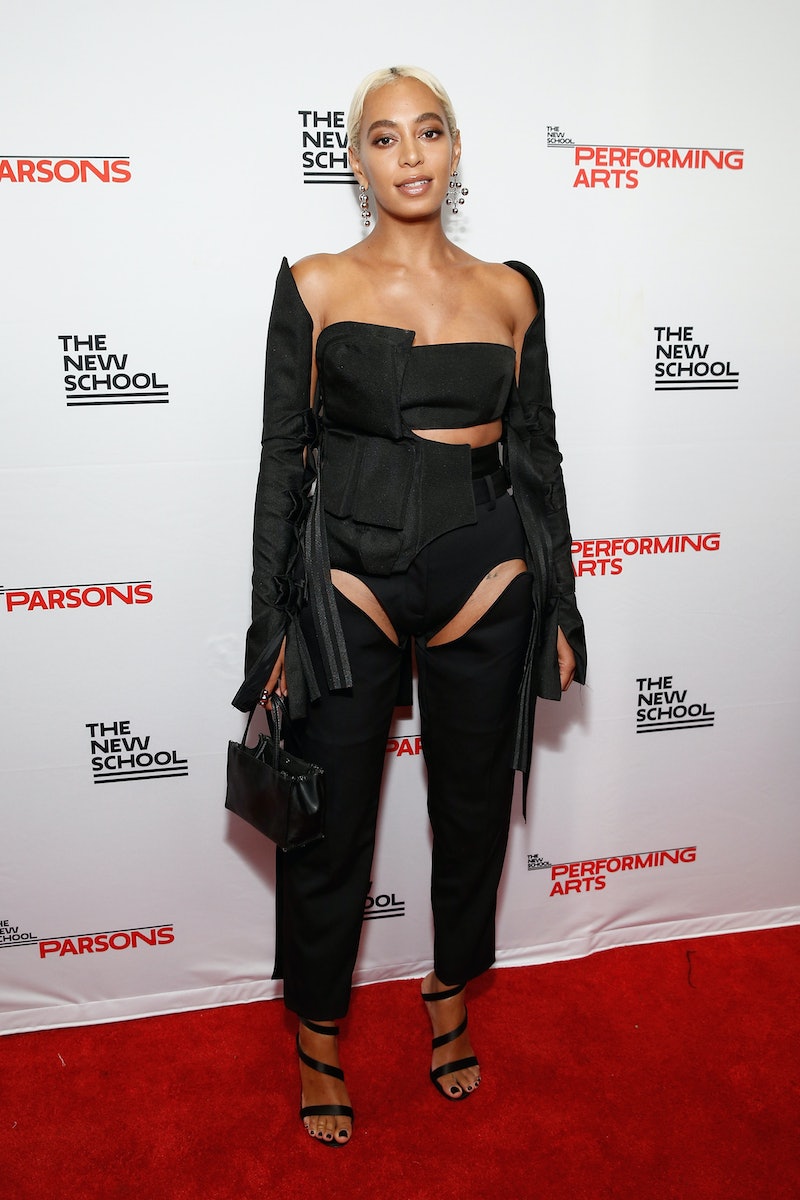 March is Women's History Month and Solange Knowles helped to get the month started off right by dropping her new album When I Get Home on March 1. The album, which was released at midnight, making it the perfect way to bridge the gap between Black History Month (February) and Women's History Month (March). And, in honor of black women, Solange's When I Get Home features cameos from three iconic black female artists. On this new album, the singer, whose last album was the hit 2016 A Seat at the Table, paid tribute to Debbie Allen, Phylicia Rashad, and Pat Parker, using samples from these three artists, who are all from Houston's Third Ward like the Knowles family.

Allen and Rashad are a pair of artist sisters, not unlike Solange and Beyoncé. And they appear on Solange's "S McGregor." In the 19-second interlude, you can hear Rashad say, "And now my heart knows no delight," and Allen say, "I boarded a train, kissed all goodbye." Their appearance on the album is significant, as both women have been trailblazers as black women in entertainment. Rashad, an actor, was Clair Huxtable on The Cosby Show; she has been in both Creed movies; she was a recurring character on Empire; and she was the first black actress to win the Tony Award for Best Leading Actress in a Play. She won for the revival of A Raisin in the Sun in 2004. Meanwhile, Rashad's younger sister Allen is an actress and dancer, who is known for her work in both the movie and TV versions of Fame. She has kept busy since the '80s phenomenon by acting, choreographing, producing, and directing, and she's currently on Grey's Anatomy.

This interlude is sampled from the 1987 Mother's Day TV special Superstars & Their Moms. Hosted by Carol Burnett and her daughter Carrie Hamilton, the special featured celebrities paying tribute to their mothers, including Allen and Rashad, who honored their mother Vivian Ayers Allen. As the South Carolina publication The Herald outlined in 2018, Ayers Allen is extremely talented in her own right, making a name for herself as a poet, playwright, publisher, and educator.

As the sisters explain in the special, they spent a lot of time in museums as children and they "always had a respect for art." So to surprise their mom, they recruited their jazz-musician brother Tex Allen to set music to excerpts from Ayers Allen's Pulitzer Prize-nominated book of poems, Spice of Dawns. Seeing these two talented sisters perform together, starting at around 2:18 in the below video, will inevitably make you think of the Knowles sisters, so it makes sense that Solange would want to honor them on her newest album. (Keep watching after their performance to hear more about how their mom inspired them before the special devolves into corny '80s glory.)

While Allen and Rashad are featured on the second track, Parker's moment doesn't happen until the sixteenth, the "Exit Scott" interlude. As the Academy of American Poets outlined, Parker was active in the civil rights, women's rights, and gay rights movements. After getting married twice to men in the 1960s, she began to identify as a lesbian later that decade, which she addressed in her poetry — like in the poem, "My Lover Is a Woman."

In "Exit Scott," Solange uses audio of Parker performing her work, "Poem To Ann #2." The audio is slowed down (you can compare it to the original that's available on YouTube) so Parker's voice appears deeper than it really was. But Solange's use of this poem is probably many listener's introduction to this significant poet.

Solange also sampled the rapper Scarface on her new record, and the album has contributions from artists like Pharrell, Dev Hynes, Sampha, Gucci Mane, Earl Sweatshirt, Cassie, Tyler the Creator, Playboi Carti, The-Dream, and Panda Bear. But the use of work by Parker, Allen, and Rashad (and thus, Ayers Allen, too), is particularly meaningful since these are inspirational black female artists who deserve the world's praise and attention. And so we have Solange to thank for ending Black History Month and kicking off Woman's History month with a reminder of that.