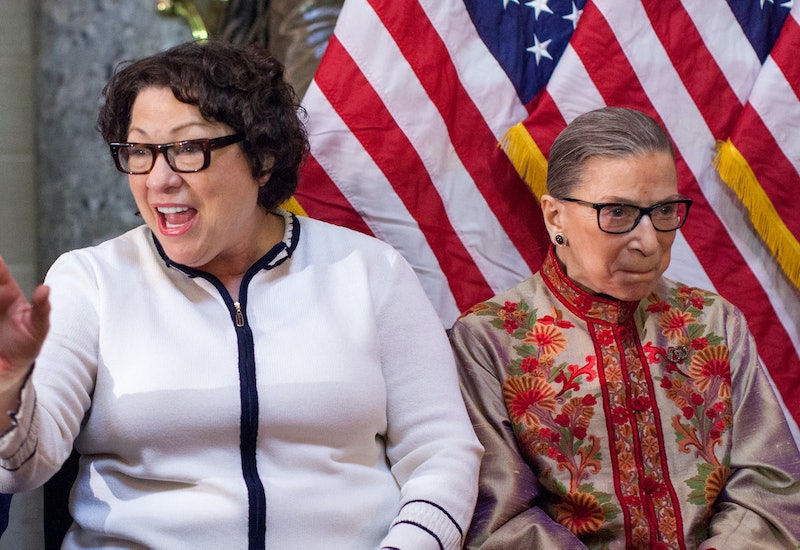 Just a day after releasing a fiery dissent on racial gerrymandering in Texas, Supreme Court Justice Sonia Sotomayor was at it again — with Ruth Bader Ginsburg, the court's resident rock star, alongside her. Sotomayor and Ginsburg's joint dissent on Trump's travel ban Supreme Court decision is a strong statement on religious freedom in the United States, and how they believe the travel ban is hurting that freedom.

"The United States of America is a Nation built upon the promise of religious liberty," Sotomayor wrote in her dissent, which Ginsburg joined. "Our Founders honored that core promise by embedding the principle of religious neutrality in the First Amendment. The Court’s decision today fails to safeguard that fundamental principle."

These two justices had already made it clear that they did not believe that the travel ban was constitutional back in December of 2017. Then, the court allowed the third iteration of Trump's travel ban to go into effect, as the New York Times reported, but Ginsburg and Sotomayor dissented to that majority decision.

Neither of them expanded on their dissent; the unsigned orders from the Supreme Court allowing the ban to remain in place as the challenges in court continued simply said that "Justice Ginsburg and Justice Sotomayor would deny the application."

As the case on the travel ban has filtered through the judicial system, there have been calls for Ginsburg to recuse herself, including an opinion piece in the Washington Post and a letter from numerous House Republicans. This was because of the nature of the case as a direct judgement of President Trump, and Ginsburg's previous negative statements made against the president. Ginsburg had said she couldn't imagine the country with Trump as its president and called him a "faker."

There were no such calls for Sotomayor to step away from this case, but according to Slate, she and fellow justice Elena Kagan did participate together in one of the most memorable exchanges during the oral arguments. Kagan asked Solicitor General Noel Francisco, who was defending the ban, if a president who was an avowed antisemite and had made numerous derogatory comments towards Jews could, constitutionally, place a travel ban on Israel. Francisco, in short, said that it would be constitutional if Israel represented a legitimate threat to national security.

In her dissent, then, Sotomayor wrote that all of Trump's previous statements against Muslims were impossible to ignore in considering the legality of the ban. The decision, she wrote, "leaves undisturbed a policy first advertised openly and unequivocally as a 'total and complete shutdown of Muslims entering the United States' because the policy now masquerades behind a façade of national-security concerns."

"Based on the evidence in the record, a reasonable observer would conclude that the Proclamation was motivated by anti-Muslim animus," she wrote. In the dissent, she made it clear that "the record" included not only Trump's speeches, but also Twitter — which, she noted, contains Trump's "official statements," according to the White House. She also took the dissent to a very human place, saying that the decision was "turning a blind eye to the pain and suffering the [travel ban] inflicts upon countless families and individuals, many of whom are United States citizens."

In her conclusion, Sotomayor referenced the "tragic mistakes of the past," specifically mentioning the famous Korematsu case that allowed for Americans of Japanese descent to be interned during World War II. Her words were strong, and they made it clear that this was a very important decision to her and Ginsburg.

"Our Constitution demands, and our country deserves, a Judiciary willing to hold the coordinate branches to account when they defy our most sacred legal commitments," Sotomayor wrote in conclusion. "Because the Court’s decision today has failed in that respect, with profound regret, I dissent."

Read more on the Supreme Court: