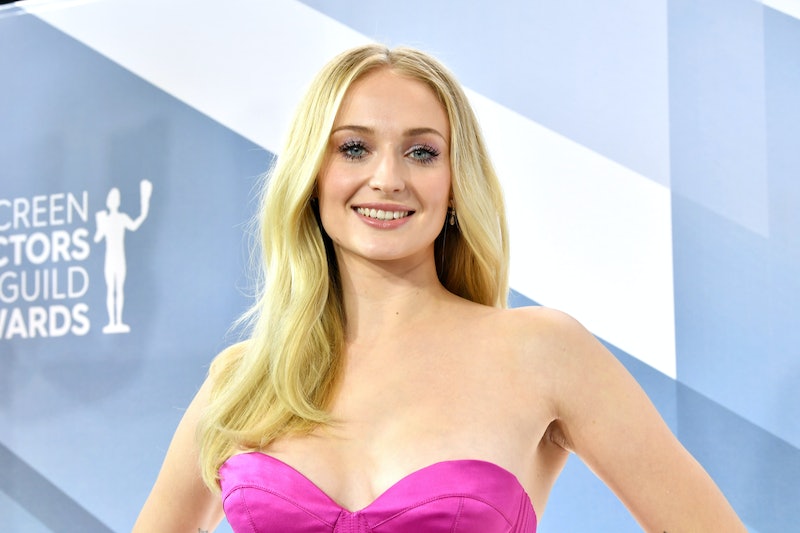 Forget Lizzie and Isabella — Sophie Turner has a much more iconic duo in mind for the upcoming Lizzie McGuire reboot. In a series of videos posted to her Instagram Story on Monday, Jan. 20, Turner volunteered to play Miranda on the Disney+ Lizzie McGuire revival, on the off chance that star Hilary Duff is still looking for someone to play her character's best friend. And, of course, only if the Lizzie McGuire revival is still happening.

"Is Miranda appearing in this season? Because I’m here. I’m available. I am your new Miranda," Turner said in her Instagram story, speaking directly to the camera while lying in bed and watching TV. "Lizzie McGuire people, please reach out to me." Lizzie's free-spirited, fashion-obsessed best friend, Miranda Sanchez, was played by LaLaine in the original Disney Channel series, but didn't appear in 2003's Lizzie McGuire Movie. While Disney+ announced in November that Lizzie's other best friend, Gordo — played by Adam Lamberg — would appear in the reboot, both Duff and the network have yet to reveal whether or not Miranda would reappear.

Even if LaLaine doesn't reprise her iconic role, there's another issues preventing Turner from achieving her dream of starring on the Disney sitcom: Variety announced in early January that the The Lizzie McGuire reboot has been put on hold. "I am obviously devastated, like the rest of us," Turner said about the uncertain status of the revival, though that didn't stop her from shooting her shot at her ideal role.

According to Variety, Disney+ decided to halt production on the series and take things in a "new direction" after the show's creator, Terri Minsky, stepped down as showrunner. "Fans have a sentimental attachment to 'Lizzie McGuire' and high expectations for a new series," a spokesperson for Disney said in a statement to Bustle at the time. "After filming two episodes, we concluded that we need to move in a different creative direction and are putting a new lens on the series."

The news broke just days after Disney+ released the first footage of Duff in the new Lizzie McGuire episodes as part of their 2020 sizzle reel. Duff — who has been heavily involved in the revival — has not yet publicly commented on the streaming service's decision to put Lizzie McGuire on hold. However, on Friday, Jan. 17, the actor posted a cryptic photo on Instagram, which showed her posing outside of a Disney production building. She captioned it simply with an ellipsis, and without a cartoon Lizzie to translate, fans are still waiting to know what it all means.

Now might be a good time for Disney+ to pick up the phone and give Turner a call. If Lizzie McGuire moves forward, it might as well pick up with the Queen of the North on its side.