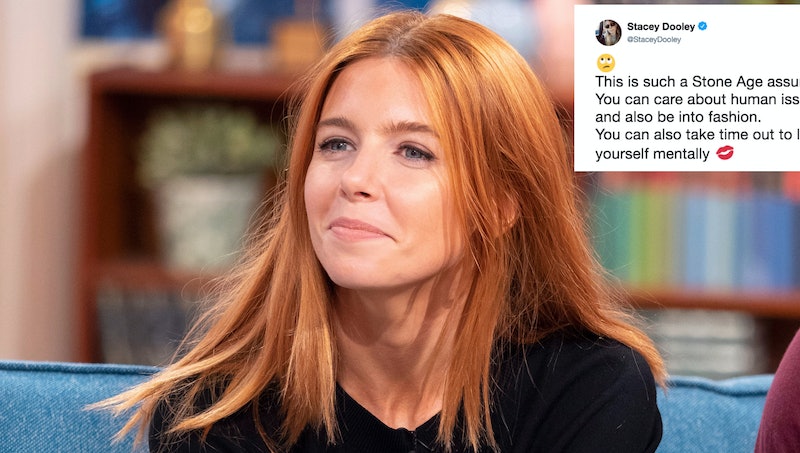 Stacey Dooley won hearts (and votes) all around the country during the most recent season of Strictly Come Dancing thanks to her up-beat personality and remarkable talent. Winning such a huge and mainstream show meant the TV journalist's previous work became more widely known, and gained her countless new followers. Sadly, however, it seems that some of her more established fans have had a few negative things to say of late. And Stacey Dooley's Twitter response to their comments is pretty damn lit.

Any long-term fans of Dooley will know her best for her hard-hitting investigative journalism. She has made several Stacey Dooley Investigates documentaries, covering topics such as drug dealing, politics, rape, sex slavery, and many other seriously dark issues. In doing so, Dooley has opened viewers eyes up to international issues they may otherwise never have known about.

However, these provocative subjects are not at the heart of the uproar. Instead, it's her most recent job that has people up in arms. Dooley has been cast to present a new BBC show, Glow Up: Britain's Next Make-up Star. The series will see ten hard-working contestants competing to win a contract assisting top make-up artists. The show (which looks so lit BTW) is to be judged by Dominic Skinner of MAC and Val Garland of L'Oreal.

So, migrating to a more entertainment-focussed show in an effort to widen your reach as a broadcaster is no big deal right? People do it all the time. You know, "expanding your professional horizons" and all that. Apparently not. Ever since the announcement of Dooley's new job on Glow Up, negative and patronising comments about the show's subject matter have been making the rounds on Twitter.

And, as she herself points out, what the hell is wrong with Dooley getting some space from her usual heavy topics?

The level of condescension and academic snobbery directed towards industries such as beauty and fashion is crazy, and Dooley had a pretty big statement to make about how it. The journalist is fed up of people trivialising creative work, which is an intersectional issue, and wrong on so many levels. Snobbery and judgement really aren't Dooley's thing. And damn straight. Nobody benefits from that.

As anyone who has met any make-up artists or performers knows, the amount of creativity, passion, and steely determination these people demonstrate is just as valid as those in any other industry (academic or otherwise). We live in a time of rapid change and monumental strides for equality. Let's not bash each other. Let's keep things positive and continue to grow. Public figures like Dooley are here to represent people from all walks of life, to keep us informed, and you know what else? To provide top-class entertainment.