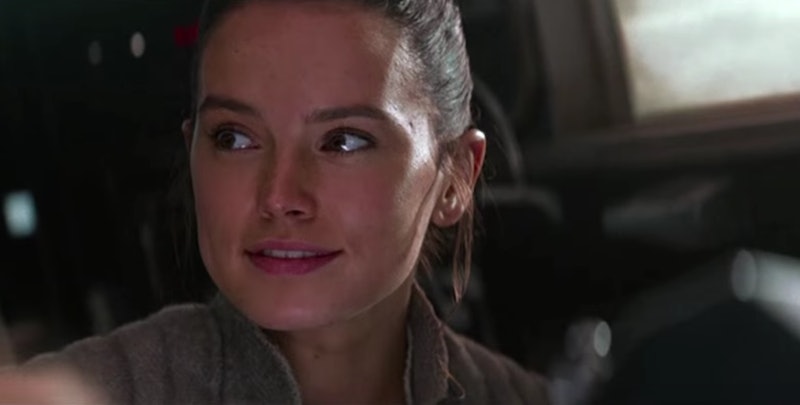 If anyone has the phone number for Lucasfilm, you might want to point them in the direction of an informal study that says female-focused Star Wars films do best in the box office. According to IndieWire, the three canon films with the most screen time for women — The Last Jedi, The Force Awakens, and Rogue One, in that order — also happen to be the franchise's highest-grossing features. (As a side note, Solo: A Star Wars Story wasn't included as a data point, because its May 24 release was so recent; this kind of data analysis is impossible until the film is available for purchase.)

This analysis was undertaken by Scottish author, film lecturer, and feminist Becca Harrison, seemingly working on her own project. Harrison explained her methodology in full in a separate post — an explanation which is necessary because of tricky situations like female droids — but the basics are pretty simple. "I have FINALLY ranked all of #StarWars based on screen time for women," Harrison tweeted to her followers on May 28, continuing, "This is now canon. Don't @ me." And what follows is a list of all nine canon films (minus Solo) and the percentage of total screen time taken up by women in each, topped by 2018's The Last Jedi at 43 percent, and ending with 1977's A New Hope, at just 15 percent.

First of all, it's wild that all but one of the franchise's films are still double digits away from equal representation, and that even the most lady-centric of all of the offerings doesn't quite achieve true balance. But as IndieWire pointed out, the most compelling evidence suggesting the scales might be tipping is right there on the bottom line.

According to Box Office Mojo, 2015's The Force Awakens is the highest grossing Star Wars feature of all time. Breaking the lone female hero trope, it not only starred Daisy Ridley as Rey, but also featured the late Carrie Fisher as long-beloved Leia Organa, as well as Gwendoline Christie as Captain Phasma and Lupita Nyong'o as Maz Kanata, and raked in close to $1 billion in gross. Just behind it are 2017's The Last Jedi, starring Ridley, Fisher, and Christie again, as well as Kelly Marie Tran as Rose Tico and Laura Dern as Admiral Holdo, and earning $620 million. And finally, 2016's Rogue One, which starred Felicity Jones as Jyn Erso and brought in a cool $532 million, filling out the list of top-earners with the third film from Harrison's list.

And while it may not be an official study, the link between box-office earning and female representation has long been proven, so this correlation is unlikely to be a coincidence. In 2015, Arts.Mic took a look at the top 25 films for the years between 2006 and 2015, and discovered that stories about women outperformed stories about men by an average of $45.5 million. A more recent, soon-to-be-published study, performed by actor Geena Davis' Institute on Gender in Media, found that of the top 100 films from 2017, those starring a woman made 38 percent more at the box office than projects with a male lead. And according to Davis, that number is only going up, as she shared in a May 11 conversation with IndieWire's Girl Talk:

"It’s been higher for all of the years that we’ve studied it [since 2015], but now 2017 is just astronomically higher. We researched the same thing for diversity and found that films with more diversity in the cast make more money. It obviously makes sense, our country is just 51% female and 38% people of color, so what’s the deal?"

What she probably means is — why isn't this being addressed more urgently? And that's the age-old question, not just for gender issues, but for all types of diversity. Hopefully, now that representation has been proven to be an issue not just of equality, but of finances as well, it will be the push in the right direction that the Star Wars franchise needs.

It's a road they already seem to be traveling down, as the most female-centric of the studio's films are also its most recent, but as is the case everywhere else, there's still a long way to go.

More like this
Twitter Is Overjoyed By Angela Bassett’s Record-Making Oscar Nomination
By Maxine Harrison
Anne Hathaway Shared A "Thrilling" 'Princess Diaries 3' Update
By Darshita Goyal
The 'Scream 6' Trailer Shows Off Hayden Panettiere's Return & Ghostface In NYC
By Jack Irvin and Jake Viswanath
Twitter Is Identifying With Sally Field & Jane Fonda’s Friendship In New Viral Video
By Jake Viswanath
Get Even More From Bustle — Sign Up For The Newsletter
From hair trends to relationship advice, our daily newsletter has everything you need to sound like a person who’s on TikTok, even if you aren’t.