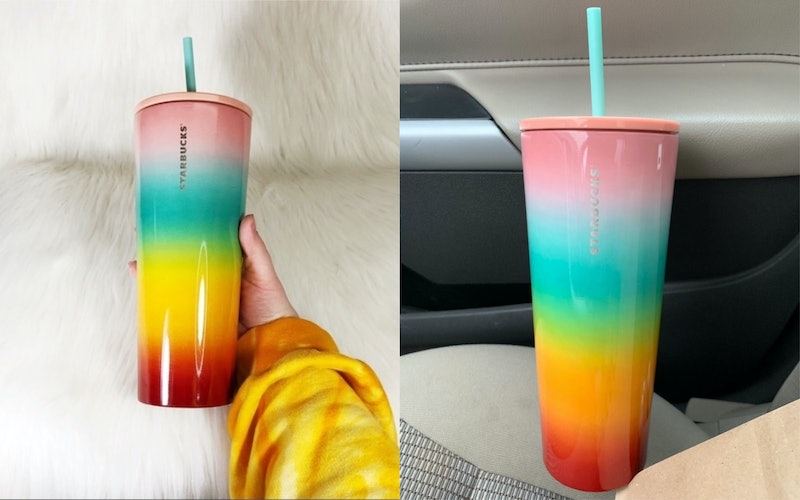 There's been a rumor — at first it was just a whisper, a remote vibration that has been slowly increasing until it's become impossible to ignore. Now, it's become a full-fledged buzz of excitement around one of the biggest drops of the summer. I'm talking about the new Starbucks rainbow tumblers. What are they and, more importantly, where are they?

If you haven't caught glimpses of these unicorn-like, mythical creatures on social media, here's what you need to know. Recently, some totally Instagram-worthy Starbucks reusable tumblers have been appearing on the internet. Rainbow-hued, with lids and what seem to be reusable straws, these look like the ideal way to rock your 'bucks this summer while still helping the environment. Sounds perfect, right?

But here's the thing —  they're proving difficult to track down. It looks like the tumblers have been so amazingly popular that they're being snapped up on sight — and resold for a lot more. So we've seen sightings of these tumblers online, like on Poshmark and Mercari, running at $65 bucks and $39 respectively. Again, these are not official Starbucks listings or even official images — these are just where you can see these tumblers popping up on the internet. But once you see them, it's easy to see why they're so damn popular — colorful and cool, they're like an instant trip to the beach, all in one little cup.

Bustle has reached out to Starbucks for comment on this magical creature and it turns out what we're seeing is the Festival Ombre cup — it is available now in stores, and the 24-ounce cup retails for $24.95. So if you can find it in stores, it's much cheaper than the resale markups we're seeing.

And the people who are lucky enough to have snapped up one of these tumblers seem to be loving them. Twitter has some very happy customers indeed, so feast your eyes on these until you're able to see them in the wild and snap one up for your very own. Or, if you're really dedicated, you can make the commitment and go hunting for one yourself — one Twitter user claimed to visit six different Starbucks before they successfully located the holy grail. This could be the whole Tickle Me Elmo fiasco all over again — but with fewer crying children and broken families. Hopefully. Maybe.

If you can't get your hands on one of these bad boys (yet), don't be too sad — Starbucks has given us an embarrassment of riches to keep us busy this summer. In the reusable cup department, you can get a tumbler that actually changes color when you fill it up, which might even look cooler on your Instagram than the rainbow tumblers. Starbucks also launched a new tiered reward system that can help you load up on freebies and a spring menu that showcases maybe the most epic of all grilled cheese sandwiches. If you're looking for a drink sweet enough to make you feel whole again, you can celebrate the return of the S'mores Frappuccino — I bet it would taste pretty amazing out of a reusable tumbler.

There are a lot of different products that scream "Summer!", but, year after year, a few seem to stand out above the rest. If the current demand for the Starbucks rainbow tumblers are anything to go by, these may be the product of the season. If you see one in its natural habitat, make your move before it's too late.