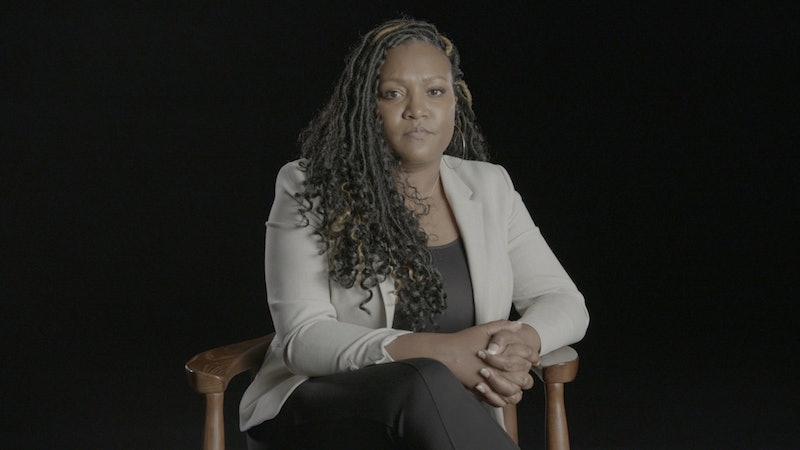 The harrowing documentary Surviving R. Kelly debuted last January on Lifetime, and the six-part series reignited public interest in the numerous accusations of sexual predation levied against singer R. Kelly. With Kelly now facing 13 federal counts of abuse, the sequel documentary Surviving R. Kelly Part 2: The Reckoning introduces even more survivors and explores how overarching systems of patriarchy, historical oppression, celebrity worship, and capitalism go hand in hand to shield a predator like R. Kelly, all while blaming and shaming victims of abuse. (Kelly has denied all accusations.)

While it's not necessary to see the first series to understand what's going on in the second, Part 2 is still just as difficult and potentially triggering to watch as Surviving R. Kelly. It's understandable that someone might not want to sit through yet another six-episode exposé of how Kelly has allegedly hurt and degraded young women, but there are some new and key takeaways from this second round of interviews.

One of the most impactful results of the airing of first Surviving R. Kelly series is how it brought meaningful, national attention to the accusations against Kelly. We learn that in the wake of the first documentary, State Attorney for Cook County Kimberly Foxx announced her office was looking into the allegations, but they needed the cooperation of the victims.

"I am here today to encourage victims of sexual assault or domestic violence related to these allegations to please get in touch with our office," Foxx said in a press conference in January. "Please come forward."

We're introduced to a new survivor, Lanita Carter, a former employee who first alleged an assault by Kelly in 2003. Carter is one of four victims whose accusations helped lead to Kelly's arrest in February 2019, according to State Attorney Foxx.

Carter lays out her story in Part 2: when she was 24, Carter was hired as Kelly's hairdresser. She says that Kelly allegedly always made her wait eight hours in his living room to do his hair (despite it only taking 20 minutes), and then reportedly only paid her $100, which amounted to $20 after her childcare and transit expenses.

Carter saw him as a kind older brother figure despite this, but after Kelly's bandmate hit on her, things took a turn for the worse. Carter alleges that after ignoring her for weeks, Kelly called on her, and when she arrived he demanded oral sex. He then held her down and ejaculated on her. Despite having a strong case against him, Kelly was not charged, and instead Carter was allegedly pushed to take a settlement and sign an NDA.

Another survivor, Dominique Gardner, agreed to go on camera in Part 2. For nine years, Gardner was one of Kelly’s live-in girlfriends — at one point, she was one of six women kept in his house, along with Azriel Clary and Joycelyn Savage — and left in just March 2019. The documentary shows footage of her mom, Michelle Kramer, tracking her down and rescuing her from Kelly's hotel room. Gardner was under 100 pounds when Kramer found her, and she alleges the new short hairstyle is because Kelly would often rip her hair out as punishment. Gardner also alleges Kelly would starve her as punishment.

The end of the documentary is focused on saving Clary and Savage, Kelly's most recent live-in girlfriends. Both women vehemently defended Kelly to Gayle King on CBS This Morning in March, but both appeared to be working off of a script according to people close to them. Both sets of parents viewed their unusual body language and repetitive phrasings as proof they were allegedly "brainwashed" by Kelly.

The end of Part 2 reveals that Clary has returned home (as of three weeks ago) but continues to support Kelly. Savage is still living with Kelly.

The systems that protect Kelly

The reasons for why Kelly has evaded justice for over thirty years are numerous, and Part 2 is a multilayered look at the systems that protect a man like him.

The first barrier is both cultural and historical. Part 2 explores how misogynoir — a term coined by Moya Bailey to explain how Black girls and women suffer from a double layer of both racism and misogyny — plays into Kelly's story. Despite Kelly being the one who's damaging the community by almost exclusively preying on young and disadvantaged Black girls, it's the female victims who are considered disruptive and dangerous for openly accusing him of his crimes.

On top of that misogynoir is the wider culture that is predisposed to disbelieve women, especially when it comes to sexual abuse and harassment claims. This culture of disbelief in turn dis-incentivizes more women from coming forward to report abuse. (Carter herself gives an example of this: despite having Kelly's DNA on her clothes, the cops forced her to reveal a minute detail about his house to prove she was ever there.)

Then there's the overlay of money: celebrities have an incredible amount of capital, and Kelly systematically chose girls from low income families, who often lacked a strong social network, and/or had a background of abuse as his alleged victims. Part 2 explains the difference between civil versus criminal cases, and how Kelly was able to silence accusations for years by simply paying out settlements. (The reason the girls were forced to go to civil court is because, as Ian Alexander said, the criminal courts would ignore the reports due to lack of evidence.)

Then there's Kelly's personal network that worked to protect him. We meet some of his former employees, like Lindsey Perryman-Dunn, who defends Kelly against all accusations. “I worked for Kelly for eight years and never witnessed the abuse these woman are claiming," Lindsey Perryman-Dunn told the Chicago Tribune. "I did witness many women who were Kelly fans and were around him either for the attempt to reach their own fame or just for the notoriety of dating a celebrity."

Many of the survivors in Part 2 explain how Kelly also has an extensive network of supporters who protect him. They allege that these people have released the survivor's nudes anonymously, sent death threats to the women's family members, and reportedly called in a gun threat to the theater where Surviving R. Kelly first premiered.

Kelly wasn't able to get away with all this through only his own resources, though. Part 2 also indicts the industry at large, from questioning the culture of celebrity worship to calling out the Saturday Night Live and Dave Chapelle skits about Kelly for making light of a serious issue. Part 2 paints a picture of how most people — most men — in the industry allegedly knew about Kelly, yet did nothing to really question, accuse, or stop him.

In the documentary, journalist Jim DeRogatis says he knows a total of 48 women who have accused Kelly. Per CNN, Kelly's trial date for the 13 federal charges in Illinois is on April 27, 2020. The New Yorker reports that the Department of Homeland Security is also looking into the accusations.