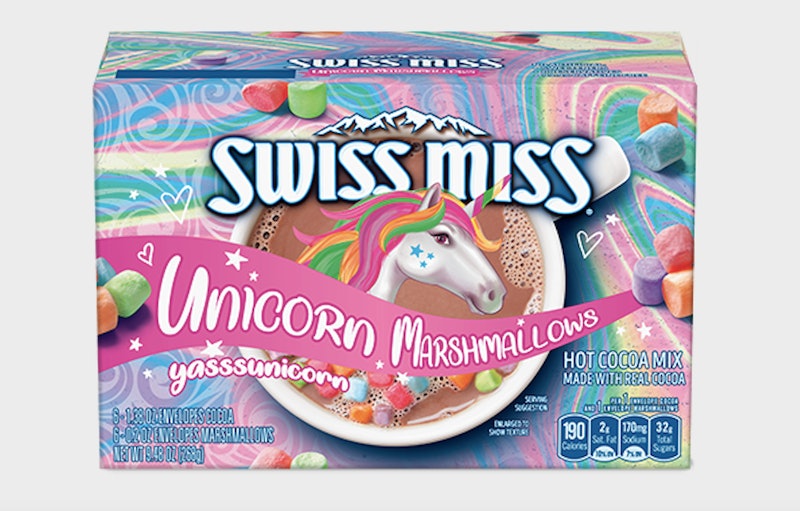 It's not my birthday, but it kind of feels like it. Swiss Miss released Unicorn Marshmallows Hot Chocolate, and I officially don't know how I made it 31 years on this planet with marshmallows that are not unicorn in color — and yes, "unicorn" is a color, as evidenced by the Swiss Miss box and all the other plethora of unicorn-themed things you can buy.

Each box of Swiss Miss Unicorn Marshmallows comes with six packets for hot chocolate mix, and six envelopes of rainbow marshmallows, including purple, pink, orange, and blue, making for the happiest hot beverage you ever did sip. It should be available in retailers nationwide, but doesn't appear to be available for purchase online; if you have a real hankering, though, you can get your hands on Swiss Miss Rainbow Hot Chocolate, which was last year's version of this colorful shakeup, and is still available to purchase online. I don't even care that they both probably taste like regular hot chocolate. I'd buy the unicorn one just for the packaging, which features a unicorn with rainbow hair, a rainbow horn, and stars on its cheeks — a very accurate depiction of exactly how unicorns appear in nature, according to National Geographic. Maybe.

You might assume this is made for children, but even the most adult-y of adults craves a cup of [unicorn] hot chocolate every now and again. And wouldn't this look just darling on your Instagram feed?

The unicorn trend is nothing new, but that doesn't mean we're any less obsessed with it. Swiss Miss is just the latest in a long line of brands to jump on the bandwagon. Sam's Club had a unicorn pool float this year, not to be confused with the dozens of other unicorn pool floats you've likely seen. And while pool floats are great and all, what about a six-foot-tall inflatable unicorn sprinkler? Yup, we had that too, and it was like nothing we've ever seen before. This summer, Walmart also carried pink-and-blue swirled unicorn morsels that are so gorgeous, forget baking with them — I'll eat them straight from the bag. And you can even buy unicorn whipped foam topping online, perfect for cocktails, champagne, seltzer, and even lemonade ... or straight from the bottle, let's be real.

If you're a real unicorn stan, though, you absolutely must head to Target and grab one of their light-up unicorn skulls. Morbid? You betcha! Necessary for your life? Obviously! Kind of defeats the purpose of magical, happy, colorful unicorns, but what else is Halloween for if even unicorns can't get in touch with their inner dark side for a day?

That said, considering this thing is probably going to haunt you and your descendants until someone banishes it from this mortal plane, be sure to grab some of that Swiss Miss magic to keep yourself safe from harm. You should be able to find it in retailers nationwide — for a list of retailers, head to the Swiss Miss website and live your best rainbow life.