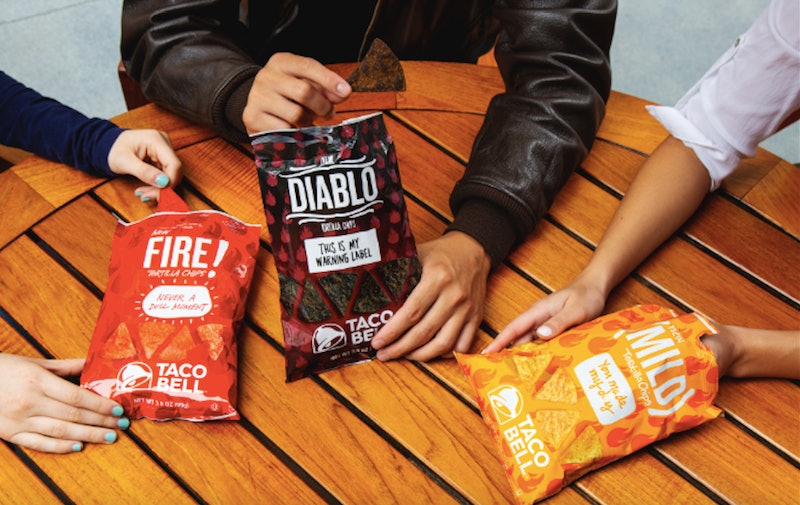 If your taste buds have managed to handle everything else Taco Bell has thrown at them in the last few years, then may I present their latest challenge: Taco Bell launched Diablo Tortilla Chips, based on their famous (infamous??) Diablo Sauce. The new chips take their inspiration specifically from the Diablo sauce packet's "kick of hot peppers and a hint of lime," and also the fact that they're, uh, really freaking hot. So hot that the chip bag doesn't have just one, but multiple warnings on it to let people know what they're in for when they pop one of them open.

So, when and where exactly can you get this delightfully ominous chip? Like the Fire, Mild, and Classic tortilla chip flavors from Taco Bell, which are still available nationwide, the Diablo chips aren't actually sold in Taco Bell locations. Fans of the Diablo sauce packet can find the chip version in participating 7-Eleven stores from Oct. 1 through Oct. 31; the chip will then expand out to other retailers nationwide through the month of November. But be warned, fellow chip consumers: unlike the other Taco Bell chips, this one is limited edition. You're going to want to stock up on these while you can.

Bustle had the opportunity to taste test Taco Bell's Diablo Tortilla Chips before the launch. If you're curious about the flavor, it really does deliver on its similarity to the sauce packet, all the way down to the hint of lime.

For those more curious about the spice factor, this I will tell you: I am a person who cannot handle a lot of spice, but I fared surprisingly well with these — the kick doesn't hit right away, though. It takes a few seconds before it really starts to heat up. If you're a weakling like I am, then maybe take a test bite before going ham, but if you regularly funnel Flamin' Hot Cheetos into your human form, you should be ready to rumble.

As for pairings, as usual, make this a vehicle for guacamole. It will soothe some of the spiciness for people who have smoke coming out of their ears, and also, GUACAMOLE. Enough said.

Good news for anyone who has dietary restrictions, too: like the other Taco Bell chips in the lineup, the Diablo Tortilla Chip is vegan, kosher, and gluten-free; even the darkness of the chip is the result of natural vegetable flavor, and not any artificial dyes. Meaning, this is basically the ideal snack to bring to your office Halloween party, which should probably just be Diablo chip-themed anyway.

This is far from Taco Bell's first foray into death-defying spiciness — just last month, the chain started testing Reaper Ranch Fries that were legitimately made with Carolina Reaper peppers — but these chips, at least, are much more accessible to the spice-loving masses. They currently retail in 3.5-ounce bags, with prices varying based on location. Godspeed, fellow Taco Bell consumers — and don't forget to buy extra guac.