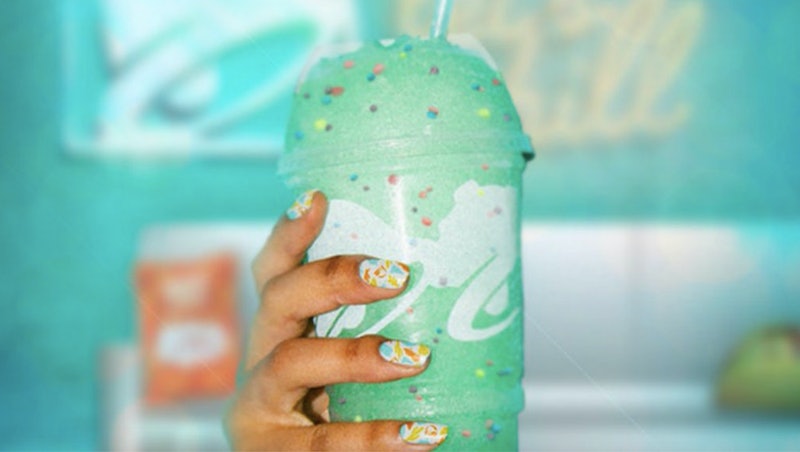 Congratulations to Taco Bell's Mountain Dew Baja Blast, which is nearly old enough to apply for its learner's permit. To celebrate 15 years of serving the iconic drink in stores, Taco Bell is living even more más than usual by serving the new limited edition Taco Bell Baja Birthday Freeze. It is, essentially, a regular Baja Blast that Taco Bell shoved a bunch of candy into, which seems fairly in line for a chain that recently figured out how to shove a full hash brown into a burrito.

To be more specific, the offering — which is a 'grammy sea foam green color that might knock your fall aesthetic off your grid — is filled with "colorful candy confetti." According to Thrillist, it retails for $2.49 for a regular size and $2.79 for a large, but you can get your freaky freeze on for a mere $1 if you go during "happy hour" from 2 p.m. to 5 p.m. (There are two types of people in this world: Starbucks happy hour folk, and Taco Bell happy hour folk. May this be the opportunity to discover which one you are once and for all.)

Taco Bell wasn't explicit about how long the offering would be around, but is describing it as "super" limited edition, in case you needed that extra adjective to stoke your FOMO-induced fear and get you in the door a little faster. The Mountain Dew Baja Blast only turns 15 but once in a lifetime, after all.

Speaking of FOMO, if the Baja Birthday Freeze seems like three words that have taken up space in your brain before, there's good reason why — it was served at the limited edition Taco Bell Hotel that was open for three days in August 2019. "The Bell," as it was dubbed, served numerous Taco Bell mashups and innovations that aren't on the main menu, but a few of them have seen the light of day since — including the Toasted Cheddar Chalupa, now a permanent menu item, forever may she reign.

Here's hoping this trend of experimental menu offerings hitting the main menu continues, because apparently it included an Avocado Tostada, which should have been in my mouth yesterday. But in the meantime we can raise a Baja Birthday Freeze to 15 years of brain freezes in Taco Bell parking lots and turning your tongue an alarming shade of blue.