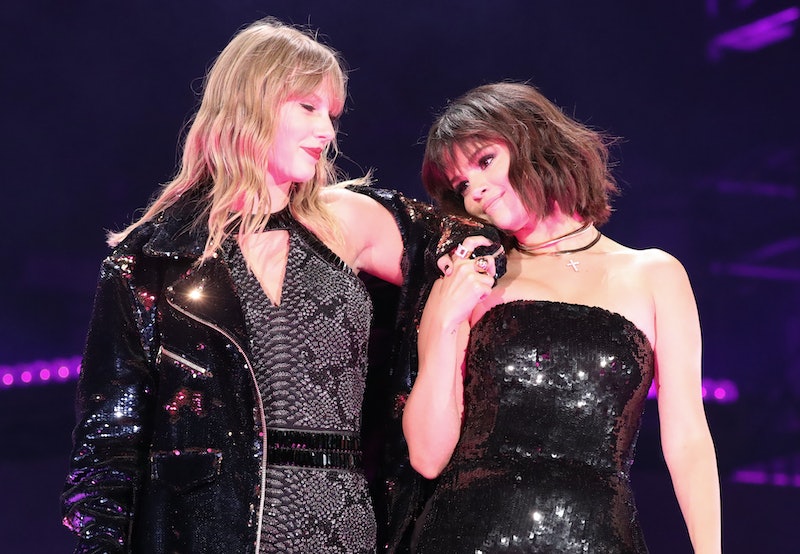 Taylor Swift's battle to own the rights to her music is escalating yet again. After the singer a claimed in a Tumblr post that Scott Borchetta and Scooter Braun won't let her perform her old songs, Selena Gomez supported Swift with a message on her Instagram Stories. And she's not the only artist standing by Swift.

In a Tumblr post shared on Nov. 14, Swift claimed that Borchetta and Braun, who bought Swift's masters in June through their purchase of her former record label Big Machine Records, are not allowing her to perform her old hits at the American Music Awards or in her upcoming Netflix documentary. Bustle has reached out to both Borchetta and Braun regarding Swift's claims, but have yet to hear back. However, Big Machine Records did release a statement to Variety denying the accusations.

Swift wrote that Borchetta had said she could use her old songs — if she promises not to re-record them, as she had previously said she would do. She then directly asked fans, "Please let Scott Borchetta and Scooter Braun know how you feel about this." Following this directive, Swift's longterm friend Gomez took to Instagram to share her opinion on the situation. "My heart is so heavy right now. It makes me sick and extremely angry," her statement began.

In her post, Gomez, who is signed to Interscope Records, reflected on the experience of listening to Swift's second record Fearless before it was released. (The Big Machine catalog includes all of Swift's music from the beginning of her career up to and including her Reputation album.) Gomez said Swift's early music "gave a voice to those who didn't know that they had one all along" and accused the executives of robbing Swift of the chance to celebrate her legacy due to greed. "I just want a change of heart," she concluded. "I love you."

Other recording artists are also speaking out in support of Swift on social media. Halsey, who had previously defended Swift in her battle for her masters, took a strong stance in her Instagram Story where she said claimed that Borchetta and Braun are attempting to stop Swift from speaking out by threatening her. "This is just mean. This is punishment," she wrote in a statement shared to her social media. "This is hoping to silence her from speaking about things by dangling this over her head."

Fellow musician, Lily Allen also shared her support, tweeting that she was in "solidarity" with Swift. She added that Swift's current battle was representative of gender discrimination in the music industry and has continued to defend Swift against "unfair" record labels. Tinashe replied to Swift's post saying, "We're with you," and wrote the situation "genuinely genuinely makes me sick to my stomach." And singer-songwriter Sara Bareilles wrote a brief but clear statement that she considers what Big Machine Records is doing as an "outrageous abuse of power and completely unforgivable."

In her post, Swift had also called on fans to reach out to artists who have worked with Braun in the past, which include people like Justin Bieber, Ariana Grande, and Demi Lovato. Hollywood Life reported that some people interpreted Bieber writing about having a "rough" day in his Instagram Story to be about the situation, but that's not confirmed. Grande and Lovato have made no comments online either, although Lovato did defend Braun in June after Swift accused him of being a bully following the purchase of her catalog.

However, Swift has received plenty of support elsewhere on social media from the likes of Gigi Hadid, Bobby Berk, Todrick Hall, and Ruby Rose. As the situation continues leading up to her AMA recognition on Nov. 24, more celebrities are likely to take a stand. But for now, Swift's biggest supporters will have to see if their words will have an impact on the industry.