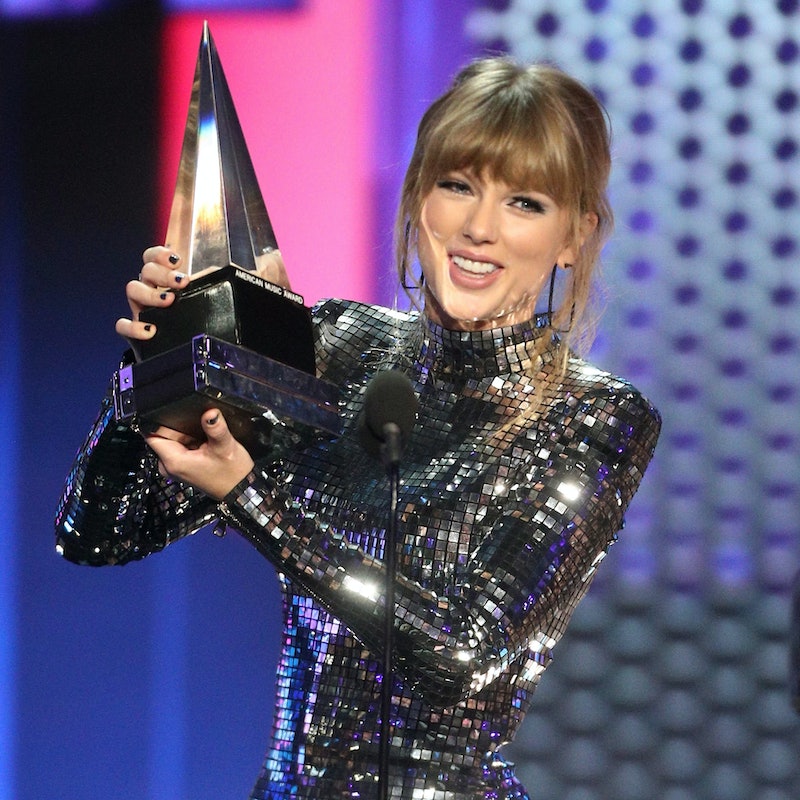 Taylor Swift opened the 2018 American Music Awards with a performance of "I Did Something Bad," but she did plenty of good on Tuesday night too. Winning a total of four awards, Taylor Swift's AMAs acceptance speeches urged fans to vote and teased a new "chapter," causing fans to think that she has a new album in the works. The "Look What You Made Me Do" singer walked away from the night with the highest honor of the night, Artist of the Year, and with the new distinction of being the most awarded female musician in AMAs' history. Beyond her own career triumph, Swift used her platform to encourage people to vote in the midterm elections in November — and she even teased some new music. With her speeches, Swift highlighted the power of the people and showed that her recent political advocacy is here to stay.

At the AMAs, Swift won the awards for Artist of the Year, Tour of the Year, Favorite Female Artist — Pop/Rock, and Favorite Album — Pop/Rock for her Reputation album. In her acceptance speech for the final category of the night, she thanked her fans and then put the focus on the importance of democracy. "I just wanted to make a mention of the fact that this award, and every single award given out tonight, were voted on by the people. And you know what else is voted on by the people is the midterm elections on Nov. 6. Get out and vote. I love you guys," Swift said.

Until recently, Swift had a reputation for keeping her political views quiet. But just two days before the AMAs, she announced on Instagram that she was planning to vote for Tennessee Democrats during the midterm elections in November. "Please, please educate yourself on the candidates running in your state and vote based on who most closely represents your values. For a lot of us, we may never find a candidate or party with whom we agree 100% on every issue, but we have to vote anyway," Swift posted on Monday, Oct. 8.

Swift reminded fans and potential voters that Oct. 9 was the last day to register to vote in her state of Tennessee and voter registration in the state reportedly jumped after Swift's post. Swift's new political activism also caught the attention of Donald Trump, who criticized her music. In her post, Swift didn't mention the current president, but she did write, "In the past I've been reluctant to publicly voice my political opinions, but due to several events in my life and in the world in the past two years, I feel very differently about that now."

Besides Swift encouraging people to vote during the AMAs, she also may have teased a new album in another acceptance speech for Favorite Album — Pop/Rock. "I always look at albums as chapters in my life," she said. "I have to be really honest with you about something. I'm even more excited about the next chapter," Swift added. It sure seemed like she was saying that she has already started to work on her seventh studio album. And her statement prompted fans to start celebrating this news using the hashtag "#TS7."

And while she's still two wins away from being the most awarded artist in AMA history, a promise of a new album likely means that she'll be back giving acceptance speeches before you know it. But in order for her to achieve that milestone, people will have to keep voting for her — although, for now, Swift is far more concerned with you casting your ballot this November.