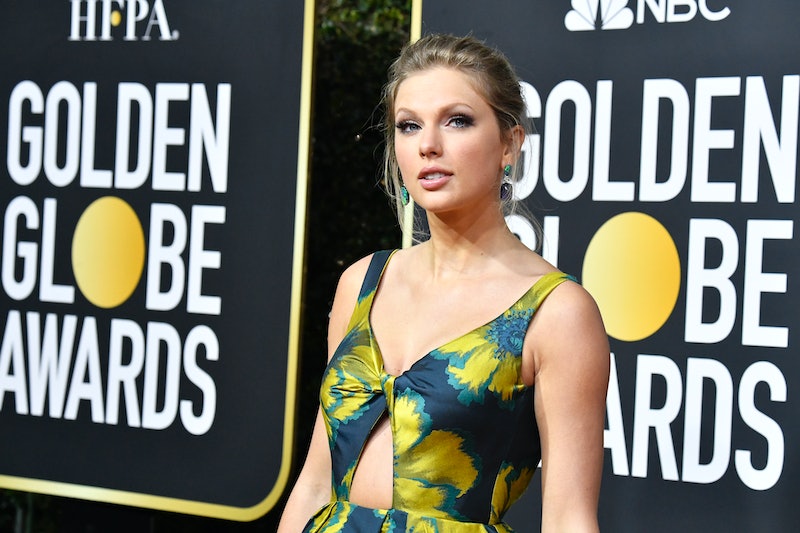 If you're looking for major celebrity fashion moments, the 2020 Golden Globes are the place to see them. The show brings together the best of television and film, but there's also some major musical stars as well. Taylor Swift's 2020 Golden Globes dress delivers Hollywood glamour while also staying true to the colorful and bold aesthetic of her most recent album "Lover."

For the first awards show of the 2020 season, Swift wore a custom ball gown from Etro. The navy jacquard dress featured a bold golden floral pattern and keyhole cutout. The straps of Swift's dress carried into an open back design that ended just below her waist with the floral pattern resuming and moving down into a flowing but structured train.

The look was a marked departure from the many sheer gowns, suiting, and puffy sleeves spotted on the 2020 Golden Globes red carpet. However, the gown was completely in line with Swift's colorful and bold "Lover" album.

The aesthetic of her latest musical releases have been unquestionably vibrant featuring everything from the rainbows of the "Me!" and "You Need To Calm Down" music videos to color-coded rooms and styles of "Lover," Swift's Golden Globes gown is a not-so-subtle nod to her album.

With the patterned dress, Swift kept her accessories minimal, opting for a pair of drop gemstone earrings with navy, emerald, and diamond stones that mirrored one another in alternating patterns. Alongside the earrings, she wore just two rings in matching hues to her gown.

While fans have come to expect Swift in her signature red lip, the singer and nominee for her song "Beautiful Ghosts" with Andrew Lloyd Webber, opted for a pink nude on the red. In another beauty departure, Swift chose a cool-toned look with silvers and purple and fluttery lashes.

While Swift may be attending the Golden Globes for her work on Cats, fans won't miss her subtle nod to her other music thanks to her gown.