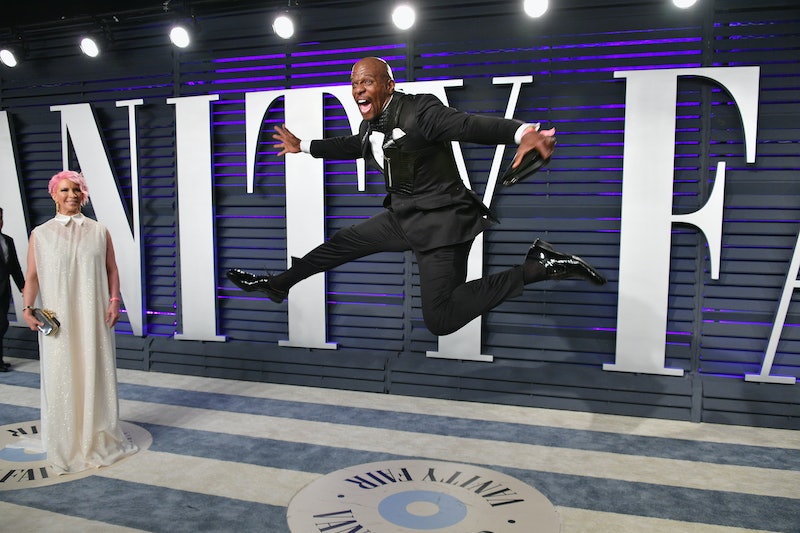 For those keeping score at home, there's another award show harness to add to the style books. Actor and activist Terry Crews wore a harness to the 2019 Oscars, and the style moment just proves he's the biggest badass in film. Not only that, but Crews adds to the growing list of celebrity men to don harnesses to award shows this past year. The edgy style might just be here to stay.

The Brooklyn Nine-Nine actor and America's Got Talent host rolled up to the Oscars red carpet looking dapper in a standard tux and some serious shades. But to accent his completely normal look, he added a patent leather snakeskin harness on top of his suit jacket. Yes, I said snakeskin and patent leather. Can you even deal?

The harness appears to be the same style as the Louis Vuitton harnesses several male celebrities have worn in the past six months to various award shows. It is curves high on the chest and features thick bands of material, taking center stage on top of any tux.

The bondage-like accessory has been a way for daring celebrity men to assert their status as style stars this past calendar year. And, let's face it, some of the sexiest men in Hollywood have been giving the look a go with fearless ferocity.

Crews' harness comes one year after figure skater and Olympian Adam Rippon made harnesses a thing at the 2018 Oscars. Rippon's harness moment broke the internet, bringing leather culture — which is a cornerstone of queer male sexuality — to the red carpet. Not only that, but it ushered in the style moment of men in harnesses. Bless you, Rippon.

Next, actor Chadwick Boseman wore a white harness over a cream suit to the ESPY Awards in July of 2018. His Louis Vuitton harness was slightly concealed by the monochromatic look, but still made waves as a bold statement. Just take a look at this certified lewk.

Actor Timothée Chalamet wore a sequined harness to the 2019 Golden Globes on Jan. 6, leaving basically the whole universe breathless and swooning. Crews apparently took notes on style from this beautiful boy, who rocked a black version of the harness Boseman wore the summer prior.

Right before Crews' fashion moment was heartthrob Micheal B. Jordan in a Louis Vuitton harness. Jordan wore his harness a few weeks after Chalamet to the Screen Actor's Guild Awards on Jan. 27. In a sweet harness-bro moment, Chalamet and Jordan posed for a picture, showing off the most colorful harness we've seen to date.

With Crews bringing the style back to the Oscars this year, the harness trend has made a complete loop around the award show circuit. And, boy, is it a fashion moment worth swooning over. Hopefully the style trend continues on and on, pushing celebrity men to challenge masculinity and fashion boundaries all at once.

If stanning men in harnesses is wrong, I don't want to be right.