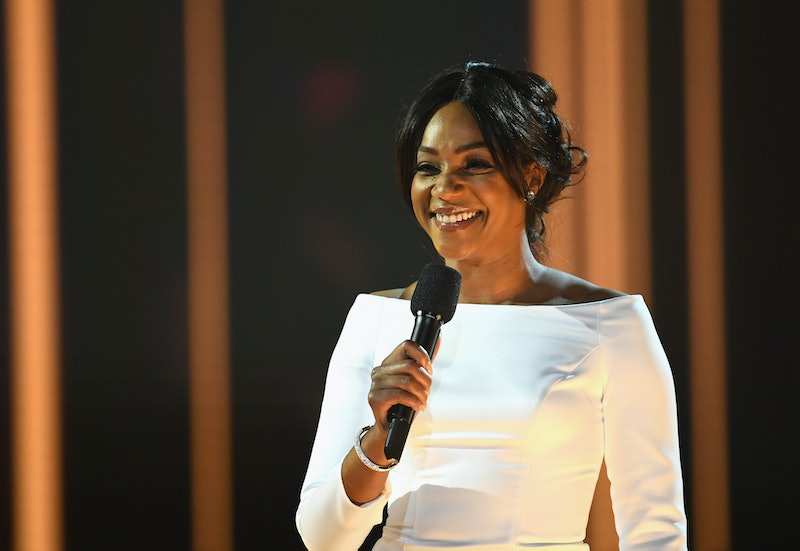 A little over a week ahead of its Monday, Sept. 17 premiere, the 70th Primetime Emmys Awards has already made history — and in a major way. Variety reports that Emmys for all four of the guest starring categories went to black actors for the first time in history, proving that the numerous campaigns for diversity and inclusion in the award show's history have not been in vain.

Not only did Tiffany Haddish make history when she became Saturday Night Live's first black female stand-up comic to host the show, but by picking up the award for the Best Guest Actress in a Comedy category, she's making Emmys history as well. Along with Haddish, actor and comedian Katt Williams won his first Emmy for Best Guest Actor in a Comedy for his dynamic role as the "Alligator Man" in the premiere episode of Atlanta Season 2.

Nominated for the second time, but winning their first Emmys, actors Samira Wiley and Ron Cephas Jones picked up the awards in the Best Guest Actor/Actress in a Drama Series categories — for their roles in Hulu's The Handmaid's Tale and NBC's This Is Us, respectively.

All four Emmys' guest spot awards going to actors of color is a huge win for everyone pushing for inclusive storytelling in the industry, but this doesn't mean that the fight for representation in media is over. Variety pointed out that this year's Emmys event has nominated a total of 36 actors of color within its 40+ categories, which is nearly a 20 percent increase from the previous year. But until counting the amount of nominations and awards going to actors who aren't white-heterosexual-cis-males is no longer needed, there are still strides to be made, both in front of and behind the camera, and more work to be done in terms of fully diversifying across the board.

In case you're unfamiliar, an EGOT is comprised of an Emmy, Grammy, Oscar, and Tony, or as the industry refers to it, the "Grand Slam of Show Business." According to People, only 12 performers have ever been able to EGOT in their career, so yes... this is a pretty big deal.

Hosted by SNL's own Colin Jost and Michael Che, the 70th Primetime Emmys Awards is going to be an event not to miss. So finalize those Emmys watch party plans, because you'll definitely want to witness all of the history-making live.

More like this
What’s New On Netflix: Ana De Armas’ 'Blonde' & A Nick Kroll Special
By Arya Roshanian
What’s New On Netflix: Meet 'The Real Bling Ring'
By Arya Roshanian
Every ‘RuPaul’s Secret Celebrity Drag Race’ Contestant’s Identity Has Been Revealed
By Brad Witter
Confusion Reigns After Kanye Changes His Instagram Profile Pic To Kris Jenner
By Jake Viswanath
Get Even More From Bustle — Sign Up For The Newsletter